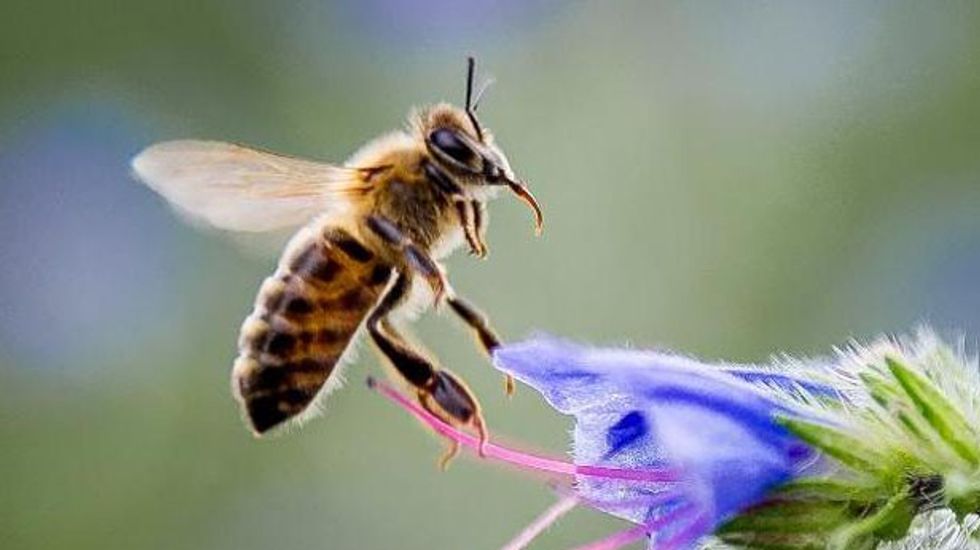 A bee gathers nectar from a flower in Pomarede (AFP)

An exotic parasite is spreading through the world’s honey bees and global warming is making it worse, according to a study that shows it will present increasing problems in North America and Europe.

All animals are afflicted by a wide range of pests and parasites. Many are relatively benign. But for the honey bee one gut parasite in particular is a major risk, especially as summers become warmer.

Bees are fairly used to parasites. A native single-celled (microsporidian) parasite of the honey bee called Nosema apis has probably co-existed with its host for millions of years. Back in the 1990s Ingemar Fries, a world expert in honey bee pathology, visited Beijing where he came across a subtly different and novel variant of N. apis in the eastern honey bee. He named it Nosema ceranae.

Fries thought nothing more of his scientific paper describing the species, until the same parasite was found a decade later in western honey bees (the species native to Europe) in Spain, Taiwan and Vietnam.

This prompted a team of scientists, including me, to search for the parasite in honey bees across the world. If a recently discovered virus had jumped species and was spreading globally, that was big news for us bee experts. By 2007 we had confirmation: it had indeed gone global, being found across the Americas, Africa and Australasia as well as Europe and its native Asia.

This represents a dramatic spread, probably brought on by increasing world trade and the movement of goods, and all within a short space of time – maybe only five years.

Worryingly, the exotic N. ceranae is far worse for western honey bees than the native parasite. It is more virulent and it weakens the bees causing them to die while away from their colony – sometimes leading to total colony collapse. In Spain, the parasite has lead to honey bee colony collapse within 18 months of infestation.

And the exotic virus is displacing its native sister species. We staged competitions between the two in a series of laboratory experiments which demonstrated N. ceranae can indeed outcompete its rival. Our findings are published in the latest edition of the journal of the Royal Society.

For now the exotic parasite remains a rarity in northern Europe and North America. But it won’t stay this way for long. We used a simple mathematical model to analyse the dynamic between the two species of parasite and we found the exotic N. ceranae’s competitive advantage increases the warmer it gets, perhaps a legacy of its origins in the warmer east Asian climate. We predict that, as the world warms, beekeepers in cooler regions will suffer increasing problems.

Though we don’t yet know how to solve the problem of the exotic invader, our research does at least help us to understand why warmer summers may paradoxically lead to great problems for honey bees; forewarned is forearmed.

And it may not only be our honey bees which suffer. Earlier this year we have shown that the exotic microsporidian – unlike the native – is also widespread in bumble bees, so it may cause knock-on problems for our wild pollinators too.

Robert Paxton does not work for, consult to, own shares in or receive funding from any company or organisation that would benefit from this article, and has no relevant affiliations.