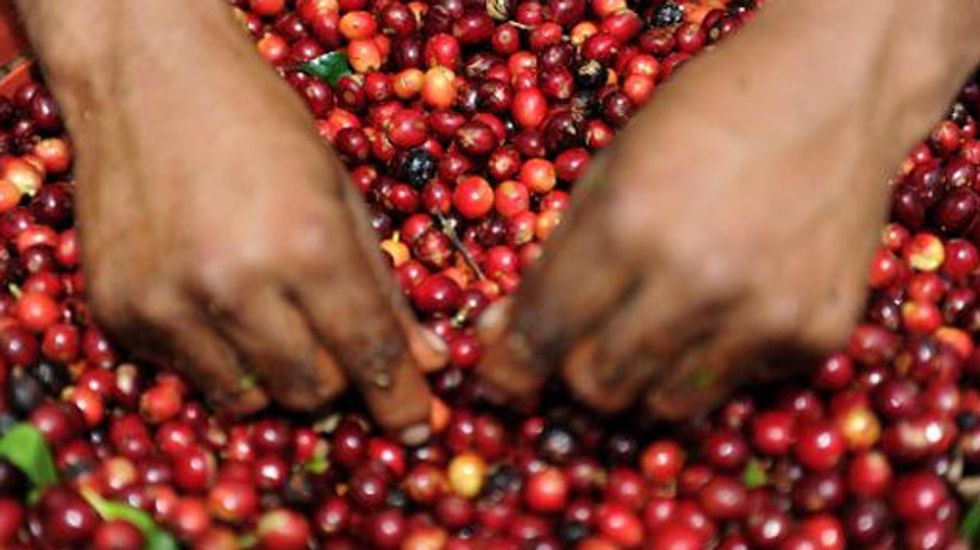 That morning cup of coffee gives many of us a needed boost, but Central American coffee farmers have found a new source of energy in their beans: turning agricultural wastewater into biogas.

An often-overlooked byproduct of the world's favorite stimulant, the water used to process raw coffee beans is usually dumped back into the environment untreated.

In Central America, locals call it "honey water" because of its sweet taste and yellowish color.

Extremely polluting, it is high in methane gas -- a leading contributor to global warming produced, in this case, by the fermentation of the coffee tree's berries.

Across Nicaragua, the 1.3 million sacks of coffee produced annually generate pollution equivalent to about 20,000 cars.

Now a pilot project at 19 farms in Nicaragua, Guatemala and Honduras is treating that water, separating out the methane and using it to fuel electric generators.

"Look how high that flame is," said Sarahi Pastran as she cooked bananas in her kitchen at the La Hermandad coffee cooperative in San Ramon de Matagalpa in Nicaragua.

Her stove was connected to a pipe that ran across her lush yard and connected to a biogas generator fueled by coffee byproducts that used to pollute local rivers.

The project was launched in 2010 by Dutch sustainable farming group UTZ Certified, seeking to use less water in coffee growing and use it more creatively.

"It used to cause a lot of pollution... and it smelled," said Francisco Blandon of the wastewater that his family farm used to produce.

"A lot of families live by the river. They bathe there, wash their laundry. It gave them rashes and intestinal parasites when they drank it," said Blandon, 39, as two of his four children ran around barefoot on the dirt floor of their house about an hour north of San Ramon.

Blandon said he was skeptical when a team of extension workers first tried to sign him up for the project in 2010.

"But they were so insistent.... Less than a month later, it was up and running," he said.

She used to cook with wood that filled her kitchen with noxious smoke. Her husband had to cut down about five trees every season.

The first time biogas came out of the tube in her kitchen, "it was amazing," she said.

"What a surprise when that flame appeared!"

The apparatus to extract the gas costs several thousand dollars. It was 75 percent funded by the Dutch government, 25 percent by local cooperatives.

Water use at the La Hermandad farm has fallen by more than 80 percent, said technical manager Marvin Mairena.

Different farms need different mechanisms to extract methane gas, depending on their size.

Some produce biogas only during the harvest season, others produce it year-round by replacing coffee with animal waste.

UTZ has started rolling out the project in Colombia, Peru and Brazil. It is looking for funds to do the same in Kenya and Vietnam.