Fakeup: How female prisoners in the US 'ad-lib' their cosmetics 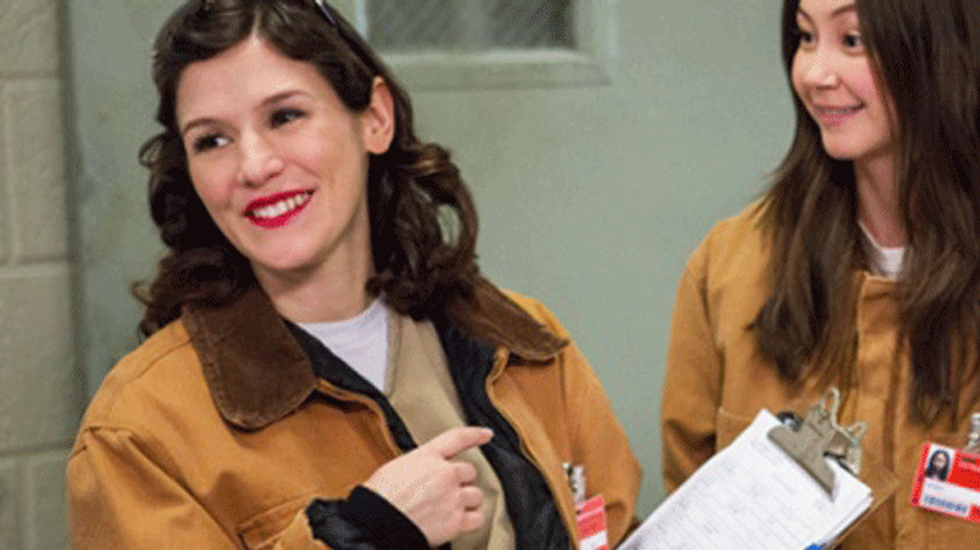 Lipstick and tongs? A scene from Orange is the New Black, season 2 (Netflix/Everett Collection/REX)

In US prisons, women have limited access to cosmetics and hair products. Their only option is to improvise, leading to a phenomenon called ‘fakeup’. Writer Simone Weichselbaum, who originally reported on the story, explains more

Orange is the New Black, the women’s prison drama based on a true story, is due to return next year for a third season, and has been nominated for a handful of Golden Globes. It has also alerted to the world to an important new DIY makeup trend – otherwise known as “fakeup”.

One of the key plots from the second season involved the return of George Mendez, a sadistic prison officer, who jumped on board the newly implemented shot system, which saw inmates get reprimanded for the tiniest infractions, including wearing makeup. Although some makeup is available for the prisoners to buy at the commissary, much of what they use is contraband. Eagle-eyed viewers will have clocked Alex’s twiggish eyebrows, unpencilled when she’s at her most vulnerable; Piper’s increasingly crap hair; a slew of eyeliner. The makeup the prisoners wear is never incidental – it carries important plot information. As the New York Times explained, how makeup is used within the show to “correct and mess up”.

Piper Kerman’s autobiography , on which the TV show is based, examines the role of makeup in prison in some depth. Kerman spent 13 months in prison 10 years ago on felony money-laundering charges. During her time inside, the prison commissary offered “liquid eyeliner, Maybelline foundation, and Great Lash mascara ... mascara and lip gloss went a long way toward making me feel like perhaps I still had something to offer my fiance.” Although as the TV series corroborates, its purpose shifts from confidence-booster to bonding tool.

This year, The Marshall Project , a nonprofit, nonpartisan news organisation, launched with a focus on journalism about the American criminal justice system. Its content makes searing read. Simone Weichselbaum, a staff writer at the publication, sparked an impressive debate after reporting on the role of makeup in women’s prisons. “It might seem glib but it was a way of getting people interested in the rights of female prisoners and prison conditions,” she says.

It was hard to find information, though. She contacted the Federal Bureau of Prisons to ask them what items they had banned. Reticient to divulge information, it eventually transpired that they do sell some makeup, but not a lot. So she contacted ex-inmates through various mediums including advocacy groups

“It’s interesting to see how lipstick and tampons cause such a huge debate. We don’t think about that sort of thing. We take it for granted. Some facilities offer a few shades of foundation, mascara and lipgloss,” she explains. “But as a woman you want multiple colours, hair products.”

Her findings were pretty staggering. Lipstick, it transpired, could be used to transfer narcotics. Jolly Rancher candies were used as hair gel and the pink ink from T-Mobile adverts as blusher. And you won’t believe what you can do with M&Ms. “Mix the sweet candy-coated shells with hot water to make a lip stain. And you can crush the leftover nut — if you’re using peanut M&Ms — into a spoonful of face cream, creating a protein-packed facial mask,” explains Weichselbaum.

There’s a serious side to “fakeup” of course. Access to basics – tampons, some cosmetics – might not seem like a big ask, but, says Weichselbaum, “you could say it highlights a debate as to whether you have rights when you are incarcerated”.