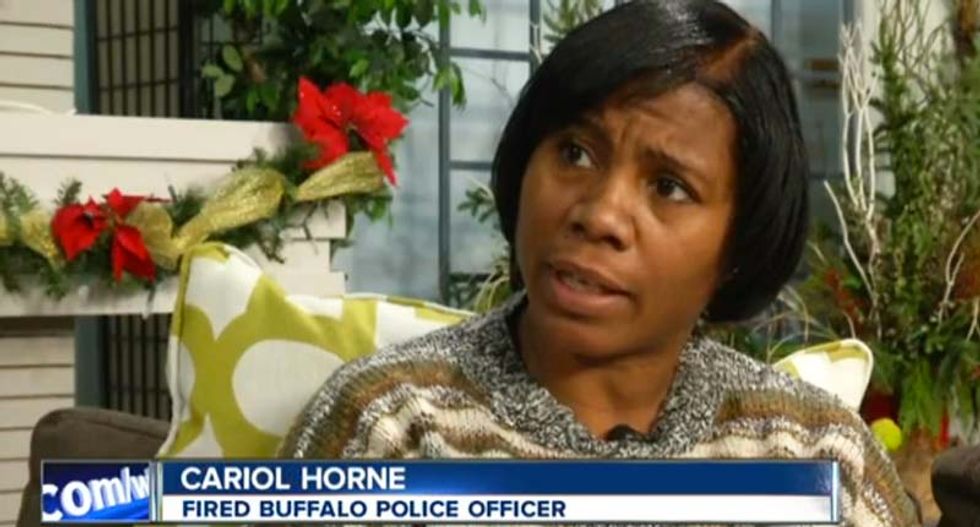 A former Buffalo police officer says she is fighting to regain her pension after being fired for stopping a fellow officer from strangling a suspect, reports WKBW.

According to the fired officer, Cariol Horne, she responded to a call of an officer in trouble on Nov. 1, 2006.

When she arrived she discovered officer Gregory Kwiatkowski arresting a suspect, Neal Mack, who had been involved in a domestic dispute with his girlfriend.

"He was handcuffed in the front and he was sideways and was being punched in the face by Gregory Kwiatkowski," Horne remembered.

Once Kwiatkowski  pulled Mack out of the home, assisted by ten police officers who had responded to the call, Horne said the arresting officer began choking the suspect.

"Gregory Kwiatkowski turned Neal Mack around and started choking him. So then I'm like, 'Greg! You're choking him,' because I thought whatever happened in the house he was still upset about so when he didn't stop choking him I just grabbed his arm from around Neal Mack's neck," said Horne.

According to Horne, Kwiatkowski responded to her by punching her in the face.

"He comes up and punches me in the face and I had to have my bridge replaced," said Horne, who said she then tried to defend herself only to have other officers pull her away from Kwiatkowski, injuring her shoulder in the process.

Following the incident, Horne was fired and charged with obstruction for "jumping on officer Kwiatkowski's back and/or striking him with her hands."

However, in a sworn statement regarding the incident Kwiatkowski said, "she never got on top of me."

Despite that, Horne lost every appeal and with her 19 year career over, losing her pension in the process.

According to Horne, she now works as a truck driver to feed her family.

As for Officer Kwiatkowski, he was forced to retire from the department after being suspended for choking another officer on the job and, in a separate incident, punching a fellow officer while off-duty.

In May 2014, Kwiatowkski and two other officers were indicted for federal civil rights violations against African-American teen suspects.

Horne is continuing to fight for a pension, with the City of Buffalo Common Council sending her case to the New York State retirement system for review.

Watch the video below uploaded to YouTube by WKBW: