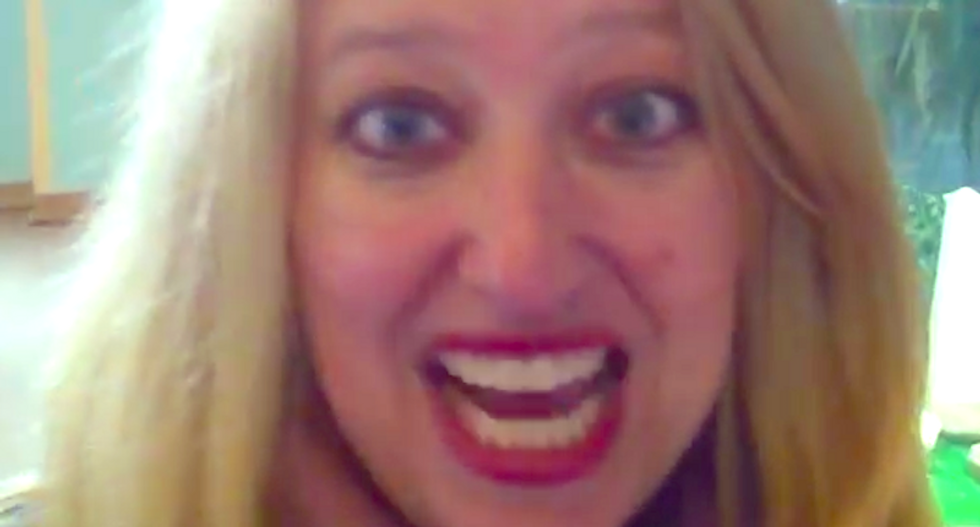 Science-hating homeschooling mom Megan Fox went looking for evidence of dragons and liberal bias -- and found both -- in her video “audit” of a suburban Chicago zoo.

“Look, I found a dragon!” she exclaims as she examines a lizard. “Spikes, claws, scales, nails – it’s a dragon!”

Fox, whose stupefying video audit of a science museum went viral last month, toured the Brookfield Zoo in another series of videos posted on her YouTube channel.

She complains that the zoo is exhibiting “anti-human” prejudice in a display that shows 90 percent of the world’s primates are threatened with extinction due to the actions of one species of primate.

“There are tons of (displays) here that say, you know, humans are bad,” Fox says. “There’s all kinds of anti-human and green initiative stuff that we can look at here, so it’s going to be fun.”

The PJ Media blogger argues, as the camera lingers over the Spanish translation of "water," that a display on water conservation has nothing to do with animals and is instead leftist propaganda.

"This is another one of those things on the Left: 'You are using too much water, you are depleting the water resources, you humans are bad -- we're going to take the H2Oath,'" Fox says. "Come on, this is laughable."

She mocks suggestions she encounters for conserving energy and natural resources as impractical and inconvenient.

After reading the suggestions, Fox and her cameraman read the instructions and discover the items were intended to spur discussion about how individual choices can affect the environment -- which they see as evidence of liberal hypocrisy.

"Instead of teaching them an economic benefit to their behavior, they want to just mandate behavior and control," the unidentified cameraman says as Fox's eyes glaze over. "And dictate and use guilt like an emotional thing instead of just economics of it -- this would save you money if you did this."

The pair then complain about Obamacare, saying that exemption waivers are available to Democratic political donors and other favored liberals.

She and her cameraman agree the suggestions for environmentally friendly living amount to a liberal Bible.

"It's like the 10 Commandments -- it's made out of something heavy, like stone," Fox says, as she turns the pages to a book that's intended to remain outside and withstand the elements. "These are the commandments right here, we found them -- the modern sins."

"These are the sins, and if you commit these sins, you must buy your carbon-credit indulgences," she adds, echoing an observation by her cameraman.

Fox, who is being sued for defamation by an employee of the Orland Park library over an ongoing dispute about online pornography, frequently claims that dinosaurs and reptiles are, in fact, dragons.

She has been posting links lately on her Facebook page of Christmas sweaters that show dinosaurs – which she offers as proof to various nonscientific claims.

“ANOTHER SWEATER SHOWS ALTERNATIVE TAKE on dragons and what they eat,” Fox wrote about a sweater showing a Tyrannosaurus rex eating a reindeer. “This one shows dragons and reindeer interacting. Can scientists prove this never happened?”

Fox, in between posts about the library in a neighboring suburb and the spending habits of its employees, frequently complains about scientists and their methods.

She argued that the recent discovery of a species of frog in New Jersey should undercut any claims to authority by scientists.

“Sure feels like there are a lot of scientists in New Jersey,” Fox said. “But, they missed this frog for all those decades (if not centuries). A few things are always interesting to remember in moments like these: (1) scientists don't know everything and are 'surprised' by something seemingly every day; (2) there are more animals that exist that have not been 'discovered' than scientists would have you believe; (3) if scientists don't know about every animal alive right now then how could they know what animals existed back in the caveman prehistoric days?”

Watch part one of Fox's video audit of the Brookfield Zoo posted online: