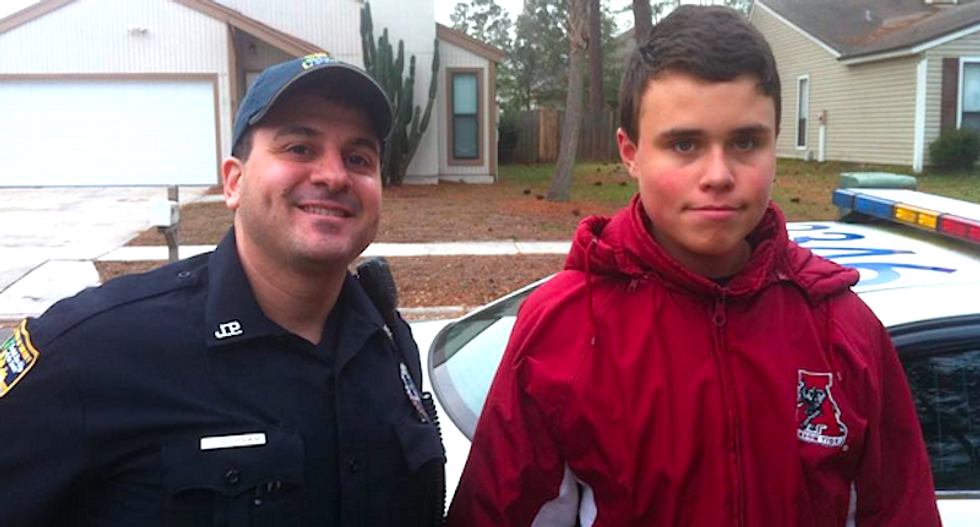 A Florida sheriff's deputy helped brighten a family’s Christmas after their mother was ripped off in a Craigslist scam.

Autumn Beardsley, a single mother of two autistic sons, unwittingly bought an iPhone for $150 that had been blacklisted for previous failures to pay for service, so she was unable to activate the device.

The seller stopped answering her phone calls and responding to her text messages, so she contacted the Jacksonville Sheriff's Office – which told her the case was a civil matter, not criminal.

But the investigating deputy told Beardsley that he would ask his sergeant for permission to buy the iPhone for what she had paid and then attempt to resell it himself to a repair service.

Deputy Chris Behnam told the woman a few days later that his supervisor wouldn’t allow him to buy the phone, but he offered to come by Monday evening so Beardsley’s sons could check out his patrol car.

“I told Kendall and he got dressed and he picked out a police (Lego) mini figure he wanted to give to (Officer) Behnam,” Beardsley said. “He got his phone and went outside and paced and waited for this real policeman to come.”

The boy was recording video when Behnam pulled up, and the deputy flashed his lights for him and let Kendall sit inside the patrol car.

“(Deputy) Behnam then popped his trunk and said he had presents for Cole and Kendall,” Beardsley said. “I immediately started leaking serious water at the sheer thoughtfulness of this wonderful man and his girlfriend, who I never caught the name of, as he pulled wrapped gifts from the trunk.”

Her youngest son is nonverbal, but Beardsley said he smiled broadly and gave the deputy a high-five as thanks for some toy cars.

“Kendall, being moderately autistic, was so happy with the visit and received a light-up police car (he acted like he didn't like it, but was totally playing with it when his brother showed interest...teenagers have to act cool),” Beardsley said.

Then the deputy told Beardsley he had something for her – two bags of cocoa and hot coffee she had previously mentioned to Behnam in a conversation about her 70-calorie mocha recipe.

The deputy’s girlfriend also gave Beardsley a book, "Jesus Calling," and Behnam gave her a Christmas card with $100 cash inside.

“Always trust in the Lord, as he provides for His children,” the officer wrote. “Merry Christmas and God bless.”

Beardsley, a liberal who was brought up Southern Baptist but is no longer active in any church, said she appreciated the religious message the deputy shared with her family.

"He used his gift as a testimony of his faith and and his willingness to comfort strangers in their time of need," she said. "His gifts were exquisite, both spiritually and materially."

Beardsley said she forgives the woman who ripped her off, calling the scam the actions of desperate person, and she hopes her experience with the deputy highlights the good work by law enforcement officers that goes unnoticed.

“(This is) a man who puts his life on the line everyday for us, who isn't jaded or difficult,” Beardsley said. “Perhaps we need more stories of when the police get it right, like Chris Behnam did.”

Edited Dec. 9 at 4:16 p.m. to include additional comments by Beardsley on religion and law enforcement officers.