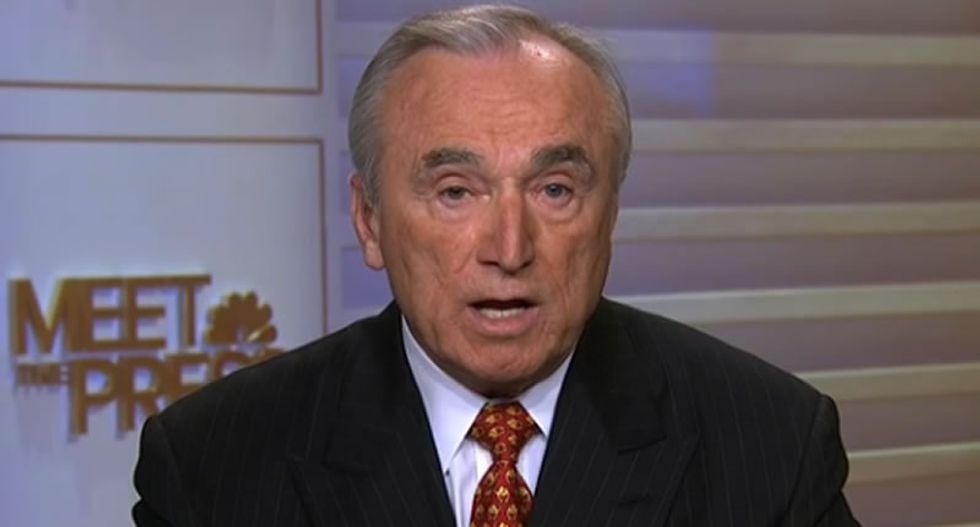 The commissioner of the New York Police Department, Bill Bratton, has given strong backing to Bill de Blasio, denouncing the protest of rank-and-file officers who turned their back on the mayor at a weekend funeral as politicised and inappropriate.

Speaking on CBS on Sunday, the leader of the largest police force in the US came out fighting on behalf of the beleaguered politician who appointed him.

De Blasio has faced expressions of open hostility from New York’s police unions since two officers were killed last weekend. On Saturday a cordon of officers turned their back on the mayor’s image as it was being screened outside Christ Tabernacle church in Queens, where de Blasio was addressing the funeral of one of the murdered officers , Rafael Ramos.

Bratton condemned the silent protest of the police officers. “I certainly don’t support that action,” he said. “That funeral was held to honor officer Ramos, and to bring politics into that event was very inappropriate.”

In the most incendiary comments made since the deaths of Ramos and his partner, officer Wenjian Liu, the president of the NYC Patrolmen’s Benevolent Association Pat Lynch effectively blamed protesters against perceived police brutality and the mayor’s office for the shooting.

“That blood on the hands starts on the steps of City Hall, in the office of the mayor,” Lynch said, just hours after the officers were killed by Ismaaiyl Brinsley, a 28-year-old man with a history of mental health problems and a criminal record who cited on social media the desire to kill police in revenge for recent police shootings of black men.

With so much tension in the air between police, politicians and public following a spate of high-profile deaths – including Michael Brown in Ferguson; Eric Garner in New York;Tamir Rice in Cleveland; and Ramos and Liu – Bratton has become something of a national figurehead in the search for solutions. His appearances on Sunday on CBS and NBC put him at the centre of the debate on policing that has erupted since Brown’s death at the hands of a white police officer in Ferguson in August. Bratton’s visibility was in contrast to de Blasio, who was pointedly absent from the airwaves.

On NBC, Bratton repeated the core theme that he struck in his remarks at the Ramos funeral – that mutual understanding must be found between police and protesters.

“We must find the common ground so that all parties understand the concerns of others,” he said. “Seeing each other, to understand, that means not look past each other, but to really see what is motivating the other.”

Bratton, who is no stranger to controversy having held senior police positions at similar times of strife in Boston and Los Angeles, as well as in New York between 1994 and 1996, sought to dilute the concentrated feelings around the policing issue by casting it as a problem with wide causes.

“This isn’t just about policing,” he said, “it’s about continuing poverty rates, disparity between wealthy and poor, unemployment – there are so many national issues that have to be addressed.”

The commissioner made particular mention of the contract negotiations that are ongoing between New York city hall and the police unions – hinting, though not saying overtly, that there might be a political motivation behind the aggressively hostile stance of the police unions toward the mayor. While the de Blasio administration has reached an agreement with several key unions, including teachers, it is still locked in an impasse with the police unions .

Bratton positioned himself bang in the middle of the raging dispute, as someone who empathised with the parents of black teenagers worried about their children’s interactions with police and with police officers in equal measure. He tried to defuse the NYPD anger around de Blasio’s comment that he had “trained” his own biracial son, Dante, to take extra care in encounters with police officers by saying that attitude was prevalent.

“I interact quite frequently with African Americans from all classes and there’s not a single one that hasn’t expressed this concern,” Bratton said.

On the other side, he also praised the professionalism of the NYPD, which he said had shown “great restraint in the face of incredible provocation”. Police morale, he admitted, was low and he said he expected the rift with the mayor to carry on “for some time”.

A former mayor of New York, Rudy Giuliani, who appointed Bratton to his first stint as the city’s police commissioner in 1994, also appeared on CBS. He called on de Blasio to apologise to the NYPD. Giuliani, who was mayor between 1994 and 2001, said the current mayor, perhaps unwittingly, had “created an impression with the police that he was on the side of the protesters”.

“He should have apologised for the remarks he made that gave the police the impression he was on the other side,” Giuliani said.

Giuliani, a one-time candidate for the Republican presidential nomination , insisted that he was giving such advice in “good faith” and not as an act of political interference toward the Democratic mayor. Once an apology was issued, Giuliani predicted, the stand off with the NYPD would be over.

Watch excerpts from the interview with Bill Bratton below via YouTube.