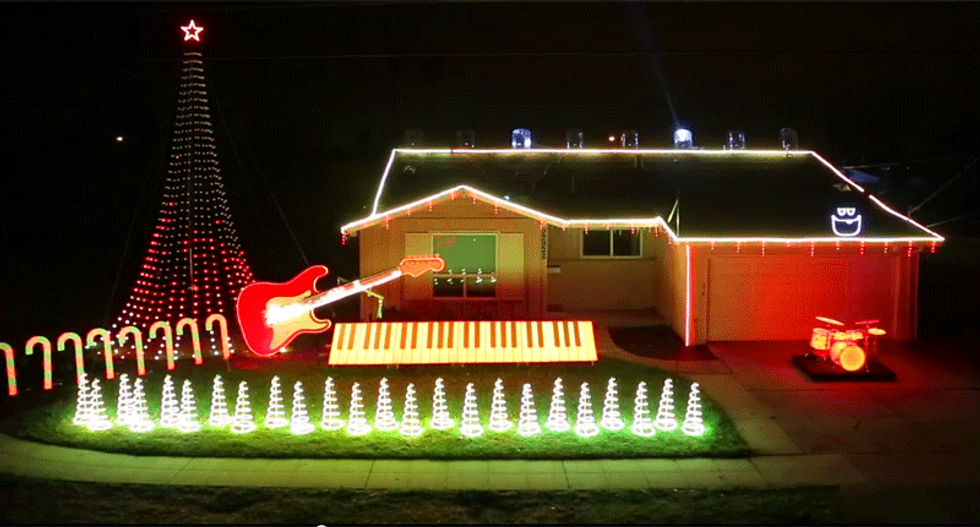 For Tom BetGeorge and his 100,000-light festive display nothing says Christmas quite like sound of light sabres

Residents of a California town are growing accustomed to the sound of lightsabers blasting through their neighborhood each night, as synchronised beams of white light shoot into the sky above their homes.

It is all part of an elaborate, soundtracked Christmas lights display at the home of Newark resident Tom BetGeorge, who makes his living as a music teacher and director. BetGeorge’s holiday lights have been heralded by the London Symphony Orchestra and attracted the attention of lighting designers employed by Disney.

“I find it funny that people say things like, ‘What does this have to do with Christmas?’” BetGeorge said in an email to the Guardian. “In all reality, what do any of our traditions have to really do with Christmas? There were no lights or even a tree to decorate when Jesus was born.”

When he is not working at one of his two jobs, BetGeorge arranges his displays. A video of one such display, scored to a medley of nine Star Wars songs, was posted on YouTube on Monday. By Saturday afternoon it had attracted more than 2.7m views .

“Typically, programming takes me 10 hours per minute of music,” BetGeorge said. “It took me about two months when healthy people sleep to get it done, in between jobs.”

Performances occur most nights from 6pm to 10pm, weather permitting. BetGeorge has eight songs programmed, including Let It Go from the Disney hit Frozen , though he usually only plays five songs a night and plays fewer if there is too much traffic in the neighborhood. Next week, he hopes to upload Daft Punk by Pentatonix, one of his favorite songs.

BetGeorge said Disney lighting designers had called to ask him how he created his displays. The LSO shared the Star Wars video online , writing: “Next time we play this in concert we demand to be accompanied by a light show. ”

One person who saw the show in person told BetGeorge: “This makes Vegas look like a kindergarten show.”

Asked how his neighbors felt about being exposed to such volleys of sound and luminescence each evening, BetGeorge said they were supportive of a project he uses to raise money for the poor and homeless through his church . He said he made sure his lights do not shine into people’s homes or into flight paths.

“I do this because it brings families together to enjoy something for free while raising thousands of dollars for those who are need,” he said.

About 100,000 lights are used in the show, which BetGeorge sequences with a special program for Christmas lights called Light-O-Rama . The display features a 17ft guitar, a 19ft keyboard and a standard-sized drum set. Such props, which BetGeorge built himself, light up in time with the music.

BetGeorge said he had always been interested in creating an elaborate light display, and finally did it after moving into his house two years ago. Last year saw the first such shows, including a performance of Ylvis’ What Does the Fox Say .