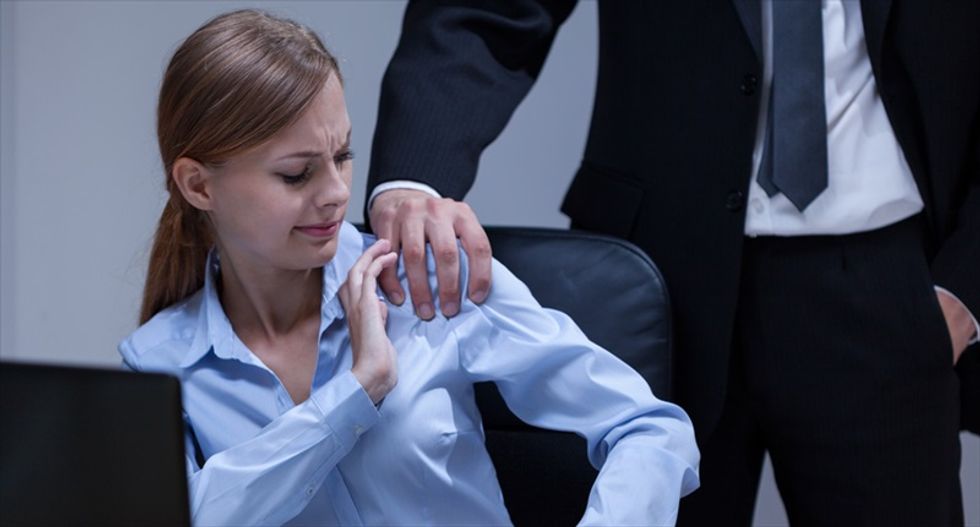 'Sexual Harassment In The Office' [Shutterstock]

A California woman sued her former employer, the online real estate firm Zillow, after supervisors allegedly harassed and propositioned her for sex and subjected her to what she described as "sexual torture," the Recorder reported.

The suit by Rachel Kremer, filed in Orange County on Monday, accuses supervisors at the company's Irvine office of cultivating an "adult frat house" culture and refusing to take action when she reported the offensive behavior. Kremer also accuses the Seattle-based company of firing her for bringing the harassment to light.

"Privately, Zillow executives bragged that the office culture led to more sexual encounters than Match.com, and referred to the internal office directory as 'Zinder,' named after the dating application Tinder," the suit states.

Kremer began working for the company's sales department in June 2012. Her attorneys enclosed copies of lewd messages she received between December 2012 and her termination this past August.

"I have a great opportunity that just opened up on my face in the 92660 market," sales manager Cody Fagnant told her in a text message. "Call me if you are interested. This is an executive position and won't last long. Haha. Goodnight Rachey."

Less than two months later, Kremer's supervisor, Gabe Schmidt, invited Kremer to an event after working hours with a message saying, "Call me. Matt is showering. Thinking 333 dinner drinks and your smooth vagina." Not long after that, Schmidt sent her another text directly asking her, "Wanna blow me and have sex tonight?"

The harassment allegedly continued into this year, when Schmidt sent her a picture of his genitalia in another text message and refused to discipline another employee after Kremer told him he was watching explicit videos at work. The suit also states that Schmidt referred to another female employee as "Rachel 2.0," saying she had "bigger breasts and less miles on her" than Kremer.

Kremer's attorneys argue that she felt she had to take part in the company's culture out of fear of being "outcast" and fired.

"Zillow attempted to cover up their conduct by having Ms. Kremer sign a confidentiality agreement and release," the lawsuit states. "Ms. Kremer brings this action based on the sexual torture endured, and for the other women who have been silenced at Zillow, and remain exposed to horrific and unthinkable acts."

The company told Kremer at the time of her firing that she did not meet her sales goals for July and August 2014. But the suit argues that, besides not being alerted to any performance issues beforehand, that Kremer's productivity was "nearly identical" to that of another employee hired around the time of her termination.

A company spokesperson, Jill Simmons, said in a statement that Zillow is taking the allegations "very seriously."

"When this allegation was first made, we immediately investigated these claims and, as a result, took quick action and terminated a sales employee in our Irvine office," Simmons said. "The allegations in the complaint do not reflect Zillow's culture or workplace and are completely inconsistent with our values. We don't tolerate harassment of any kind."

Zillow currently operates an online real estate directory in conjunction with Yahoo. The company says on its website that it has listings for more than 110 million properties around the country.

The lawsuit, as posted by ValleyWag, can be seen below.