Paleontologists use Hollywood 3D technology to reassess knowledge of Stegosaurus 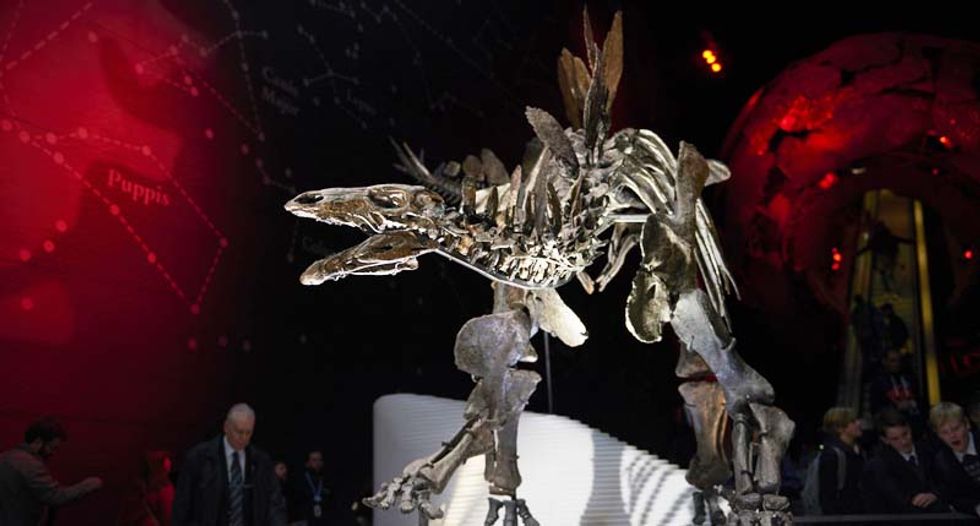 Detail of Stegosaurus skeleton at the Natural History Museum. December 11, 2014 in London. (Shutterstock)

Any small child, including my dinosaur-mad three-year-old nephew, can tell you that Stegosaurus was a large, lumbering, plant-eating dinosaur with large bony plates, menacing tail spikes and a tiny brain. But despite it being one of the most recognizable dinosaurs, most of what we know about these 150m-year-old creatures comes from flat, two-dimensional fossils discovered in the 1880s and known as the “road kill” specimens. There are still many unknowns about things as fundamental as the creature’s weight, what types of plants it ate and what it used those bizarre plates along its back for. We may now get closer to answering some of these questions now that the Natural History Museum in London has acquired, thanks to a group of generous donors, the best-preserved Stegosaurus specimen in the world.

The new Stegosaurus, which was unveiled to the public on 4 December, was found in Wyoming and is unusual in that 80-85% of its body has been preserved. The dinosaur was buried in such a way that its bones did not squash together but remained separate and three-dimensional, so it can be reconstructed in 3D like a giant Meccano set, and positioned in a lifelike pose. Due to the rarity of specimens preserved in 3D, and the loss of bones through natural processes such as scavenging and erosion, many dinosaur skeletons mounted in museums are amalgamations of a number of individuals. It explains too why many skeletons on display are casts, rather than real fossils. Dippy the Diplodocus, the most famous of the dinosaurs in the Natural History Museum, is both a cast and a composite of several different specimens of Diplodocus. Finding high-quality remains of Stegosaurus is particularly difficult as, despite being one of the first dinosaurs to be discovered in 1877, they were quite rare. “These dinosaurs weren’t common, so if you were on a safari in the late Jurassic of North America, they would have been an interesting spot,” says Professor Paul Barrett of the Natural History Museum . This all makes the new dinosaur a particularly exciting find.

But what can palaeontologists do with this new specimen? “Our first job was to describe the bones in detail – this has not been done for Stegosaurus since 1914. From this we can confirm how correct the existing view of Stegosaurus is. For example, this is the first specimen to preserve a near complete set of plates, so we now know Stegosaurus had 19 plates,” says Dr Susannah Maidment from Imperial College London. The really exciting next step is to use some wholly 21st-century techniques from the worlds of film-making, engineering and medicine to help us tackle some big Stegosaurus questions.

The plates that make Stegosaurus so recognizable are highly controversial. Did the dinosaur use them for defence, display or in helping to heat up or cool down? To test these ideas the plates have been scanned using a high-resolution laser scanner and turned into 3D computer models by Propshop, a team based at Pinewood Studios which has worked on projects from Tate Modern exhibits to Hollywood movies Skyfall, Maleficent and Guardians of the Galaxy.

“The computer model of the Stegosaurus plates is divided up into lots of tiny blocks, like Lego bricks all joined together. Using values from modern animal bones, we tell the computer how strong the blocks are. We can use that to calculate how much force it would take to bite through or snap the plate and test if the plates were strong enough to be used for defence,” says Barrett of the Natural History Museum. Stegosaurus’s eating habits are also still in question. Its teeth are very small – measuring only half a centimetre, smaller than our own teeth. They show no signs of wear, suggesting that they never met together to chew. So was Stegosaurus only capable of slurping decaying plant material? The preservation of this skull can finally help us reveal the type of material Stegosaurus was capable of eating. “Because the bones in our specimen’s skull are separated from each other, we can see how the skull fits together in 3D. We can then use this information to see how the skull would work as a chewing machine, how strong it was and therefore give us some clues on the types of plant material it could have chewed,” says Barrett.

Dr Charlotte Brassey from the Natural History Museum has painstakingly taken 20,000 photographs of the Stegosaurus’s bones and used them to produce a 3D model of the complete dinosaur. “With this model we can start to explore things like its weight, how its leg muscles moved and eventually reconstruct how it would have walked,” says Brassey. Previous estimates have suggested some stegosaurs tipped the balance at 3-6 tonnes, about the same size range as modern African elephants. In the absence of a whole skeleton, this estimate has been based on the size of its limbs, which for modern mammals is closely related to their weight. “Using the new Stegosaurus, a much better estimate can be found by calculating the volume of the beast by stretching a skin over the 3D model computer model of the bones. Different amounts of flesh can be added and the density of flesh changed and the likely weight of the animal calculated,” explains Maidment. Even when this Stegosaurus is made a little on the chubby side its weight is still more like that of an elephant seal rather than an African elephant.

As we continue to discover more and more well-preserved skeletons, there’s a chance we might have to rethink how we reconstruct dinosaur species, including their body size. Meaning my nephew’s toy box will need some updating…

Palaeontologists use Hollywood technology to reassess knowledge of Stegosaurus