Sony Pictures head rebukes Obama's criticism: 'We have not caved. We have not given in' 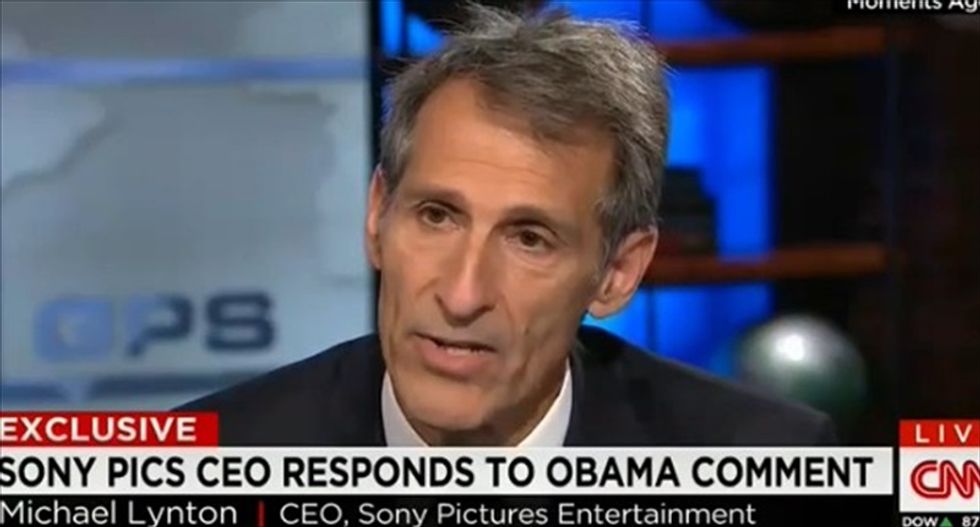 Sony Pictures CEO Michael Lynton accused President Barack Obama of not understanding his company's decision to cancel the release of the film The Interview and insisted to CNN on Friday he had not backed down to the hackers who attacked his company last month.

"We have not caved. We have not given in," Lynton told host Fareed Zakaria. "We have persevered and we have not backed down. We have always had every desire to have the American public see this movie."

Lynton's remarks came shortly after Obama said the company made a mistake by scuttling the film's planned Christmas Day release.

"The president and I haven't spoken," Lynton said. "I don't know exactly whether he understands the sequence of events that led up to the movie not being shown in the movie theaters. Therefore I would disagree with the notion that it was a mistake. It's a generally-held view by the public and the press [that] that's what happened, and maybe that's how that view was held by him."

The release was canceled after five movie theater chains announced that they would not show The Interview, following threats by the hacker group "Guardians of Peace," which claimed responsibility for the cyber-attack against Sony last month. The hack exposed both employees' personal data and several emails between company executives showing sexist and racist remarks.

U.S. officials said on Wednesday that they had found links between the group and the North Korean government. North Korean officials have continually denied any connection to the hackers.

"We experienced the worst cyber-attack in American history, and persevered for three-and-a-half weeks under enormous stress and enormous difficulty," Lynton told Zakaria. "All with the effort of trying to keep our business up and running and get this movie out to the public."

Zakaria's interview with Lynton is scheduled to air in full on Friday night at 8 p.m. EST. An excerpt posted by CNN can be seen below.