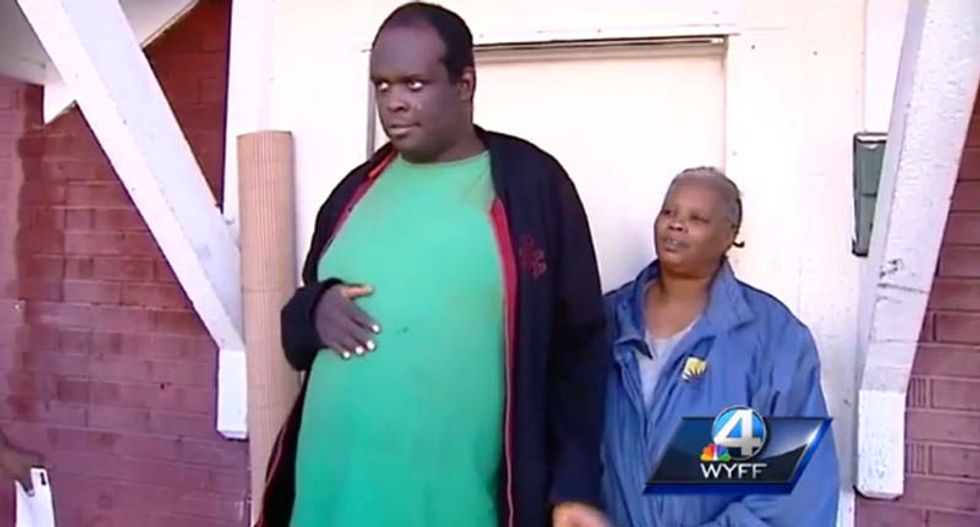 A South Carolina woman has filed a complaint with the Greenville City Police Department after officers Tasered and then arrested her autistic 34-year-old son on Christmas Eve after he attempted to avoid them, reports WYFF.

According to Carolyn Anderson, her son, Tario, has a severe form of autism rendering him almost incapable of speaking.

"Tario can say yes or no, he might ask for a thing or two, but just verbal, no," Carolyn Anderson explained.

Right before midnight on Christmas Eve, Greenville police responded to a call about gunshots in the neighborhood when they spotted and attempted to detain Tario as he walked on the street near his home. According to his mother, her son frequently goes for walks in the evening, visiting family members who live in the neighborhood.

Police say when they spotted him on the street he attempted to walk away from them.

"When they put their spotlight on him, he immediately put his head down, put his hands in his pockets and began to walk away from him," Officer Johnathan Bragg with Greenville Police said. "They then got out of the vehicle and approached him and ordered him to stop at which point he did flee from the officers and they pursued him."

After police caught up with Anderson they used Tasers on him in order to take him into custody.

Neighbors familiar with Tario -- who has lived his entire life in the same neighborhood-- heard him yelling as the police attempted to subdue him and they immediately called his mother.

"If you had seen my baby was out there, laying on that sidewalk and every time he reached for me, I reached for him- [they'd say] "Get back, we gonna Tase you"," Carolyn Anderson said. "I was trying to make them take me to jail. I curse everything, 'Take me! I'm the one causing trouble! Take me. He's not doing nothing.' No matter what I said, it didn’t make no difference to them."

According to Officer Bragg, officers were not aware of Anderson's disability, but that he still broke the law when he attempted to flee.

"From what he did, he did break the law so in any case like that, we do go ahead and arrest them and make the charges and we’re not deemed certified to declare anyone as mentally ill or with a disease or anything like that so we don’t technically know if he is," Bragg said.

Following his arrest, Anderson was treated on the scene by paramedics before being taken to a detention center where he was charged with interfering with police and resisting arrest.

Carolyn Anderson, who said her son has never been arrested before, was outraged.

"Interfering? Resisting? It's against the law to take off running? I still don’t understand. I really don’t," she said. "I say if you hear gunshots, are you going to stand there and wait to see if the bullet hit you or are you getting out the way?"

Bragg later released a statement saying that police are looking into the Anderson complaint, but added that "members of the public need to be cooperative with police when stopped."

Tario Anderson is expected back in court Jan. 9.

Watch the video below, uploaded to YouTube by WYFF: