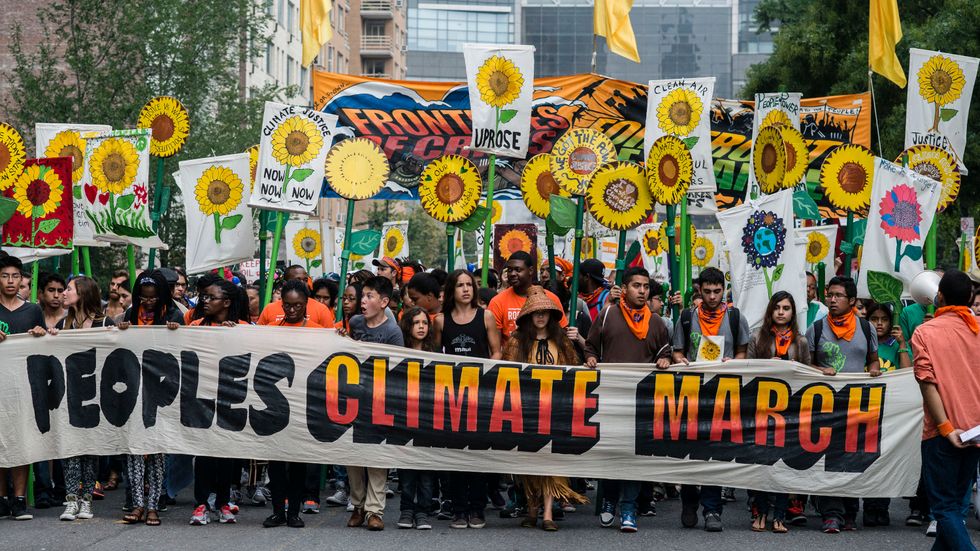 Negotiations on forging a UN pact to fight climate change headed into an unscheduled 13th day on Saturday in a frantic quest to bridge a rift between rich and poor countries.

Ministers and senior officials from 195 states were to examine a compromise for calming a bustup over who bears responsibility for fighting climate change.

The talks in Lima had been scheduled to end at 6:00 pm (2300 GMT) Friday, but ran into the pre-dawn as countries horse-traded over elements of a draft text.

Exhausted delegates were then given the chance of a few hours' sleep before a meeting at 1500 GMT Saturday to sound out opinion in a working group tasked with finalizing the big document.

On the table is a text for shaping a worldwide accord to roll back carbon pollution which is now on track to ravage Earth's climate system.

Theoretically sealed in Paris in December 2015 and taking effect by 2020, the deal would for the first time bring all members of the UN Framework Convention on Climate Change (UNFCCC) into a single arena for cutting greenhouse gases.

Its objective would be to ratchet down annual gas emissions so that global warming, driving climate shift, would never exceed two degrees Celsius (3.6 degrees Fahrenheit) over pre-industrial levels.

But the talks in the Peruvian capital to pave the way to this historic agreement have run into a familiar problem -- finger-pointing about which countries should do the heavy lifting.

The source of this lies in a principle of burden-sharing, enshrined in the UNFCCC's charter in 1992

The greatest friction has been over what to include in the core of the pact: national pledges for curbing Earth-warming fossil fuel emissions.

Developing nations insist Western economies bear the bigger burden because they were the first to use polluting fossil fuels to power their way to prosperity.

Industrialized countries retort that rich and poor countries are now at historical parity in their respective contributions to the carbon problem.

The big source of tomorrow will be developing giants like China and India, which are voraciously burning coal, the dirtiest fossil fuel, to power their rapid growth, they say.

Campaigners in Lima lashed the proposed compromise as wishy-washy.

If approved, it meant "almost no progress would be made at Lima and all the work punted down the road to be fought over next year in Paris."

"There would be essentially no outcome for people and the planet. It would be the weakest of weak political statements," said Asad Rehman of Friends of the Earth.

The draft compromise would gut demands -- contested by rich countries -- to spell out adaptation help or finance commitments in their pledges.

And it would strip out requirements, opposed by China, for the process to be closely reviewed to see if it is in line with the 2 C goal.

Instead, it mentions a "non-intrusive and facilitative dialogue, respectful of national sovereignty."

Poor countries and small island states at risk of sea-level rise are also concerned that the draft mentions no mechanism to help them foot the bill for damage induced by climate change.

Scientists say a temperature rise of 2 C would be roughly half of the warming that can be expected by 2100 on current emissions trends.

A 4 C world, they say, would be a grim place. It would be a planet gripped by drought, flood, storms and rising seas.

Emissions must be slashed by 40-70 percent by 2050 from 2010 levels and to near zero or below by 2100 for a good chance of reaching 2 C, the UN's Intergovernmental Panel on Climate Change said in a report issued this year.