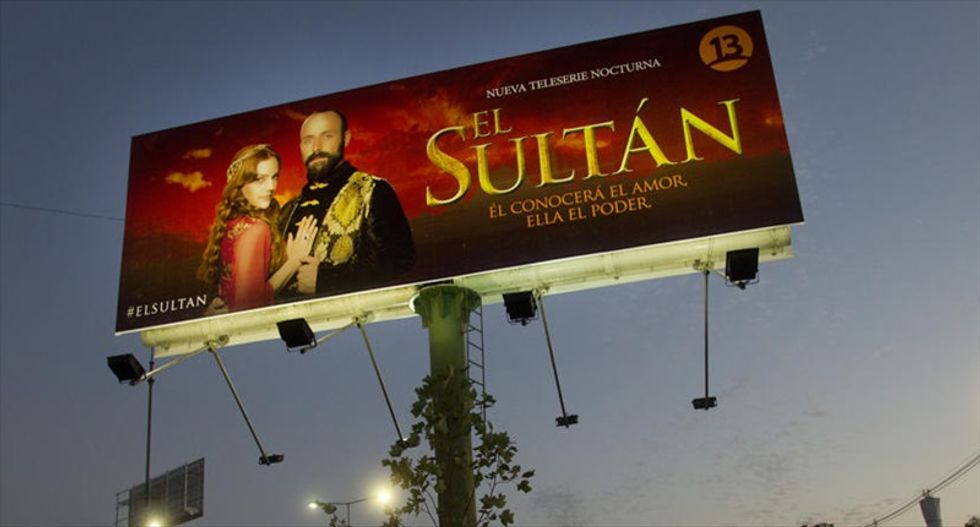 The tortured romance between Sehrazat and Onur, the central drama of Turkish soap opera Thousand and One Nights, is taking Chilean television by storm and reshaping prime time in Latin America, the land of the "telenovela."

In exchange for the money she desperately needs to treat her son's leukemia, Sehrazat, a widowed architect, reluctantly agrees to spend the night with Onur, her powerful boss, who falls hopelessly in love with her, setting off a torrid chain reaction that has captivated Chileans for months.

Dubbed in Spanish by Chilean actors, Thousand and One Nights has achieved an audience share not seen in years in the South American country, reversing the sinking fortunes of the channel airing it.

The phenomenon has caused TV executives across Latin America to start importing Turkish series to a region more used to exporting its own telenovelas -- prime-time soap operas such as Ugly Betty -- around the world.

Chilean channel Mega was a struggling network when it bought Thousand and One Nights after the program was turned down by Canal 13, one of the country's leading broadcasters.

The series began airing in March and soon became the most-viewed show of the year, pulling the rest of Mega's programming by its coattails.

The channel now has the top news show and morning program, as well, and is the only Chilean network on track to turn a profit in 2014.

That success has sent other Chilean broadcasters scrambling to buy their own Turkish series, including Canal 13.

Mega has meanwhile signed up two more Turkish shows, What is Fatmagul's Fault? and Ezel.

- Breaking into the Americas -

Sehrazat and Onur are now playing out their burning romance in Colombia and set to premier in Uruguay, Brazil, Ecuador and Peru.

The series has also been sold in Argentina and Bolivia.

That represents a coup for Turkish television, whose soaps have faithful audiences in dozens of countries across Europe and the Middle East but had never cracked the Americas.

"But we managed to enter the region this year. We were lucky to have a lot of success in Chile, and that opened up other markets," he told television industry website TodoTV News.

"Interest is growing and we're getting a lot of business proposals," he told AFP.

"Turkish soap operas are excellent from the point of view of the stories, narrative and artistic and technical elements," he said.

"The casting is very much in sync with our region and very attractive, with exotic exteriors that place a high value on production and extraordinary directing and camera work."

The Turkish soaps are classic melodramas with lots of romance and minimal sex.

"People like the old, traditional format, the classic script, the love triangle, where the baddies are really bad and the hero suffers throughout," said Francisco Cortes, head of telenovelas at Chilean broadcaster TVN.

Sociologist Manuela Gumucio, head of the Chilean media observatory, said the Turkish soaps "have a very traditional romantic element, which are ultimately these universal formats that never get old."

The Turkish invasion comes at a time when Latin America's own soaps have turned toward erotically charged dramas and "narco-telenovelas" that revolve around drug trafficking.

"Latin American series have drifted toward more violent plots with a more visible sexual element, abandoning their main audience: women over 45," he said.

In Chile, Mega's success has forced other networks to overhaul their own programming.

Last week Canal 13 premiered The Magnificent Century, a period drama starring Halit Ergenc, the actor who plays Onur in Thousand and One Nights -- now a celebrity in Chile.

Based on the life of 16th-century Ottoman sultan Suleiman the Magnificent, the series was a smash hit in Turkey, where fast food chain Burger King even launched an "Ottoman" hamburger topped with hummus.

"There's a seasonal effect in television. Whatever is successful sells," said Naranjo.

"And that creates a multiplier effect."