Two NYPD cops get killed and 'wartime' police blame the protesters. Have we learned nothing? 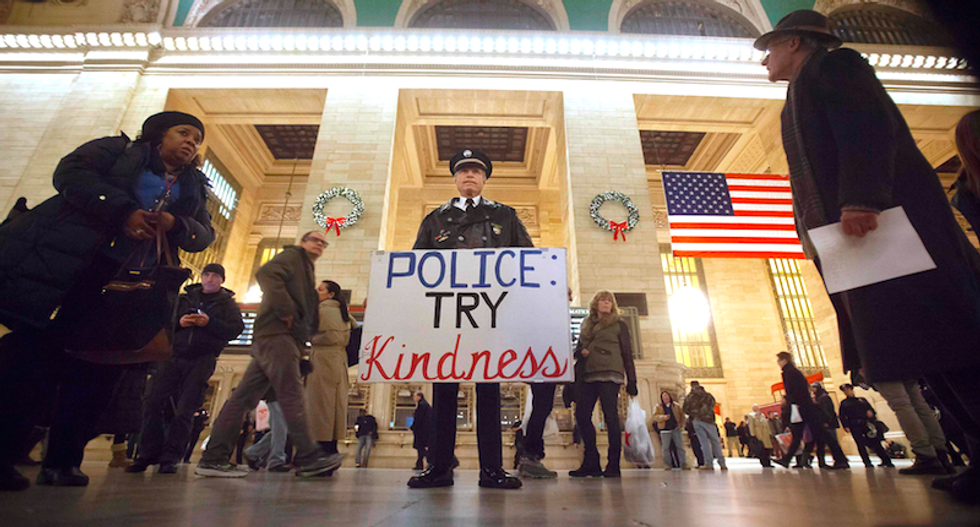 A protester stands with a sign as he joins a protest to demand justice for the death of Eric Garner, at Grand Central Terminal in the Manhattan borough of New York, December 9, 2014. (REUTERS/Carlo Allegri)

We’re better than this.

America’s nightmare of violence and racism got upended in New York City on Saturday with the shooting of a woman in Baltimore, the shooting of two cops in Brooklyn and the suicide of their suspected fleeing killer.

This time, the bloody violence was clear, and the social-media threat appears real , but the racial and power dynamics are as confusing as they are telling: A black man, Ismaiiyl Brinsley, apparently shot his ex-girlfriend (race unknown), then traveled to New York, where he “assassinated” an Asian officer and a Hispanic officer of the New York Police Department (NYPD), in their squad car. In between, an Instagram photo : a gun, revenge and references to the killings of Michael Brown and Eric Garner. You will believe what happened next – white head of the police union declares war on protesters within hours – but it shouldn’t have to be this way.

This kind of moment requires dynamic leadership, but beyond a brief statement , President Obama was no more going to re-route Air Force One from Honolulu to New York than he would ever direct it to Ferguson. And Mayor Bill de Blasio has such little credibility with his own force that cops turned their back on him when he arrived at the hospital where officers Wenjian Liu and Rafael Ramos were declared dead.

One person offering clear directives to the cops: Patrick Lynch, their union president, who asked them to sign an emotionally manipulative letter banning de Blasio from their hypothetical future funeral , and who actually said on Saturday night that there was “blood on their hands [of] those that incited violence on the street under the guise of protest … [blood] on the steps of city hall, in the office of the mayor” .

Yes, the cops blamed the protesters. ( So did Rudy Giuliani , but don’t get me started on him.) Even more chilling, the police union declared that the NYPD has “become a ‘wartime’ police department. We will act accordingly.”

Wartime? These are the marching orders to the 35,000 armed members of the biggest police department in the United States. This is the message now sent to protesters around the nation who have been finding novel and peaceful forms of expression to resist oppression – who have been protesting in reaction to police violence, not causing it.

For the state and its agents, “the ultimate expression of sovereignty resides, to a large degree, in the power and the capacity to dictate who may live and who must die,” the postcolonial scholar Achilles Mbembe wrote of his term necropolitics, which describe who, exactly, wields the power to kill. The fear inside that police union boss is not just about the actual violence which may befall his members; it’s a fear that the NYPD is in danger of losing its monopoly on the threat of violence. To Patrick Lynch (and to all of us), a cop’s killing is unacceptable. But to Patrick Lynch (and to too many white people), a cop acting as judge, jury and executioner is somehow acceptable.

Now the necropolitics have flipped, and the armed cops are in a position where they feel as vulnerable as the unarmed folks saying, “Hands up, don’t shoot.” And trust me: that’s when things get ugly. On Friday night, I went to a rally in support of the NYPD , which has been under increased pressure since a grand jury’s decision not to indict in the killing of the unarmed black father Eric Garner in a chokehold. You had almost all white pro-police supporters on one side, and non-white police critics on the other. The non-white people would chant, “Hand up, don’t shoot” – and the white people would respond, “Hands up, don’t loot.” Many of the white protesters invoked 9/11, and they sung “God Bless America” … and they wore t-shirts that read I CAN BREATHE.

Six years ago, I went for a run in New York City. I’d left my watch and phone at home, so when I saw two NYPD cops on a corner, I stopped and said, “Excuse me, officers, can you tell me the time?”

One officer reached for his gun, pulled it out of his holster, and – when he saw the terror in my eyes – started laughing.

“Just kidding,” the white cop said as he put away his gun. “Gotcha!”

He didn’t kill me, obviously. But I was going to die. What little faith I had in the most powerful police force in America died in that moment, too. I felt “social death” in the humiliation and shame of being too frightened to go back and get his badge number. I felt powerless when I tried to report the cop’s threat to a civilian accountability board and was told there was nothing they could do.

A cop pointing a gun at me as a “joke” and a cop getting a bullet in his head are no parallel, to be sure, but no one – cops included – should have to live even under the threat of violence, which is a form of violence itself.

So we must not let these brutal cop killings stop an honest movement built on affirming justice and peace.

We must not allow more police departments to adopt a ‘wartime’ mentality, just when we thought we were getting somewhere after the War on Terror military reenactments in Ferguson this summer.

We must not let protesters become labeled “domestic enemy combatants”, we must allow episodes where the script gets flipped to become an excuse to surveil black man even more .

And we must not give in to our most base anxieties, especially by indulging the fears of those who have guns and who are still, even after everything this year, expected to “serve and protect” us.

All of this violence is connected. We owe it to those taken from us too early – from the woman in Baltimore, to young black men in Ferguson and Ohio and beyond, and certainly to those two NYPD cops in their squad car in Brooklyn and their families – to break the American cycle of violence, even when it starts spinning in reverse.