Underdressed Sarah Palin shares tips for keeping ‘Christ in Christmas,’ which include buying her book 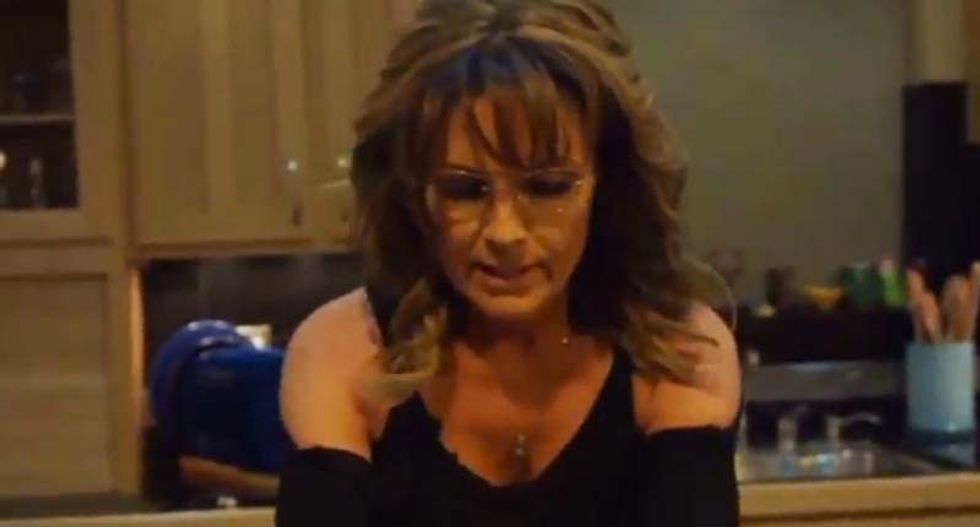 On a recent episode on the Sarah Palin Channel, the former vice presidential candidate spoke of keeping the true spirit of "Christ in Christmas," while promoting her year-old book, 'Good Tidings and Great Joy: Protecting the Heart of Christmas.'

Former half-term Alaskan Governor Sarah Palin, spoke of recipes and family holiday get-togethers while noting that her viewers shouldn't let "a few angry atheists with attorneys" get in the way of celebrating the birth of Christ.

She continued to discuss "what we believe in at this time of year," before returning, once again, to her book.

"What we believe in is freedom of expressing our faith and what our beliefs are, not allowing just a few angry atheists with attorneys perhaps to tell us that we can’t celebrate the birth of Christ the way that we would like to," she said. "And it’s not an in-your-face political lecture, it’s a fun book that incorporates the solution to the challenge that is the war on Christmas that we see taking place right now."

Palin went on to say that she believes the book will "hopefully will spark some inspiration in other people to allow them, no matter what faith anyone is, allow them some Christmas joy to spread."

She also promises that the book features her recipe for her moose chili ("I'm kind famous for my moose chili") as well as rice krispie treats and blue-berry pies, saying her family has to "compete" with native Alaskan bears to harvest the berries first.

Palin does not give any tips where to find her book, however used hardbound editions are available on Amazon.com for one penny, plus shipping.

Reviews at for the year-old book at Amazon seem to be mixed, with one reviewer saying, "I have all of Sarah Palin's books. I enjoyed reading this and keep it out for my friends and family to read."

Another reviewer  was not so charitable, writing: "this book is little more than a revelation of Palin’s astounding ignorance of how real-life atheists and liberal-leaning folks, many of whom she may be shocked to learn are also Christians, actually think and behave. Instead of exhibiting even a hint of recognition that well-meaning Americans may hold different beliefs, she sets forth a vision of an America swarming with amoral, God-hating, nation-destroying liberal boogeymen who are hell-bent on destroying everything she holds sacred. I find it mind boggling and more than a little disturbing that this woman was considered by some to be a serious candidate for national political office."

Watch the video below, uploaded to YouTube by Dan Weber from Wonkette: