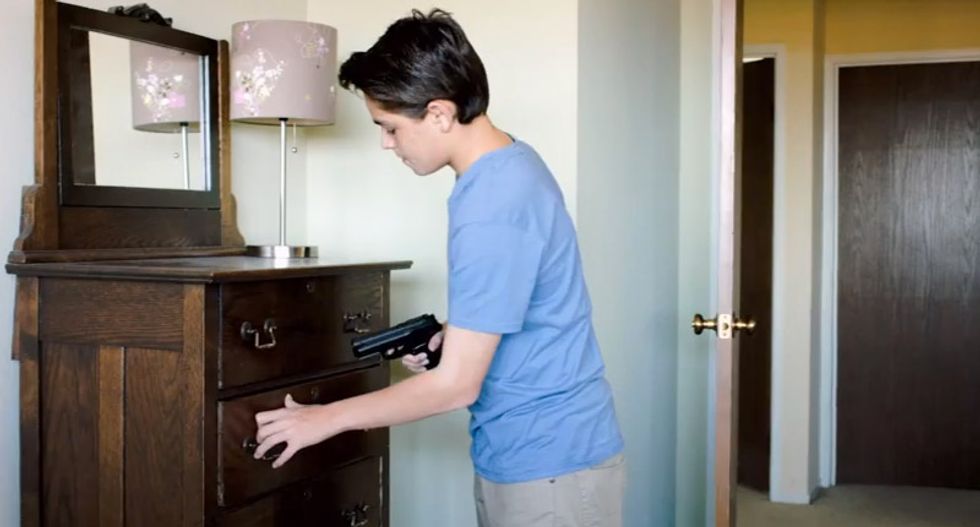 A San Francisco filmmaker has created a controversial gun control video showing a young man stealing his mother's gun, taking it to school and handing it over to a teacher saying, "I don't feel safe with a gun in my house."

The video, created by Rejina Sincic and done in the style of a public service announcement, shows the boy checking on his mother -- seen reading a book -- before she slips up the stairs. Entering her bedroom, he opens a dresser drawer and takes out a handgun, returning to his room where he is seen putting it in a backpack.

In the next scene he is seen walking though the halls of a school carrying the backpack before settling into his seat in a classroom As the class ends and after the other students leave the room, he approaches the teacher, pulls out the gun and lays it on her desk, startling her, before saying, "Can you take this away? I don't feel safe with a gun in my house."

The video ends with the tagline: "Stop gun violence now."

Not addressed in the video is the danger of children handling possibly loaded guns, carrying them in their backpacks, and taking them onto school property, which is highly illegal. The video also comes on the heels of the death of 12-year-old Tamir Rice who was shot by  a police officer while holding a pellet gun which police took to be a real gun.

At the Washington Post, law professor Eugene Volokh notes multiple laws that the boy is breaking, while also addressing the legal culpability of the filmmaker should a child decide to emulate the actions of the boy in the video.

"I can imagine some impressionable teenager seeing what the appealing protagonist is doing, and trying to copy it, especially since the serious tone of the video seems to invite its being taken seriously, he wrote. "And the results could include expulsion, criminal prosecution, or even death."

Critics of the video have contacted Sincic through her Twitter account, pointing out how dangerous it would be if children followed through, with other critics calling her a "gun grabber." Sincic has retweeted many of their comments but has not responded to the criticism, only tweeting a link to the video and encouraging people to watch and share, writing, "Lot of people are afraid to share my PSA! If you are not a coward please share #gunsense."

Watch the video uploaded to YouTube by Rejina Sincic :