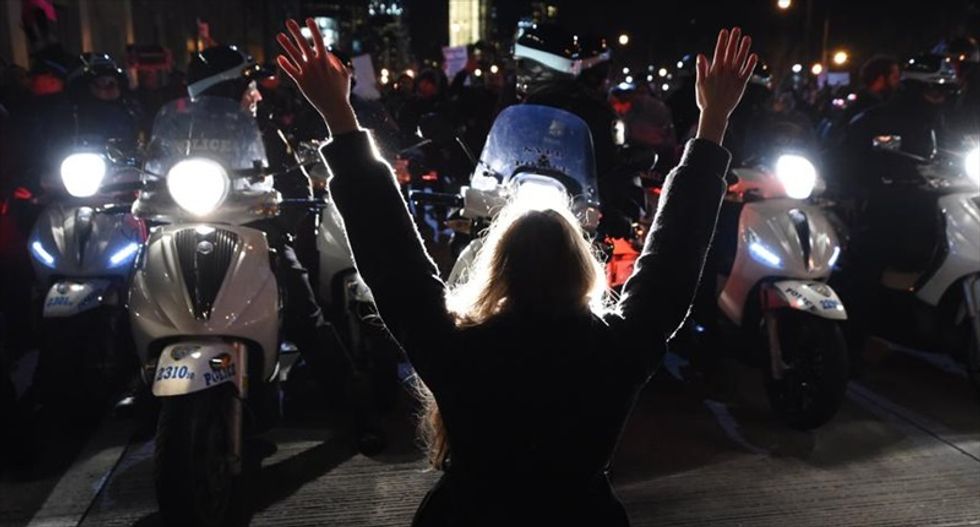 A protestors hold up her hands in front of the NYPD as she and others block traffic on the West Side Highway during demonstrations on Dec. 4, 2014 in New York City against the chokehold death of an unarmed black man by a white police officer. (Timothy A. Clary/AFP)

A national coalition of activists Tuesday rejected calls to suspend anti-police protests in New York after two officers were murdered, and called for a mass demonstration on New Year's Eve.

America's largest city has been left in shock by the killings of Wenjian Liu, 32, and Rafael Ramos, 40, shot in the head as they sat in their patrol car in broad daylight in Brooklyn on Saturday.

Cities across the United States have seen weeks of protests over the killings and decisions not to prosecute white officers responsible for recent deaths in New York and Ferguson, Missouri.

But on Tuesday dozens of protesters defied a call from mayor Bill de Blasio urging New Yorkers to suspend demonstrations until after Ramos and Liu are buried in a bid to defuse tensions.

"It's not as a disrespect to any life," said Sumumba Sobukwe of the group, Occupy Wall Street, which is supporting the protest.

"But it's also to say we've had countless people killed by the police, and there's been no calls for a suspension on that," he told reporters earlier on Tuesday.

"These actions are being used as a pretext to attack our movement and constitutional right to free speech and assembly," he said.

While Ramos's funeral will take place on Saturday, no date has yet been announced for Liu's with relatives due to arrive from China.

De Blasio announced that some of the most iconic buildings in New York would dim their lights in honor of the two officers at 9pm (0200 GMT Friday) and he renewed calls for unity.

"Right now, I want everyone to focus on these families, on their pain. Put yourselves in their shoes. Be there for them and be there for the extended family of the NYPD," he said prior to observing a moment of silence.

The Stop Mass Incarceration Network on Tuesday braved rain outside City Hall -- where the US and New York flags stood at half mast to mourn the slain officers -- to also defy the mayor's calls.

"They have no right to tell us that we should back off our protests and we should silence our voices. Our voices must be heard," network co-founder Carl Dix told reporters.

"Our stance should be as long as these murders by police happen, as long as the criminal justice system refuses to indict and convict any of these killer cops, then our resistance must go on."

The group called for a protest march on New York's iconic Times Square, where thousands traditionally celebrate New Year's Eve on a live televised program watched by millions around the world.

"We're here today to call on people to rock in the New Year with resistance to police murder. No New Year under this old system," said activist Travis Morales, urging protesters to take to the streets on December 31.

The protesters condemned a prosecutor's decision in Milwaukee on Monday not to charge a white officer who shot dead a black man he was trying to search in April. The officer has already been fired.

Recent protests have focused on decisions by grand juries not to prosecute the white officers who shot dead 18-year-old Michael Brown in Ferguson, Missouri in August and used a fatal chokehold on father-of-six Eric Garner in New York in July.

De Blasio, who has biracial children, came under a stream of criticism after telling reporters that he had counseled his teenage son Dante to take extra care when dealing with officers.

Watch a livestream from a protest in the city, as posted online on Tuesday, below.