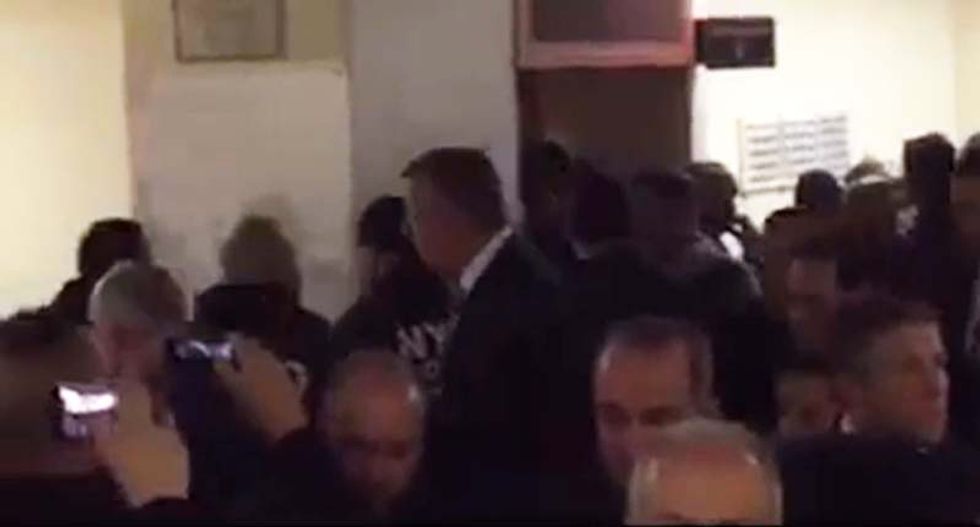 New York City police officers, already at war with recently elected Mayor Bill de Blasio, turned their backs on the mayor as he entered the police press conference to address the shooting deaths of two officers in Brooklyn, PIX 11 reports.

Two officers were killed "execution style" as they sat in their squad car in a Bedford–Stuyvesant neighborhood Saturday afternoon.

According to Police Commissioner William Bratton, the shooter, identified as Ismaaiyl Brinsley, 28, took a shooter’s stance on the passenger side of the squad car and opened fire on the two officers with a silver semi-automatic handgun.

Invited to attend the press conference to discuss the shooting, Mayor de Blasio was greeted by hallways filled with police officers who turned their backs on the mayor as he and his entourage made their way to the press room.

New York police officers have been in conflict with the mayor following the choking death of Eric Garner.

“This is now a national moment of grief,” he said. “A national moment of pain. We are dealing with centuries of racism that have brought us to this day.” de Blasio vowed to push forward, reforming the  New York City police department and cracking  down on officers “who don’t live up to the values of the uniform.”

The mayor also called for peaceful, non-violent protests in the wake of the deaths.

Angered by de Blasio's comments, New York City's police union launched a campaign to keep the mayor away from funerals of any officers who might die in the line of duty.

On Twitter, de Blasio was criticized by NYPD's Sergeants Benevolent Association (SBA) which tweeted: "The blood of 2 executed police officers is on the hands of Mayor de Blasio. May God bless their families and may they rest in peace."

de Blasio was also criticized by former New York Governor George Pataki, who tweeted: "Sickened by these barbaric acts, which sadly are a predictable outcome of divisive anti-cop rhetoric of #ericholder & #mayordeblasio. #NYPD"

See the tweets and video below: