Yes, Barbie is unrealistic -- but don't blame the doll for women's body dissatisfaction 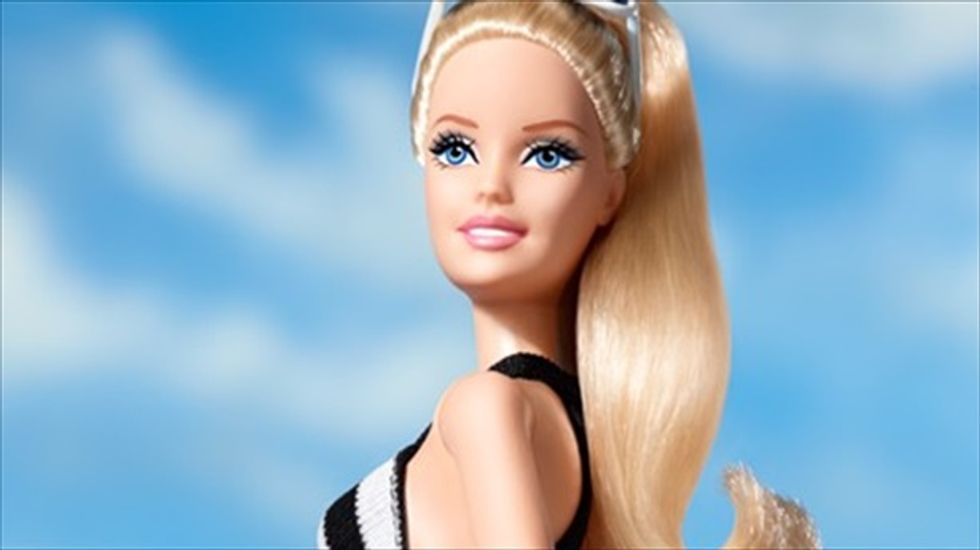 Launched in 1959, named after the inventor’s daughter Barbara, and owned by 99% of 3-10 year old girls in the USA, Barbie has been a popular request on young girls’ Christmas wish lists for 55 years.

So, should we buy them? What are these toys teaching our young girls? Barbie has been blamed for causing body image issues and even eating disorders. She has even been said to be perpetuating gender stereotypes that lead to domestic violence and the gender pay gap. But are they really all that bad?

There is no need to question whether Barbie’s body shape is unrealistic. Researchers have reminded us that her proportions would occur in less than 1 in 100,000 adult women, that her waist is 20cm smaller than a reference group of anorexic patients; and that, with these proportions, she would not be able to menstruate or even hold up her head.

The doll’s creator, Mattel, claims that the proportions were created for ease of dressing and undressing the doll, not replicating an adult figure. However, there is no such rationale for the very thin representation of Barbie in her TV show, movies, books, and range of online games. In all forms, Barbie represents a completely unattainable figure for adult women.

Almost 40% of children are thought to be dissatisfied with the way they look, and girls as young as five report weight concerns and express a desire to be thinner. Body image has consistently appeared in the top three issues of concern in the Mission Australia Survey of Young Australians from 2006 to 2013.

Body image is a complex psychological construct, and we are yet to fully understand how body image, or body dissatisfaction develops in very young children. We do know that children learn by observing, absorbing, and imitating the things that they see around them, and that their early ideas about weight and appearance are shaped by their family, their peers and the media.

Children’s media is known to perpetuate stereotypical messages about weight, beauty, and appearance; the “good” characters are beautiful, and the “bad” ones are ugly, heavier characters have few friends, and are less happy than the thinner ones.

Research with 3-5 year olds indicates that they already clearly associate larger figure sizes with more negative characteristics, such as being naughty and mean. This also has the effect of reinforcing the societal “thin-ideal” for women, and having high levels of thin-ideal internalisation is a known risk factor for body dissatisfaction and eating disorders.

What does the research say?

The girls who viewed the images of Barbie had significantly lower scores on the Body Esteem scale after being exposed to the images, and indicated a preference for a thinner current body, and a thinner adult body. Subsequent research that has asked young girls to actually play with Barbie dolls, or control toys, found no immediate negative impact of Barbie on body image.

But what about the long-term effects? Retrospective studies that ask adult women to report their childhood Barbie habits and their current body image and eating behaviours have found that those who reported liking playing with their Barbies more than others had a higher conformity to feminine norms in adulthood - in particular a higher focus on appearance. However, there was no link between playing with Barbie as a child, and adult levels of body dissatisfaction or disordered eating behaviours, leaving the researchers to conclude that Barbie is “maligned but benign”.

So what does all of this mean for those of us buying presents for young girls this Christmas? Research in the UK in 2007 reported that young girls were more vulnerable to toy advertising, and were more likely to make requests to Santa for branded toys (Bratz and Barbie topped the list) that had been advertised in the six weeks prior to Christmas.

Time to get real

The realistically proportioned Lammily doll has been released just in time for Christmas this year. Developed by Artist Nickolay Lamm, Lammily features include a body size and shape that represents the average 19 year old American woman, natural make-up, and sticker packs to add acne, stretch marks and cellulite. She stands on flat feet, has a more casual wardrobe, and in every sense, is pretty much the “anti-Barbie”.

Buying girls the latest Barbie doll isn’t necessarily going to do them any harm, but we do need to be aware of the amount of appearance-focused media that young girls are exposed to. Young girls are constantly taking in messages about how they “should” look, and what appearance means. We can’t protect young people from all of this, but we can teach them how to critique it.