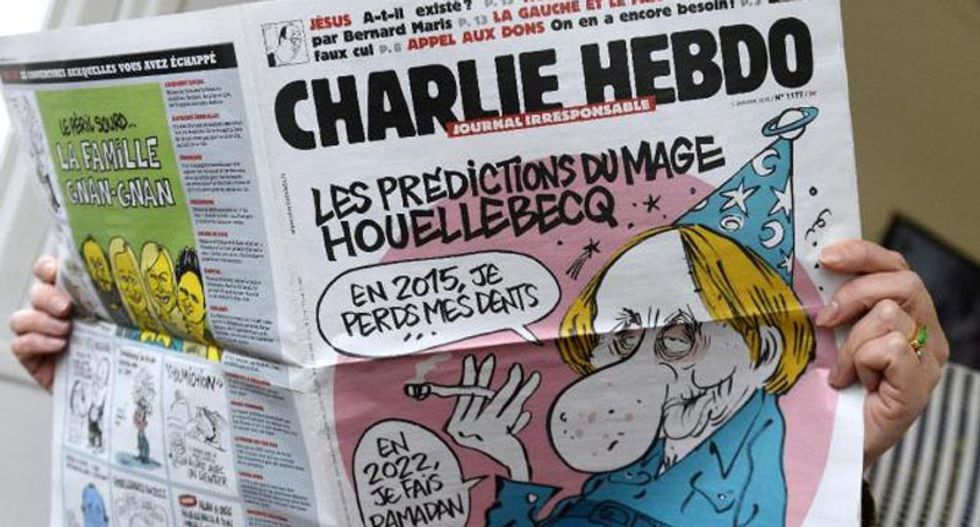 A new app for French satirical magazine Charlie Hebdo has been released for iOS, Android and Windows devices, letting readers worldwide get hold of a copy without queueing at newsagents.

The app is illustrated with the current cover, a cartoon of the prophet Muhammed, in a change from the norm for Apple’s notoriously censorious App Store which has previous banned satirical and controversial apps.

The launch of the app on Apple’s store comes after the firm put a Je Suis Charlie banner on its French homepage, a rare move for a company with a typically conservative web presence.

Shortly after the banner appeared, Apple reportedly fast-tracked an app called Je Suis Charlie through its approval process. The app let users find vigils for the magazine’s murdered staff happening near them, and show their support using social media.

Currently, only the most recent issue of the magazine is available, in both English and French editions. But the app also offers annual subscriptions starting at £69.99, alongside the individual issues for £2.29.

User reviews for the app have been overwhelmingly positive, with the majority of negative comments coming from users who couldn’t find the English translation. One one-star review does, however, brand the app “bad”, saying it is “based on racism and anti-muslim”.

Apple’s relationship with satire has not always been so rosy. In 2010, the company banned apps from string of prominent editorial cartoonists for breaching a policy against “ridiculing public figures”. Mark Fiore (a pulitzer prize-winning editorial cartoonist), Tom Richmond and Daryl Cagle all saw their apps denied approval for sale .

The first two were eventually allowed on after public outcry, but the latter’s app was never granted permission. In September that year, the company updated its guidelines to make explicit that “professional political satirists and humorists are exempt from the ban on offensive or mean-spirited commentary”.

Under other rules, however, the company continues to prevent edgy content from being sold on its storefront. Most recently, the game Papers Please, which mimics the experience of being a border guard in an authoritarian regime, was forced to remove nudity from a scene involving body scanners before the company would allow it on the App Store.

Apple has also censored publications sold through in-app purchases, perhaps the closest direct analogue to Charlie Hebdo. In November 2013, it rejected two issues of the comic Sex Criminals , and retroactively removed another, over the book’s explicit content (the award-winning comic features two lovers who discover that time stops when they have sex; they use that ability to rob banks).

Apple was unable to respond to requests for comment at press time.