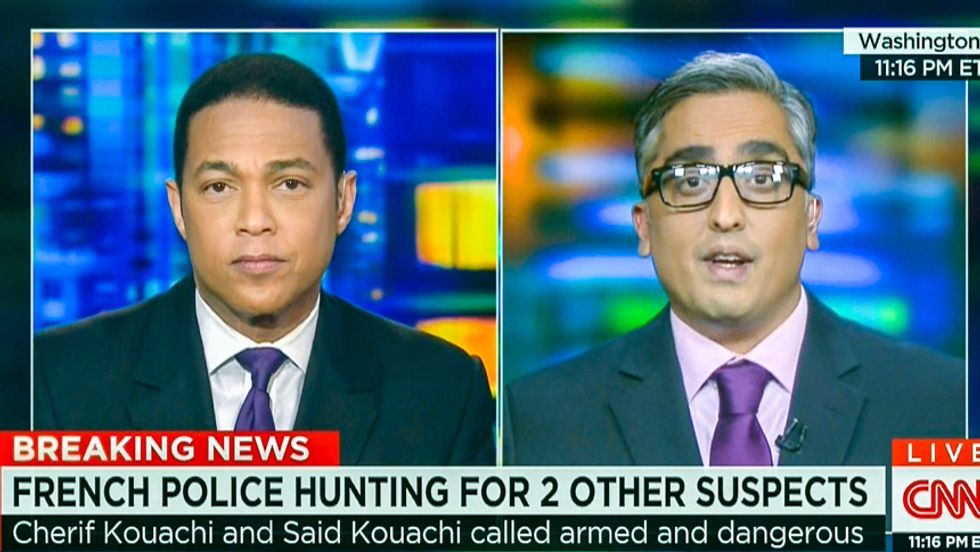 During coverage of terrorists attacks on the satirical newspaper Charlie Hebdo in Paris, Lemon interviewed human rights lawyer Arsalan Iftikhar, founder of The Muslim Guy website, about whether radical Islam was to blame.

Iftikhar reacted to the attacks in Paris by calling them a "crime against humanity," and added that he did not have a problem with the satirical depictions of the Prophet Muhammad that had been published by Charlie Hebdo.

"If you survey the vast majority of Muslims around the world, they would certainly say that the killing of innocent civilians is not only murder, but it's also against any normative mainstream teaching of Islam," Iftikhar explained. "Their acts are about as Muslim as abortion clinic bombers' or gay night club bombers' acts are Christian."

"What you're saying though, that's not always a reality of what people think about Islam," Lemon noted.

"It's important not to conflate the actions of a very few to a population of 1.7 billion people, which represents 20 percent of the world's population," Iftikhar pointed out. "You know, if people want to blame Islam for things, you know, they can blame us for inventing algebra or modern medical anesthesia or having five out of the last 12 Nobel Peace Prize winners."

"When Christians commit acts of terror, we don't asks priests and pastors to go on national television to condemn these acts, but sadly Muslim public intellectuals, thinkers, leaders, and Islamic scholars have that double standard that we have to deal with," he added. "I think it's important to keep in mind that bringing religion into it at all is actually serving the purposes of the terrorists."

Citing an August 2014 Newsweek poll which found that 16 percent of all French citizen supported ISIS, Lemon asked Iftikhar if all of those people were "Islamic extremists."

But Iftikhar said that it was wrong to jump to the conclusion that all French citizens who had said they supported ISIS in August of last year would back the killing of innocent civilians.

"Again in August, 16 percent of French citizens support ISIS," Lemon pressed. "Would you describe those who support ISIS as Islamic extremists? Do you support ISIS?"

"Wait," he replied. "Did you just ask me if I support ISIS? I just answered your question. I said that obviously these 16 percent of people support the ideology, but again, I don't think that would necessarily extrapolate to supporting of killing of innocent people."

Last year, Columbia Journalism Review named Lemon as one of the worst journalists of 2014 for asking questions that were not chosen wisely, such as wondering if Malaysia Airlines Flight 370 had been swallowed by a black hole. He also told a rape victim that there were "ways not to perform oral sex if you didn’t want to do it," and he reported that protesters in Ferguson, Missouri "obviously" smelled like marijuana.