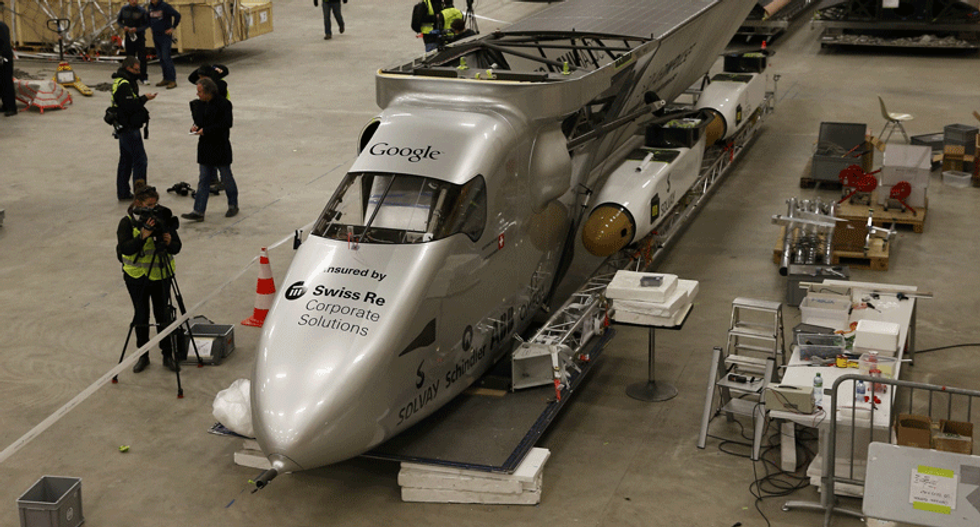 The dismantled Solar Impulse 2 aircraft is pictured before being loaded into a Cargolux Boeing 747 cargo aircraft at Payerne airport January 5, 2015. (REUTERS/Denis Balibouse)

A plane powered by the sun will attempt an unprecedented flight around the world next month, the project's founders said, seeking to prove that flying is possible without using fossil fuel.

Solar Impulse 2 is set to take off from Abu Dhabi with stopovers in India, Myanmar and China before crossing the Pacific Ocean and flying across the United States and southern Europe to arrive back in Abu Dhabi.

On its five-month journey of 35,000 km (22,000 miles), the engines will be powered only by solar energy. The two Swiss pilots will take turns at the controls in the tiny cabin for five consecutive days and nights in the air.

"Miracles can be achieved with renewables such as solar power. We want to show we can fly day and night in an aircraft without a drop of fuel," Bertrand Piccard, one of the pilots and the project's co-founder, told reporters on the sidelines of the World Future Energy summit currently underway in Abu Dhabi, capital of the United Arab Emirates.

The plane, which has the weight of a family car (2,300 kg, 5,100 pounds) and a wingspan equal to that of the largest passenger airliners, will take off in late February and return by late July. Its journey will span approximately 25 flight days at speeds between 50 and 100 km (30 to 60 miles) per hour.

"It is not the first solar airplane, however it is the first able to cross oceans and continents," he said.

Piccard said of the challenge: "It is simply the unknown. It is a question of technical reliability, of human weather and it is the challenge of discovery."

If something goes wrong, they will build another aircraft and continue the journey, he said.

"There's a will in humankind to make a better world and find solutions to climate change."