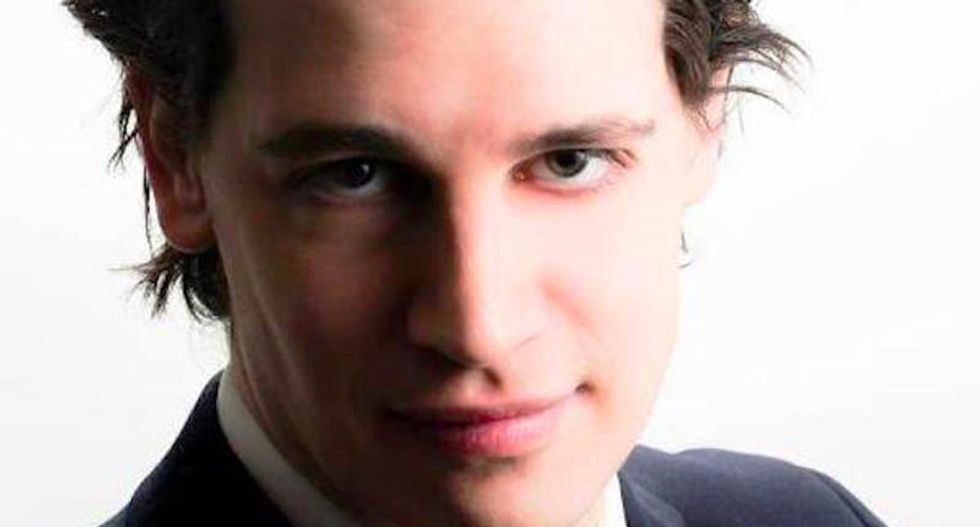 Before we get to the literary crimes against free verse poetry perpetrated by Breitbart "journalist" Milo Yiannopoulos, a little background seems to be in order.

Seriously? You don't know what Gamergate is? Okay. Simply explained, the boyfriend of a game developer accused her of cheating on him with a game reviewer in an effort to get an extra "joystick up," or however they rate games. Jilted boyfriend then wrote a blogpost about his wounded heart.  Gamers -- tired of the vicarious thrill of beating up a hooker with a baseball bat in Grand Theft Auto -- created a real-life game of threatening to rape and murder the female game developer for dissing their bro by being a ho, and then their rape fantasies escaped the borders of a single obsession and they started going after other women in the gaming community.

I thought Gamergate was about "ethics in gaming journalism"?

There are many instances of dicey journalistic ethics. Howard Kurtz giving airtime to clients of his wife. An agenda-driven Laura Logan spending a year on a 60 Minutes story that was revealed to be bullshit just over sixty minutes after it was broadcast. Judith Miller helping Dick Cheney start a war that took the lives of over 500,000 people. But if you can't trust a game reviewer to honestly assess the pros and cons of Assassin's Creed Unity because he might have been compromised by a handjob... well, who or what can you believe?  Life is then revealed as a bunch of bullshit and pain and sorrow and hypocrisy ... so why go on living?

Are all Gamergaters closeted rapey sociopaths?

Of course not. First of all, anyone can be a Gamergater, you just have to say that you are.

For example: "I am a Gamergater."

There. I said it on the Internet, so I am officially a pixel-verified member of Gamergate.

Now: "I am going to the house of [ name of female game developer or critic] and rape her, cut off her head, feed it to her dog, kill the dog, burn her house down and then go home and play Madden NFL 15."

Do Gamergaters ever grow out of this?

Sure, they eventually become men's rights activists and whine about circumcision.

It's kind of complicated....

So who is Milo Yiannopoulos and why should I give a shit about him?

Milo Yiannopoulos writes for Breitbart.com -- adjust your expectations accordingly -- and he has fashioned himself into Gamergate's bestest friend ever by way of rank opportunism coupled with his hatred of feminists, as Zaid Jilani explains here. Using Gamegate as a platform to jump-start a moribund career, Yiannopoulos even landed himself a shot on NPR where he explained that, although he doesn't approve of the rape and death threats and the doxxing, in the cold light of day: the 'bitches had it coming.'

Yiannopoulos is even writing a book about it:

Yes it does and it will be. And not just because Yiannopoulos is an opportunistic hack defending a misogynistic group of assholes with poor social skills. As Chris Kluwe, former NFL player and Gamergate bête noire points out, Yiannopoulos is a terrible prose stylist.

It seems that Yiannopoulos wrote a book of poetry years ago, published by Donkey Punch Press --make of that what you will -- and the unburdening of his poet's soul  was....

Here is an example (and I am not making this up):

He told me to pray

That God would forgive

But would God forgive him

For what he did

Enraptured and intrigued yet?

(We have been warned)

Verily, in truth, thus he spake

And then he sat down

And up amongst them

By far the wisest of the bird prophets

We must take care

Not to upset this baby cart

There are new ones now

My father, the many other

Azazel despairs in the night

And we will never

There is much more of this to be found here on Storify and we could leave it at that, but I would be remiss in not noting that @srhbutts on Twitter pointed out that Yiannopoulos makes liberal use of the lyrics of fellow tortured artist Tori Amos to express himself in all of his angsty darkness.

Because, to hate a feminist, you have steal the words of a feminist.

Or, as the Icicle Works once put it: "If you want to defeat your enemy, sing his song" ...or at least plagiarize the shit out of it to write truly awful poetry.