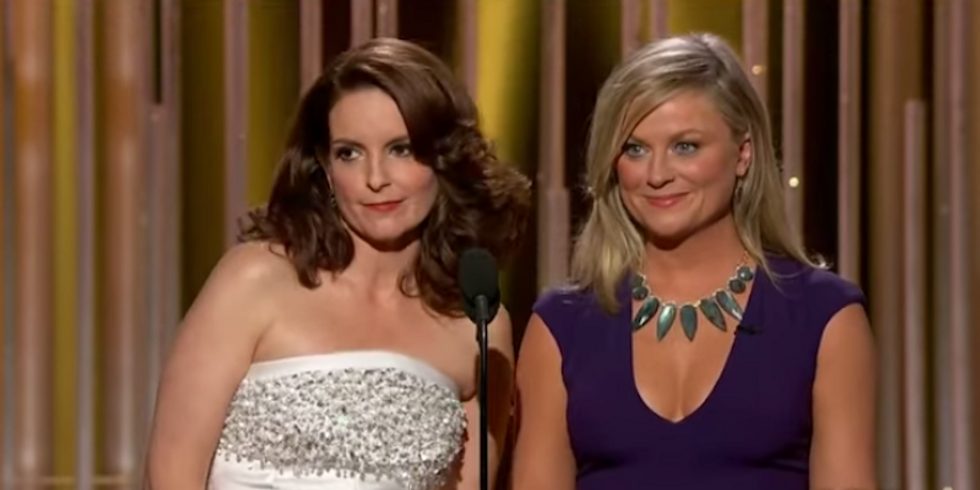 Sunday night's Golden Globes awards were truly epic. Hosting the awards ceremony for the third and last time, Tina Fey and Amy Poehler were amazeballs, went out with a bang, will be missed and should basically host every event ever. There were, of course, examples of douche-baggery (you know who I'm talking to... Jeremy Renner and Bill Bob). But the night was also marked by ground breaking nominations and wins, which honored people, ideas and populations who are all to often ignored, marginalized, invisible. In other words, nominations and wins which would make especially self-pitying straight, white, male conservatives who freak out about their alleged loss of power, extremely uncomfortable, angry, sad, and even more self-pitying. So, here, without any further ado, I present the moments from the 2015 Golden Globes that made conservative heads explode. (OK. A little bit more ado...  Because I don't actually have the footage of exploding heads, to illustrate the reactions as I imagine them, I turn to GIFs of some of the characters from The Office.)

2. Women get to make rape jokes!

If you need proof that reverse racism exists, just look at the way white people are not "allowed" to use "the N word." Not only is this a major restriction on freedom, but it's illogical because Black people are allowed to use the word. Well, here's the proof of reverse sexism: men aren't allowed to make rape jokes. Well, neither of these things is true, but explaining the relationship between history and language takes forever. Suffice it to say that many feminists agree that the issue with the rape joke isn't just the gender of the person telling it but the nature of the punchline. See, for example, how this joke about Bill Cosby mocks the rapist and not the person raped:

Tina: “In ‘Into the Woods,’ Cinderella runs from her prince, Rapunzel is thrown from a tower for her prince, and Sleeping Beauty just thought she was getting coffee with Bill Cosby. Actually, I don’t know if I — I don’t know if you guys saw this on the news today, but Bill Cosby has finally spoken about the allegations against him. Cosby admitted to a reporter, ‘I put the pills in the people. The people did not want the pills in them.’” Amy: “No, Tina, that — hey. That’s not right. That’s not right. It’s more like, ‘I got my pills in my bath robe and I put them in the people.’” Tina: “You’re right. Y0u’re right, It’s got to be like ‘I put the people in the hoagie.’” Amy: “That’s it, that’s it. That’s fair.” Tina: “That seems fair.”

3. Jeremy Renner makes a sexist joke and it's neither funny nor clever. 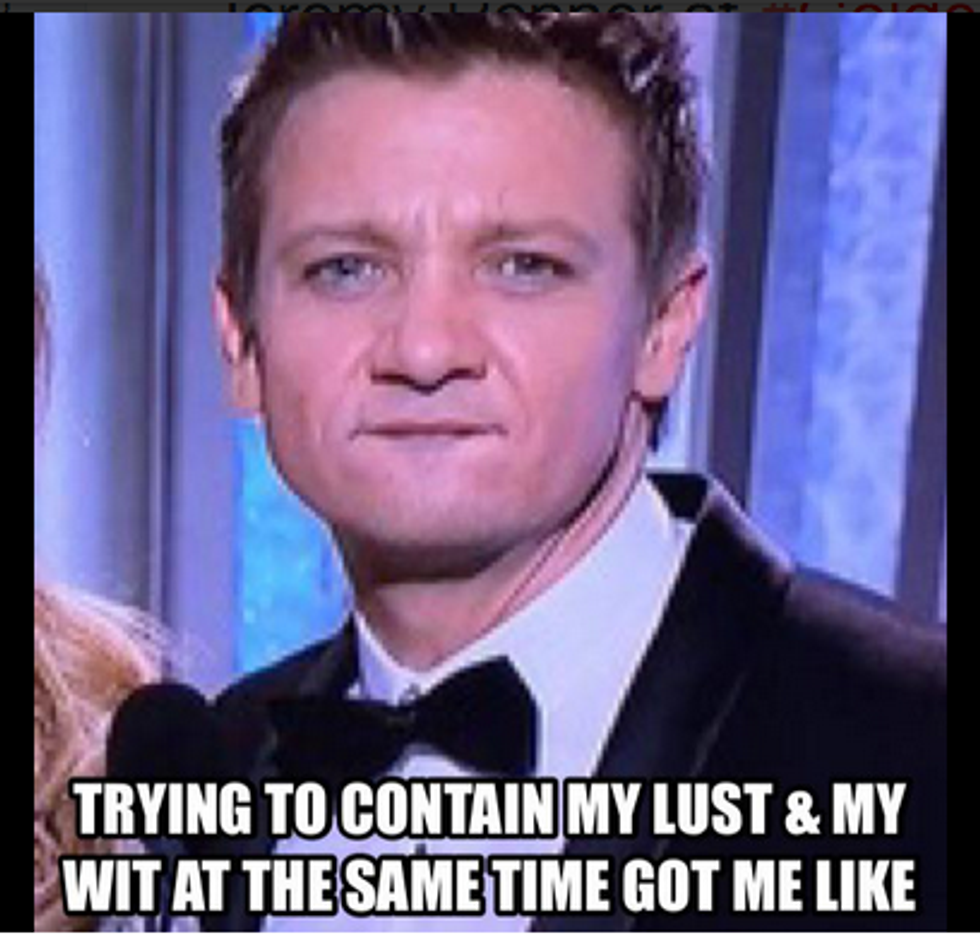 When Jeremy Renner and Jennifer were opening the envelope to announce the winner for Best Miniseries/Drama, he just couldn't help himself!

Jeremy Renner's joke was painfully unfunny and painfully obvious. At least try to be smart or funny if you're going to make a "you got nice boobs" joke. Make it count! Conservative Response:

As if it's not bad enough that Selma, a movie about the Civil Rights Movement, which is critical of some white people, won an award for best song, the hip hop artist Common had to get all deep and articulate about racism:

As I got to know the people of the civil rights movement, I realized, I am the hopeful black woman who was denied her right to vote... I am the caring white supporter killed on the front lines of freedom. I am the unarmed black kid who maybe needed a hand but instead was given a bullet. I am the two fallen police officers murdered in the line of duty.

Selma has awakened my humanity, and I thank you Ava [DuVernay, the film's director]. You are a superhero. You use the art to elevate us all — to bring us together.

5. An educated, progressive, human rights-defending, non-burqa-wearing woman from the Middle East is praised.

First, Tina Fey had this to say about George Clooney's wife:

human rights lawyer who worked on the Enron case, an adviser to Kofi Annan on Syria and was appointed to a three-person commission investigating rules of war violations in the Gaza strip... So tonight her husband is getting a lifetime achievement award.

Then, George himself applauded his better half, while accepting the award:

Amal, whatever alchemy brought us together, I couldn’t be more proud to be your husband.

6. A show about a transgender character gets an award.

7. A 'gaggle of gays and lesbians' and a miners strike.

As if the Transgender wins weren't bad enough, a trailer for Pride, which was nominated for a Golden Globe for Best Motion Picture, Musical or Comedy is presented as  shown and the film is described as being about “A gaggle of gays and lesbians [which] has come out in support of the miners strike." LGBT and labor rights? Worst combo ever!  Conservative Response:

WASHINGTON, D.C. — Rep. Marjorie Taylor Greene (R-GA) on Friday said she would soon introduce articles of impeachment against U.S. Attorney General Merrick Garland in the wake of the FBI's raid of Mar-a-Lago.

A copy of the resolution, obtained by Daily Caller reporter Henry Rodgers, states that Garland should be impeached for personally approving search of Donald Trump's Florida home. The resolution describes the search as "a blatant attempt to persecute a political opponent."