Is American Sniper historically accurate? How the film strays from reality to patriotic mythmaking 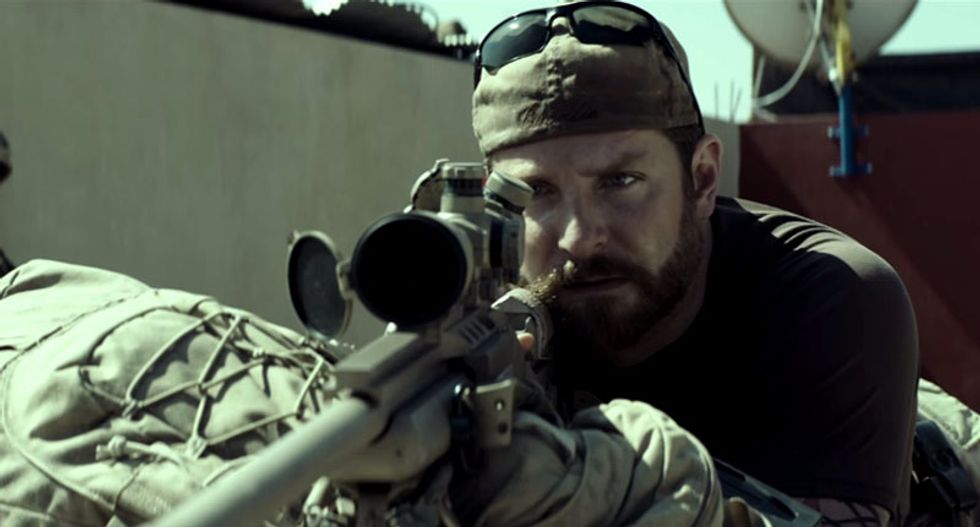 Chris Kyle, known as “Legend”, was a US Navy Seal who served in Iraq in the early 2000s. He is considered the deadliest sniper in US history, with a recorded 160 confirmed kills out of 255 probable kills. He later served as a bodyguard for Sarah Palin.

The opening sequence of the movie, also featured in a trailer , depicts Chris Kyle (Bradley Cooper) with his sights trained on a street in Iraq ahead of a marine convoy. A woman comes out of a house and hands a Russian-made RKG-3 anti-tank grenade to a young boy. She sends the child running towards the convoy. Should Kyle shoot? It’s a tense moment, and the same incident the real Kyle used to open his memoir, American Sniper, on which this film is based. But it has been heightened for the screen. In real life, there was no child, only an adult woman – the film makes her extra-evil by having her send a child to his death. The real Kyle wrote that she had a Chinese grenade. It may have been a smaller hand grenade rather than an anti-tank weapon, which is bigger and easier to see. It was, he wrote, “the first time in Iraq – and the only time – I killed anyone other than a male combatant.” At least, as far as he knew.

Director Clint Eastwood – last seen at the Republican national convention in 2012, telling off an empty chair for invading Afghanistan – reduces everything here to primary colours and simple shapes. Kyle joins the Seals after he watches the 1998 US embassy bombings on TV (in real life, these had nothing to do with his decision). When he gets to the frontline, all Iraqis resisting the US occupation are unquestionably identified as AQI (al-Qaida in Iraq), making them legitimate targets. In the script they’re referred to, without irony, as “savages”, as they are throughout Kyle’s book.

In case you don’t believe they’re savages, the main Iraqi characters – who have virtually no lines – are clearly very bad guys. There is a mostly fictional sniper named Mustafa (Sammy Sheik), a former Olympic marksman, who is mentioned in one paragraph of Kyle’s book but in the film becomes his sharp-shooting, marine-murdering nemesis. In real life, Kyle wrote of Mustafa: “I never saw him, but other snipers later killed an Iraqi sniper we think was him.” In the film, Kyle and Mustafa battle to the death.

Then there’s a fictional terrorist called the Butcher (Mido Hamada), who wears a long black coat and attacks small children with electric drills. The Butcher may be loosely based on Ismail Hafidh al-Lami, known as Abu Deraa, blamed for thousands of deaths in the mid-2000s. The main point is that he’s horrible. In fact, everyone Kyle kills is horrible. The war is a lot easier to support when no Americans ever make a mistake and everyone who opposes them is obviously horrible. You’re either with us or against us. We’re spreading freedom and democracy with guns and drones. God bless America.

Every kill Kyle makes, even with shots taken after split-second decisions, is 100% righteous and saves American lives. The skull logo of Marvel’s murderous vigilante the Punisher is on his vest and his armoured vehicle, yet nobody asks whether that sort of symbolism is going to help win Iraqi hearts and minds. He is a true patriotic American, with a whacking great tattoo of a Jerusalem cross on his arm. That bit is true: “I had it put in in red, for blood,” he wrote. “I hated the damn savages I’d been fighting. I always will. They’ve taken so much from me.”

Kyle suffers after his tours of duty, but only, he says, because he wanted to kill more bad guys to save more marines. He develops a thousand-yard stare, and attacks his own dog at a barbecue. The message of American Sniper is that Kyle is the real victim of the war. The Iraqis he shot deserved it, because – as it has established to its own satisfaction – they were savages. As for non-savage Iraqis who may have reasonable grounds to complain about what happened to their country following the invasion, they must be in some other movie.

This film alters Kyle’s book significantly, but the reliability of his account may also be open to question. In 2014, wrestler-turned-politician Jesse Ventura won over $1.8m (£1.2m) in damages from Kyle’s estate after a jury decided he had been defamed. Kyle claimed he had punched Ventura in a bar after Ventura said navy Seals “deserved to lose some” for their actions in Iraq. Ventura said he had never even met Kyle. In a separate case, Kyle told a writer he had shot and killed two armed men who attempted to carjack him in Dallas. Reporters were unable to confirm this with county sheriffs and medical examiners, all of whom insisted no such incident had ever taken place. Kyle further claimed that he and another sniper had sat on top of the Superdome in New Orleans during the aftermath of Hurricane Katrina, and killed 30 armed civilians he thought were making trouble. Again, this story could not be confirmed by any of the relevant authorities.

One investigating journalist wrote in the New Yorker that these tales “portray Kyle as if he really were the Punisher, dispensing justice by his own rules. It was possible to see these stories as evidence of vainglory; it was also possible to see them as attempts by a struggling man to maintain an invincible persona.” Maybe some of these brags were true, and maybe they weren’t. A lot of this film certainly isn’t – and all the complicated questions it leaves out would have made it a much more interesting story than the Bush-era propaganda it shovels in.

Clint Eastwood’s movie slathers myths on top of Legend’s own legends. Audiences would be well advised to take American Sniper’s version of the war in Iraq with a very, very large pinch of salt.