Jon Stewart: Do the Koch brothers want control of our democracy, or 'would they settle for handjobs?' 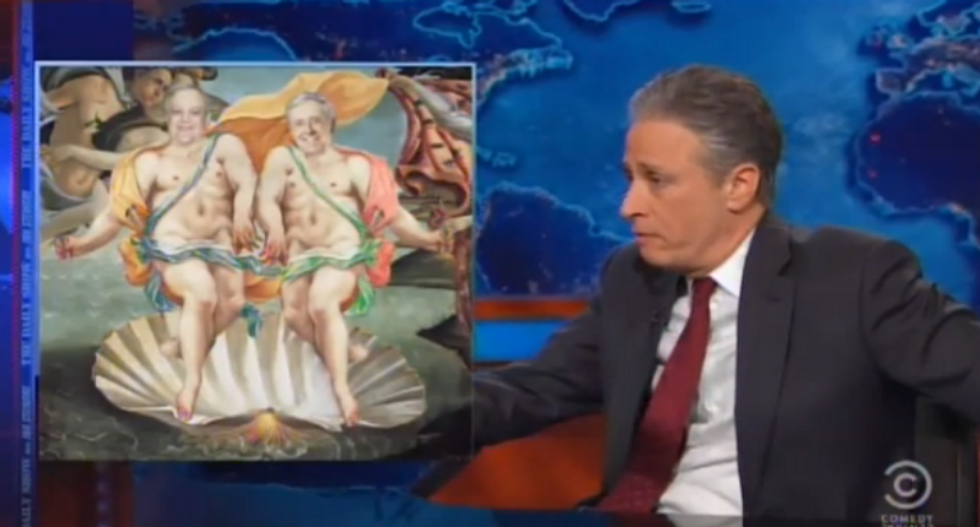 Jon Stewart mocked Sen. Ted Cruz (R-TX) on Wednesday for rushing to the defense of billionaires Charles and David Koch and their plan to spend nearly $900 million on the 2016 elections.

"You may think to yourself, 'That's f*cked up.' Aren't those guys gonna want something in exchange for spending the gross national product of many countries on one election cycle?" Stewart asked. "And is the thing that they want control over the levers of our democracy, or would they settle for handjobs?"

Stewart showed footage of Cruz denouncing allegations about the Koch Industries heads' political involvement as "grotesque and offensive" during their recent donor conference in Palm Springs.

"In fact, they're the picture of benevolent god-kings," Stewart said, motioning toward a picture of the Kansas-based siblings. "All hail the clamshell brothers."

Politico reported that a straw poll taken at the conference showed more support for Sen. Marco Rubio (R-FL) among possible GOP presidential candidates, but Stewart argued that the Kochs' spending was more impressive than anyone in the field.

"I think they should just have the $900 million run for office," he suggested, before announcing, "Give it up for the next president of the United States: Johnny Actualcash."

While the Obama administration skipped out on the solidarity rally in Paris following the Charlie Hebdo killings, Stewart said, both the president and a large -- and bipartisan -- delegation rushed to Riyadh to attend the king's funeral.

"Apparently these motherf*ckers only fight here in America," he observed. "Apparently the only thing that can bring our divided political system together is Saudi Arabia."