Muslim human rights lawyer thanks Don Lemon: Your 'dumb-ass' question made me famous 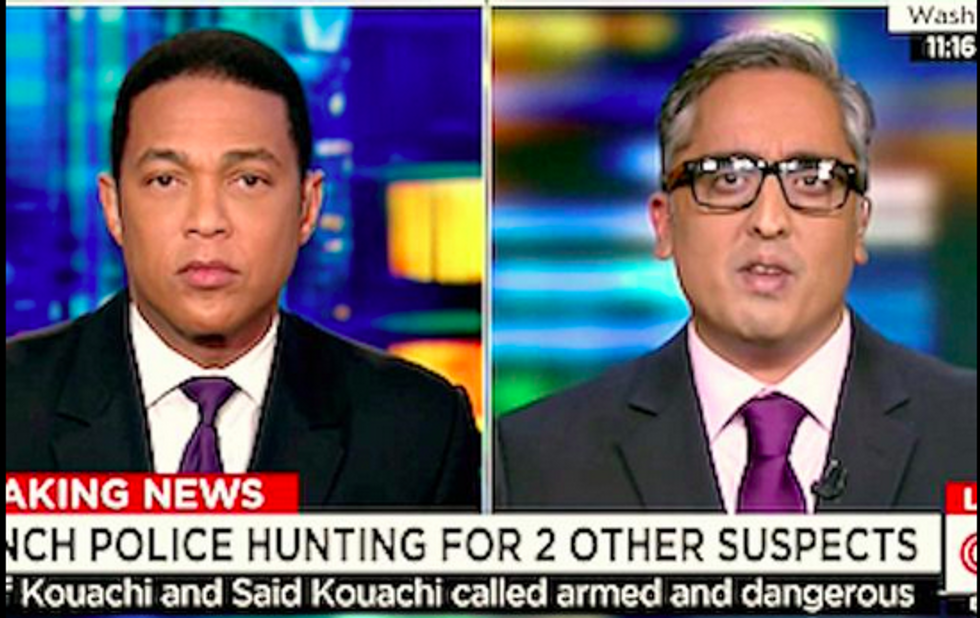 A Muslim human rights lawyer who appeared on CNN has written an open letter thanking the network's Don Lemon for asking him if he supports the radical Islamist group ISIS.

According to Talking Points Memo, Arsalan Iftikhar of the magazine Islamic Monthly published his column on Monday, titled, "Dear Don Lemon: Thanks for making me famous." In it, Iftikhar thanked the gaffe-prone CNN host for asking him such a "patently offensive racist dumb-ass question," because it has drawn attention to Iftikhar's work.

The attorney said that when Lemon first asked the offensive question, he thought the anchor was joking or that he'd misheard.

"Now to be completely honest with you," Iftikhar wrote, "I totally thought that I had misheard him because surely there was no respectable journalist in the world who would ask a Muslim human rights lawyer whether he supports an organization which violates human rights each and every day."

"But then I remembered that I was dealing with Don Lemon," he said, before pointing out that Lemon was awarded the Columbia University Journalism Review's 2014 Worst Journalist of the Year Award for his uncanny ability to find the most outlandish and embarrassing hot takes on any issue.

Iftikhar wrote, "In less than 24 hours, there were nearly 5,000 media articles written condemning Don Lemon for his asinine question in major publications such as BuzzFeed, Deadspin, The Hollywood Reporter, USA Today and more. Most of these articles called the ISIS question just the latest in a series of major Don Lemon on-air gaffes; including his previous theory about Malaysia Airlines Flight 370 perhaps flying into a “black hole” or once asking an alleged Bill Cosby rape victim why she didn’t bite off the comedian’s penis whilst being allegedly raped by him."

As a result, Iftikhar said, journalists and pundits and average citizens all over the world have been Googling his name, following him on Twitter and examining his long record of advocacy and human rights awareness in the Muslim world and beyond.

"I can honestly say that I have never become more 'famous' than after this latest Don Lemon gaffe," Iftikhar said, before implying that Lemon has perhaps brought enough embarrassment on CNN that he may be following the likes of Ed Henry over to a different news network.

"It is a sincere honor to be added to the litany of famous 'Malaysian-black-hole-penis-biting' Don Lemon media gaffes which can be added to his audition tape for his next job at FOX News Channel," Iftikhar wrote.

"So from the bottom of my heart," he concluded, "I want to publicly thank Don Lemon for making me famous with his patently offensive racist dumb-ass question."

Watch video of the interview that started the controversy, embedded below: