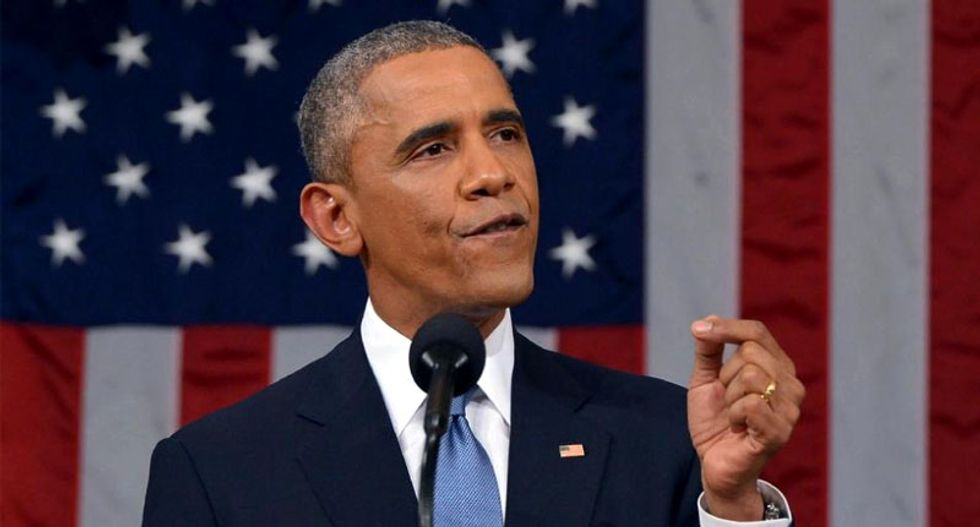 President Barack Obama delivers the State of The Union address on January 20, 2015, at the US Capitol in Washington (AFP Photo/Mandel Ngan)

When Barack Obama looked out into the audience of his State of the Union speech on Tuesday, he was met with a truly historic sight. No Democratic president in the last century has addressed a Congress dominated by so many Republican lawmakers.

The last time a US president delivered a State of the Union address in front of such a large number of Republicans was 1930. And that was president Herbert Hoover, a fellow Republican.

Yet anyone who expected Obama to begin his second-to-last year in office by courting the very adversaries he will need to pass any significant legislation – from tax reform to investment in infrastructure – left disappointed.

There was no sign of a president humbled by November’s electoral defeat. On the contrary, Obama seemed impervious to the new political balance of power in Washington, appearing at times to even goad his political enemies.

There were two especially revealing examples of Obama’s defiance, both of them unscripted. The first came after one of his opening lines, when the incoming Republican majority declined to applaud Obama’s praise for the economic recovery.

“That’s good news, people,” he remarked, as Republicans inside the chamber looked on impassively. Reluctantly, one or two from the aisle to the president’s left – and ideological stage right – began to stand up or offer a tepid applause, following the lead of the new Senate majority leader, Mitch McConnell.

The second off-the-cuff remark arrived toward the end of a nearly hour-long address that, to the dismay of Republicans, did not contain even a single nod to their electoral gains.

“I have no more campaigns to run,” Obama said, in what was intended to signal that his remaining focus will be on governing rather than electioneering.

When Republicans mocked the remark with applause, Obama shot back : “I know ’cos I won both of them.”

In between those two unscripted remarks was a litany of liberal policy prescriptions – none of them new, and almost all of them opposed by Republicans .

Obama did avoid the kind of triumphalism over his executive order on immigration and climate change that risked enraging Republicans. And in contrast to last year’s State of the Union, which was packed with veiled threats about overriding the legislature, Obama steered clear of talk about executive authority.

The fact that the speech, by Obama’s own admission, focused on broad principles rather than specific policy ideas also limited the ensuing criticism.

But his promises to veto whole swathes of potential GOP legislation – and the absence of any significant olive branch for Republicans – left some opponents visibly fuming.

That Obama finished his address by extolling the need for Republicans and Democrats to quit “arguing past each other” and “break out of these tired old patterns” led to complaints of presidential chutzpah.

“It was like he had two different speechwriters,” Colorado’s newly-elected Republican senator, Cory Gardner, told the Guardian. “In the first part of his speech, the president put forward policies that he knows we won’t support. In the second part of the speech, he talked about the need to work together.”

The roughly 300 Republican representatives and senators who funnelled out of the chamber and to nearby Statuary Hall were ready to vent.

Asked by the Guardian what he thought of the president’s televised debate, McConnell simply raised his eyebrows and shook his head.

One of the first to emerge from the House chamber was Florida senator and potential Republican presidential contender Marco Rubio, who was visibly incensed at the president’s call to lift the Cuban embargo.

“I don’t know of a single contemporary tyranny that’s become a democracy because of more trade and tourists,” he said, chased by reporters into an elevator. “China is now the world’s richest tyranny. Vietnam continues to be a community tyranny.”

Cuba was just one of dozens of issues on which Republicans reiterated their disagreements with the president, whom they said appeared unwilling to compromise from behind the podium. Republicans in the so-called “spin room” opposed Obama’s approach to nuclear negotiations with Iran, rejected his interpretation of the science of climate change and opposed his redistributive tax policies.

“He wasn’t trying to find areas of agreement in genuine fashion,” said Wisconsin senator Ron Johnson. “The speech was partisan in content. The part about working together was hypocritical.”

Johnson, though, was one of the a handful of Republicans who saw glimmers of possible compromise – in his case, over cyber-security and trade negotiations with Asian and European nations.

Obama’s call for trade promotion authority, which would empower the executive to expedite free trade agreements, was the single moment in a 6,000-plus word address that elicited more support from Republicans than Democrats.

“It was wonderful to watch the Republicans up on their feet, hollering and screaming for the president, and all the Democrats sitting there with their arms crossed,” said Oklahoma congressman Tom Cole. “Trade is an area we want to work on with the president. It is an area we worked with Bill Clinton on.”

Considered one of the more reasonable voices in the GOP and a close ally of House speaker John Boehner, Cole suggested there might also be room for negotiation with the White House on infrastructure projects and fiscal policy. He noted how, unlike last year’s address, there were no overt threats from the president to overrule Congress with executive authority – even if he did use the word “veto” three times.

But Cole nonetheless decried the lack of outreach from the White House since the Democratic defeats in the midterm elections, and the string of executive actions – on immigration, Cuba and climate change – that have enraged the GOP ever since.

“Frankly, he needs to remember he’s lost the election,” Cole added. “He’s the one who said his policies were on the ballot. Instead, we’ve had one provocative move after another.”