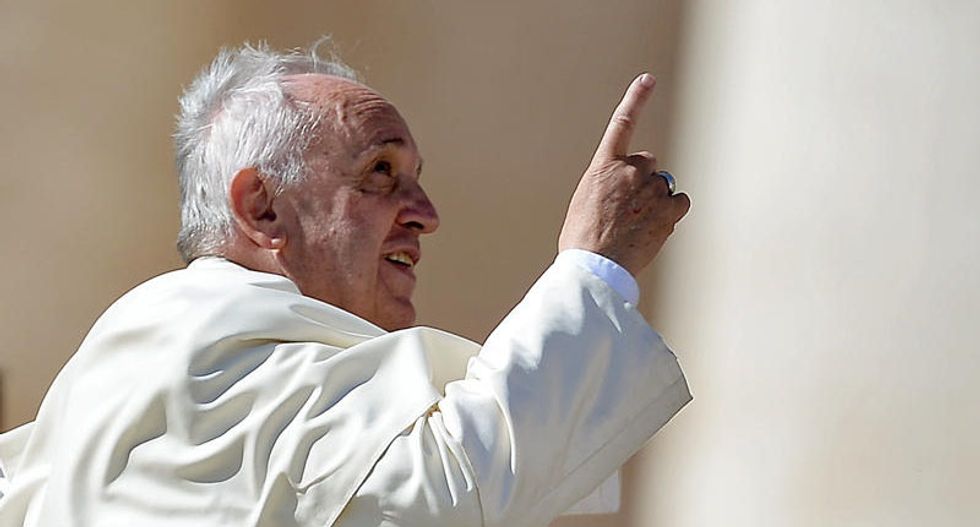 Pope Francis gestures at the end of his weekly general audience on Saint Peter's Square at the Vatican on October 22, 2014 (AFP Photo/Filippo Monteforte)

Pope Francis on Wednesday described large families as a "gift from God," just days after he said Catholics did not need to "breed like rabbits."

In an apparent attempt to put the controversial comments he made on his way back from a visit to the Philippines into context, the Argentinian argued that the global economic system is the primary cause of poverty, rather than overpopulation.

"The meetings with families and young people in Manila were important moments during the visit to the Philippines," Francis told a crowd of around 7,000 gathered in St. Peter's square for his weekly audience.

"Healthy families are essential to the life of society," he said. "It provides us with consolation and hope to see so many large families who welcome children as a gift from God. These families know that each child is a blessing."

The Argentinian pontiff surprised reporters on the papal plane on Sunday by recounting an anecdote about how he had once asked a mother who had seven children by caesarian section and was pregnant with her eighth if she wanted to "leave behind seven young orphans."

"She said, 'I trust in God.' But God gave us the means to be responsible," Francis said. "Some think -- and excuse the term -- that to be good Catholics, they must be like rabbits."

Following the church's teachings did not mean "Christians should have children one after the other", he added in comments that made headlines worldwide.

Catholic teaching prohibits the use of artificial contraception but allows the use of the so-called rhythm method, where couples avoid unwanted pregnancy by planning sex on days during the woman's menstrual cycle on which she is less likely to conceive.