The next right-wing folk hero? A tax-dodging creationist who thinks demons pilot UFOs 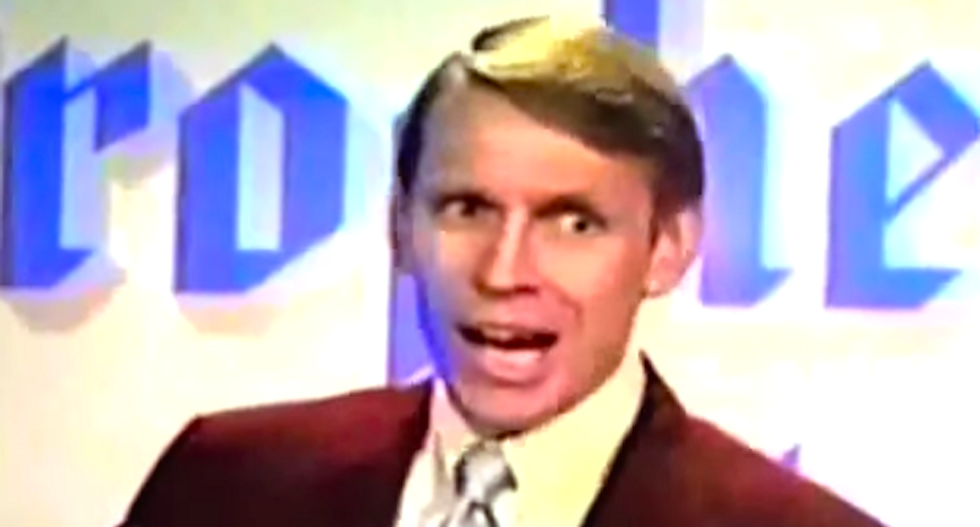 A creationist proponent and “sovereign citizen” known as “Dr. Dino,” who was convicted on federal payroll tax fraud charges nearly a decade ago and is facing additional charges from prison, is campaigning to testify in Congress on IRS abuses.

Supporters – including the flagrantly anti-LGBT Pastor James David Manning – are portraying Kent Hovind as a conservative folk hero persecuted for his Christian beliefs.

They're asking U.S. Attorney General Eric Holder to back off his prosecution of Hovind and invite the minister to testify as part of a congressional investigation of the case.

Although even his son, Eric Hovind, and close associate Ernie Land concede the IRS would not have gone after Hovind if he had complied with tax laws, supporters are trying to rally Christian conservatives to his cause.

“What if the United States government imprisoned you for loving God?” asks one slickly produced YouTube video posted by Free Kent Hovind.

The video also claims communism is based on evolution and warns Christians against the evils of liberal arts college educations.

Before his 2007 conviction, Hovind told his followers that small dinosaurs still exist and dinosaur fossils are created by Chinese factory workers, demons pilot UFOs, and pharmaceutical companies are covering up a cure for cancer.

He also promoted conspiracy theories about fluoride, vaccinations, and the anti-Semitic “Protocols of Zion.”

The creationist Answers in Genesis ministry has accused Hovind of promoting his "young Earth" theory with fallacious arguments.

Hovind has given interviews from prison promoting himself as a victim of a federal government that’s hostile to Christians and creationist teachings, and he’s banking on jury nullification – that is, jurors declining to convict him on laws they believe are unjust – to help him escape criminal contempt charges next month.

The 62-year-old young Earth creationist is set to stand trial Feb. 9 in Pensacola after prosecutors accused him of filing liens against property seized from him after he was found guilty of 58 tax- and banking-related counts and sentenced to 10 years in prison.

Hovind spent five years in the early 2000s fighting a $50 building permit for his Dinosaur Adventure Land creationist theme park in Florida, and he eventually was ordered to pay $675 in fines – on top of the tens of thousands of dollars he spent in legal costs.

He also tried a variety of maneuvers to avoid paying income taxes, including filing Chapter 13 bankruptcy, attempting to renounce his U.S. citizenship, arguing that all of his possessions belonged to God, challenging Social Security as a “Ponzi scheme,” and disputing the legitimacy of U.S. laws.

He has attempted to “withhold his consent” from the criminal proceedings he currently faces, and Hovind has also attempted to renounce his U.S. citizenship again and draw compensation from a fictitious bank account promoted by sovereign citizens.

Hovind’s cause has been promoted by World Net Daily, Ron Paul supporters, and the Rev. Wiley Drake – former president of the Southern Baptist Convention.

The imprisoned minister claims at least one Republican politician may be interested in promoting his cause, but none have been willing to do so publicly.