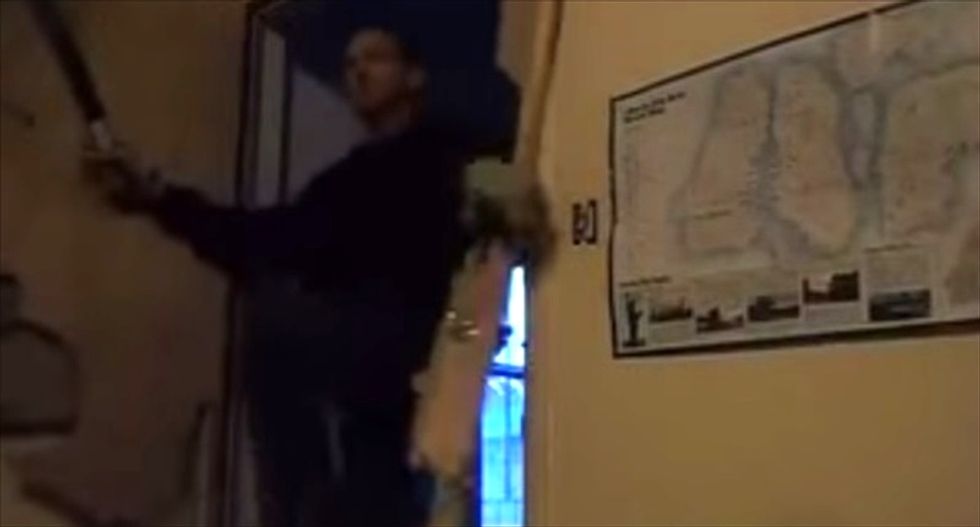 Newly-released video shows the attack that led to a 55-year-old man's prison sentence for storming into his upstairs neighbor's home brandishing a machete, the Idaho State Journal reported.

"In my mind, it lasted for hours, but on the video it all happened in seconds," the victim, James Cvengros, said after watching the video again during the sentencing hearing for the attacker, Twain Thomas, late last week. Cvengros shot Thomas three times in self-defense after he broke into his Pocatello apartment in February 2014.

Cvengros, who set up a camera to film the encounter, is seen with his gun near the beginning of the video. He briefly opens the door before locking it. His girlfriend, Kaila Gearhart, can be heard saying, "Do not let him in."

Another woman can be heard yelling, "Get out!" as Cvengros locks his door. Cvengos testified that Thomas, a military veteran who served in the first Gulf War, broke into that woman's apartment and was chased out before going after him.

About a minute into the video, Thomas' foot can be seen kicking through the door, as he begins forcing his way inside.

"I just remember the look in his eye," Cvengros later said. "It was like The Shining."

As Thomas breaks into the apartment, Cvengros can be heard saying, "calm down." Three gunshots can be heard as Thomas advances, before the camera falls and goes dark.

Cvengros, who hit Thomas in the chest, told the Journal that Thomas continued coming after him after the first two shots. Thomas can be heard moaning as Cvengros says, "Stay down, Twain, stay down."

According to the Journal, Cvengros bought the gun after several prior confrontations with Thomas. On one occasion, Cvengros said, Thomas kicked his door in complaining that Cvengros was playing music too loudly.

Thomas' attorney, Dave Martinez, told ABC News that his client had been diagnosed with both post-traumatic stress disorder and a brain injury stemming from a car accident when he was a teenager.

Thomas served during the first Gulf War, Martinez said, but did not see any combat. However, a neuro-psychologist traced Thomas' PTSD to a a "traumatic" upbringing and an unidentified "hardship" suffered during his military service.

"We had a 55-year-old man who never had any history of violence and he snapped," Martinez said.

Thomas will serve at least 5 years in prison after pleading guilty to attempted murder and aggravated assault charges in connection with the incident. Court records stated that Thomas could serve up to 10 additional years. He was also ordered to pay a $1,200 fine and barred from having any contact with Cvengros until 2025.

Watch the video, as posted by the Journal, below.