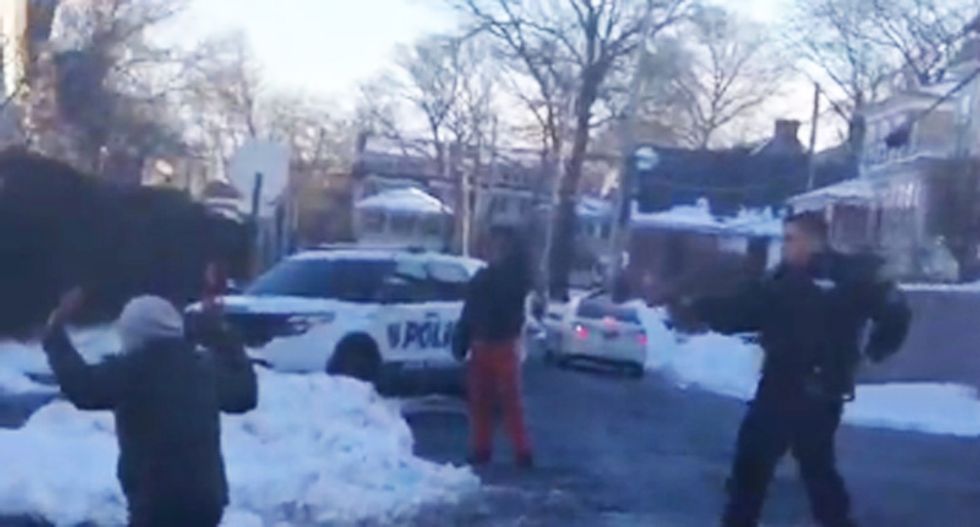 In a video uploaded by New Rochelle's Talk of the Sound, a New York police officer can be seen holding several teens at gunpoint after responding to a 911 call.

In the video, the officer can be seen pointing his weapon at the kneeling teens, telling them "Don't f*cking move, guys," as he approaches them while speaking into his shoulder-mounted radio mic.

As the officer frisks a teen with one hand, while pointing his gun with the other, the young woman filming the encounter on her cell phone explains what led up to the incident.

But New Rochelle Deputy Police Commissioner Anthony Murphy said there was no snowball fight. Police were responding to a 911 call about a teen pointing a gun at another person.

“The video looks terrible, but it’s completely out of context,” the source told the New York Daily News. “It’s a completely different incident than it appears from that snippet. There's clearly a lot of misunderstanding. The record of the 911 call will by itself illustrate what was going on.”

According to LiveLeak, Talk of the Sound -- whose server crashed due to traffic over the video -- has an additional video showing the cop releasing the teens and sending them on their way.

Watch the video below, uploaded by LiveLeak:

[Correction: The original version of this story incorrectly reported that the police officers were responding to a snowball fight.]