What does Sarah Palin's incoherent Iowa catastrophe say about the conservative movement? 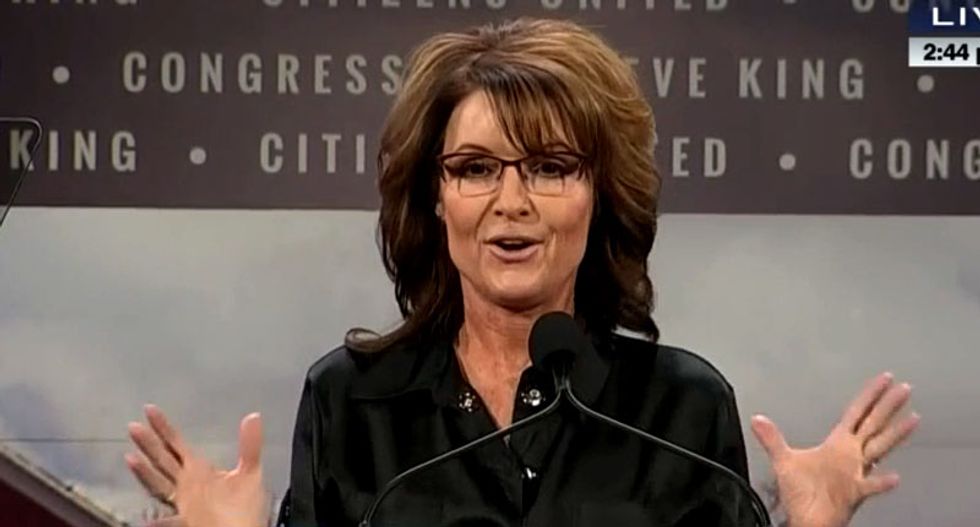 At this point, listening to a Sarah Palin speech is like being taped to a chair with conservative bumper stickers and having gimmick coffee mugs thrown at you. It is the natural conclusion of what would happen if a Big Dogs t-shirt became minimally self-aware and developed a politics. Catchphrases abound — some six-years-old and counting — held together only by the fact that Palin is saying them. Moose chili. Mama grizzlies. Don’t retreat, reload. Hopey-changey. Bill Ayers. Benghazi. Vladimir Putin. Lipstick on a pig. They’re laugh lines without thought, unlinked by a program or even syllogism.

Case in point: at the Iowa Freedom Summit on Saturday, Palin delivered the most unhinged speech of her career. Reportedly, her teleprompter conked out, inadvertently taking thousands of fresh “Obama Teleprompter” jokes with it, so she ad libbed, ultimately going 10 minutes over her allotted time while hurling out rewarmed zingers and bewildering anecdotes. At 35 minutes, watching it was bizarre and exhausting, but its real tone leaps off the printed page in CSPAN’s all-caps transcript : it reads like a Zodiac letter .

Then she told reporters that she might run for president. Twice.

Even by Palin’s heroic standards, it was a disaster: you could watch journalists on social media openly speculating whether she had gone to a bar for lunch and said, “Gimme the Noah’s ark: round up two of everything”. The response was brutal even from the right : conservative writer and curator-of-your-comp-lit-professor’s-1995-haircut Byron York described it as “at times barely coherent”, while no less than Michelle Bachmann’s former campaign manager dismissed Palin as less substantial than other candidates

I hope she never goes away: she is the reddest of the red meat served with the lowest-hanging fruit, and every appearance is some new sublime Schadenfreude-steeped catastrophe. But my amusement should be a problem for movement conservatism.

The right has spent almost every moment of the last six years painting leftists as people gazing in blissful awe at Obama. They have actively ignored the huge contingent of leftists who, yeah, might have voted for him twice but also consider him a naive, extra-judicially murdering corporatist disappointment; instead, the word “Obamessiah” gets a lot of work, almost exclusively not by Democrats.

The accusations of Obamabot-ness feel like an act of projection, of protesting too much, when Palin gets on a stage and a bunch of people in business casual inadvertently reenact the crowd footage from early Beatles concerts. That rock-star treatment then gets paid off with stale one-liners from the previous decade that sound like they were organized by shuffling notecards. Or the crowd gets inane stunts like Palin taking out a Big Gulp cup to “own” Michael Bloomberg and Michelle Obama.

Movement conservatives deserve better. Not just so they can hear newer lines and be given the courtesy of someone obviously trying, but also because she makes it so easy for liberals to mock them.

We know, at least, why Palin sticks around: the cameras. The 2008 campaign instantly made Palin a star, and she witnessed the huge sums she could raise by merely by being herself on the stump. She immediately chafed against the constraints McCain and his handlers put on her then: before it was a book, “going rogue” meant her threatening to no-show speaking events and donor meetings that didn’t interest her and ignoring McCain’s messaging restrictions (about Jeremiah Wright, amongst other things) in order to feed red meat to crowds that went crazy for her punchlines.

The book Going Rogue only added to the sense of stardom, selling nearly 3m copies and staying at atop the bestseller list for six weeks. In July 2009, she quit her job as the Alaskan governor before her first term was up, and within the year had her own show on TLC and a lucrative contributor contract with Fox News. Nowadays, she shows up to CPAC or some other big conservative gathering, and people in chinos scream and hoot for her.

Telling reporters (twice) that she is thinking about running again gets her invited to more paid speaking engagements; it gets people watching her predictable DIY channel ; it gets Hollywood wondering if some other part of her life can be commodified. It it gets people donating to her PAC and buying her merch. And it can drive up the asking price for a new seven-figure book, which someone else will write for six figures, and which can then be bought in bulk and given to people who donate over $50 to her PAC. She’s made herself part of the rich history of the right-wing movement’s large direct-mail octopus , squeezing money out of donors and subscribers whose identities and addresses are bundled and sold to groups hawking gold, God, guns, The Secrets Of Making $1 Million From Home Discovered By A Mom and, of course, One Weird Trick To Repeal Obamacare.

The bigger question then is not why Palin wants to be there, but why anyone invites her. Sure, she drives liberals crazy. Sure, she says all the simple, folksy things that the base wants to hear. Sure, she has guns. Sure, the crowds go wild when she gets onstage. But so does Ted Nugent . On the other hand, she shows up with a lot of baggage, and she’s been accruing it since her run for vice president.

According to John Heilemann and Mark Halperin’s Game Change, Palin’s commitment to the movement has been cause for concern since 2008. In the book, she’s portrayed (in part through interviews with former staffers assigned to her by the McCain campaign) as a candidate who is thoroughly unprepared, unwilling to study, erratic and unfocused. On 10 September – less than two weeks after being named the vice presidential candidate and during preparation for an interview with Charlie Gibson – McCain’s staff realized that “her grasp of rudimentary facts and concepts was minimal”. Among their concerns were her inability to articulate the role of the Fed or “why North and South Korea were separate nations”; her assertions that Saddam Hussein was behind 9/11; and who, exactly, her son was at that point going to fight in Iraq. Advisors Nicole Wallace, Steve Schmidt, Mark Salter and Rick Davis reportedly held a meeting on 27 September to begin “discussing a new and threatening possibility: that Palin [is] mentally unstable”.

And this was her career high point. Though it did take Fox News president Roger Ailes until 2011 to start privately referring to her as “stupid” .

For a group of people – conservatives – who have spent the last six years lampooning liberals’ supposed slavish devotion to Obama while holding themselves up as the party of fresh ideas and money smarts, rapturously applauding one woman’s annual incoherently assembled platter of expired leftovers seems like a bad look. Embracing her so tightly doesn’t reflect well on the people at the other end of the hug. At this point, Palin is a person-shaped unforced error for the conservative movement. Unless everyone lets go, she will stay that way.