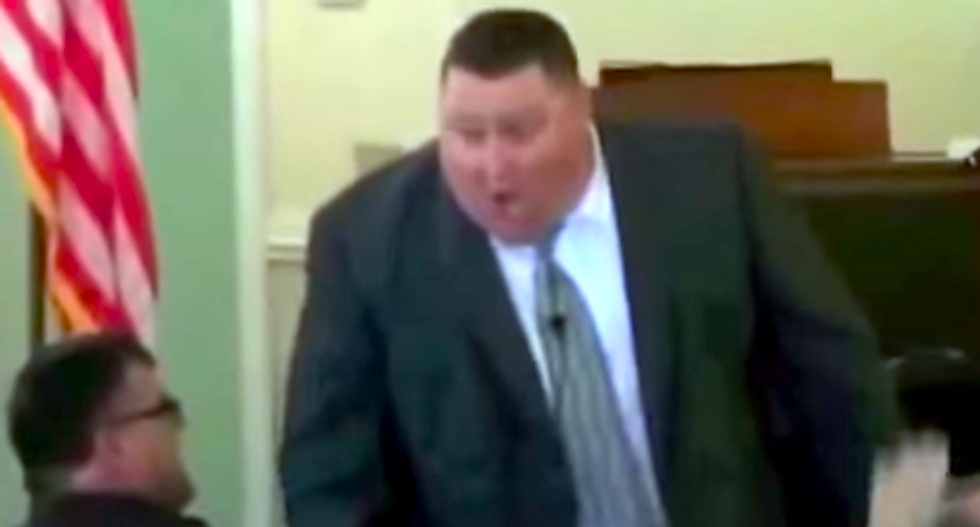 A Georgia pastor ranted against homosexuality in a sermon that seems to imagine Chris Farley’s motivational speaker character as played by Sam Kinison.

“I’m trying to tell you that God created Adam and Eve, not Adam and Steve,” preached Pastor Jim Veitch, of Bible Truth Baptist Church in Griffin. “Somebody say ‘amen’ right there.”

He boasted that he didn’t care what the government legalized or what San Francisco, California, pushes.

“Hey, it’s not the West Coast – it’s the Left Coast,” he shouted. “You better believe that right now! I don’t care what the news media pushes and what the public school has to say, this Bible says marriage is between a male and female! Not male and male and female and female!”

Veitch paced in front of the congregation, mopping sweat or spittle from his mouth with a handkerchief as he bellowed like a professional wrestler.

He recalled a conversation where a friend warned him to watch out for young people who may have been corrupted by popular culture, and he leaned into the face of a man sitting in the front row to deliver the punchline.

He resumed pacing as congregants shouted out complaints about perversion and Boy Scouts.

“I’m not sure what they’re scouting now,” Veitch said, as the congregation roared with laughter. “Are they boy scouting or scouting boys? You help me right there. Somebody write that down, so I can remember that and preach it again!”