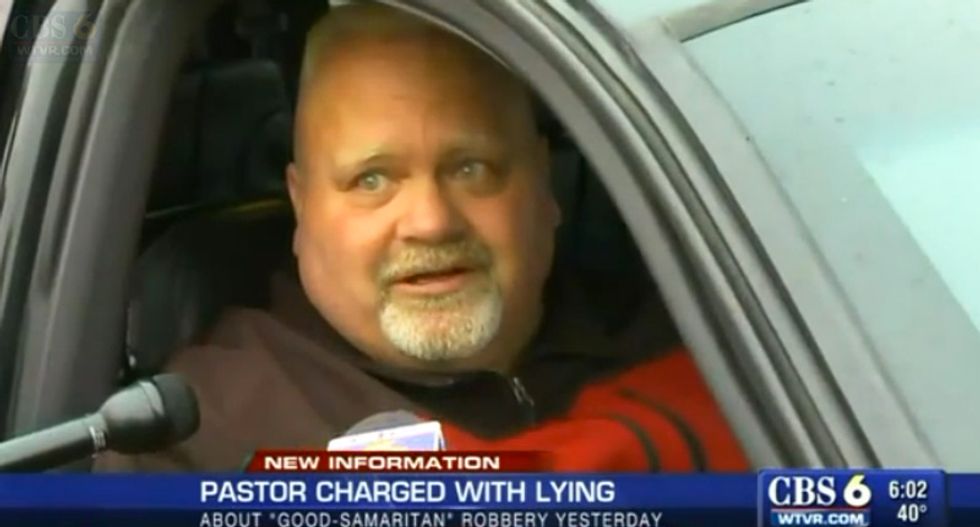 A Virginia pastor has been arrested for lying to police officials after he filed a report stating he had been robbed at gunpoint by a muti-racial couple after he acted like a "Good Samaritan" and stopped to help them with car trouble, CBS6 is reporting.

Pastor George Hunley of Louisa, Virginia, was taken into custody and then released after being charged with making false statements to police, which is a misdemeanor.

Earlier in the week Hunley called police, telling them that he had been shot after pulling over in his car to help a couple who appeared to be having car trouble. According to Hunley, the man -- whom he described as African-American -- pulled out a gun and demanded money. Hunley told police he struggled with man and was shot twice before escaping and driving to his home where called the them.

Hunley described his attackers as a black male and a white female wearing a stocking cap, who had a child with them in their late model Ford Taurus.

According to police, Hunley's story immediately fell apart after they could find no evidence of his blood in his car, but did find his wallet and a checkbook that he claimed had been taken.

According to Louisa Sheriff’s Office Major Don Lowe, there was no robbery.

"Everything right now points to us believing there was no armed robbery," Lowe explained. "There was no bi-racial couple, none of that really happened."

The sheriff's office did not speculate on how Hunley came to have two bullet holes in his leg, but did indicate that he may be asked to pay the police department back for expenses related to searching for his assailants.

Watch the video below, from CBS6: