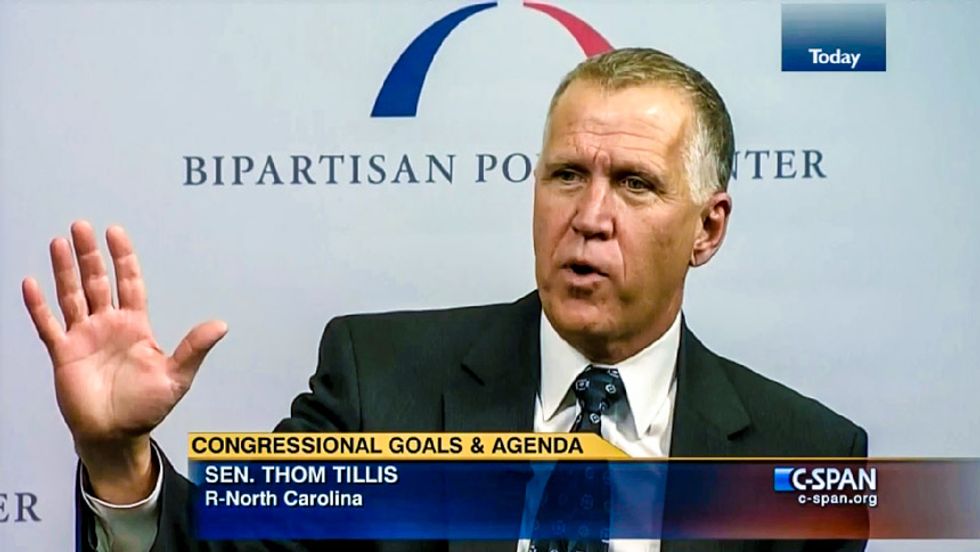 Sen. Thom Tillis (R-NC) argued this week that restaurants should be able to "opt out" of health department regulations that require employees to wash their hands after using the bathroom.

On Monday, the freshman senator ended his talk at the Bipartisan Policy Center (BPC) with a story to illustrate his philosophy on government regulations.

"I was having this discussion with someone, and we were at a Starbucks in my district, and we were talking about certain regulations where I felt like maybe you should allow businesses to opt out," Tillis recalled. "Let an industry or business opt out as long as they indicate through proper disclosure, through advertising, through employment, literature, whatever else. There's this level of regulations that maybe they're on the books, but maybe you can make a market-based decision as to whether or not they should apply to you."

Tillis said that at about that time, a Starbucks employee came out of one of the restrooms.

"Don't you believe that this regulation that requires this gentlemen to wash his hands before he serves your food is important?" Tillis was asked by the person at his table.

"I think it's one I can illustrate the point," Tillis told the women. "I said, I don't have any problem with Starbucks if they choose to opt out of this policy as long as the post a sign that says 'We don't require our employees to wash their hands after leaving the restrooms.' The market will take care of that."

"That's probably one where every business that did that would go out of business," he added. "But I think it's good to illustrate the point that that's the sort of mentality that we need to have to reduce the regulatory burden on this country."

"We're one of the most regulated nations in the history of the planet, and I think if we go about it in a common sense way that that solves a lot of problems. It makes these other big problems that we're talking about imminently more easy to solve."