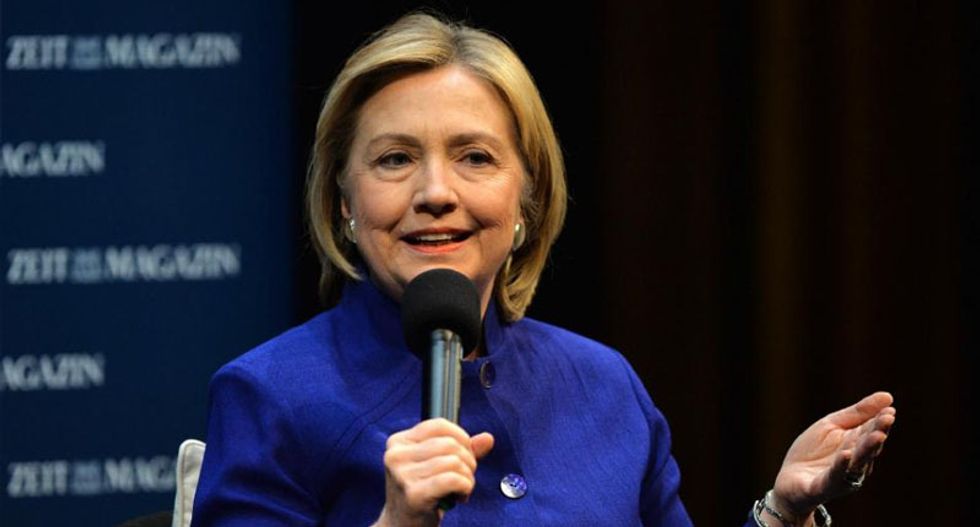 Hillary Clinton has implored female leaders to support and promote other women – especially in the workplace – at a technology conference in the heart of Silicon Valley, offering the best preview yet of how she intends to “crack every last glass ceiling”.

In a keynote address and question-and-answer session on Tuesday, Clinton, the presumptive Democratic frontrunner for the 2016 presidential race, sketched rough parameters around her anticipated candidacy, making it clear that she won’t shy away from gender issues.

The former secretary of state criticized the tech industry about its gender gap and poor record of hiring and promoting women.

“You bump your heads on the glass ceilings that persist in the tech industry,” she said.

“We can literally count on one hand the number of women who have actually been able to come here and turn their dreams into billion-dollar businesses,” Clinton said. “We’re going backward in a field that is supposed to be all about moving forward.”

Clinton also gave a nod to Patricia Arquette’s speech at the Oscars blasting discrimination against women , saying the Oscar-winning actress was “right – it’s time to have wage equality once and for all”.

During her appearance, Clinton spent time addressing issues of income inequality in a manner a crowd of wealthy female leaders found appealing.

“We have to restore economic growth with rising wages for the vast majority of Americans, and we have to restore trust and cooperation within our political system so that we can act like the great country we are,” Clinton said.

“Wages no longer rise with productivity, while CEOs’ pay keeps going up,” she added. “We have to figure out how to make this new economy work for everyone.”

While the potential Republican contenders have been active on the campaign trail, Clinton has been quiet in recent weeks, and the conference was her first domestic public appearance of the year. Clinton was paid for her appearance at Lead On: Watermark Silicon Valley Conference for Women, where tickets for the all-day event were sold at $245. Organizers declined to say how much Clinton was paid for the event.

Following her keynote speech, Clinton answered questions from tech columnist Kara Swisher, of Recode, touching on topics such as Edward Snowden, net neutrality and, of course, her prospective presidential run.

On Snowden, Clinton dialed back her rhetoric on the former NSA contractor, saying: “I could never condone what he did. He stole millions of documents … many of those documents had nothing to do with civil liberties.”

Clinton then scored points with the tech audience by saying she supports the FCC’s plan for tough net neutrality rules.

“I would vote for net neutrality because, as I understand it, it’s Title II [of the Communications Act] with a lot of changes within it in order to avoid the worst of the utility regulations,” said Clinton. “It’s a foot in the door. It’s a value statement, but it’s not the end of the discussion.”

During the onstage interview, Swisher gave Clinton the opportunity to declare her candidacy before the crowd of about 5,000 female technology professionals who cheered wildly at each coy nod to 2016. Clinton declined.

“If you don’t tell anybody – I am obviously talking to a lot of people, thinking [it] through,” Clinton told Swisher. “Because here’s my view on this, Kara: I just think that we have so many big issues we have to deal with that unless we can really come together and have a national conversation about those issues, we’re not going to make the progress we need.”

The women high-fived after Swisher told her: “I interviewed President Obama last week and I’m eager to interview another president.”