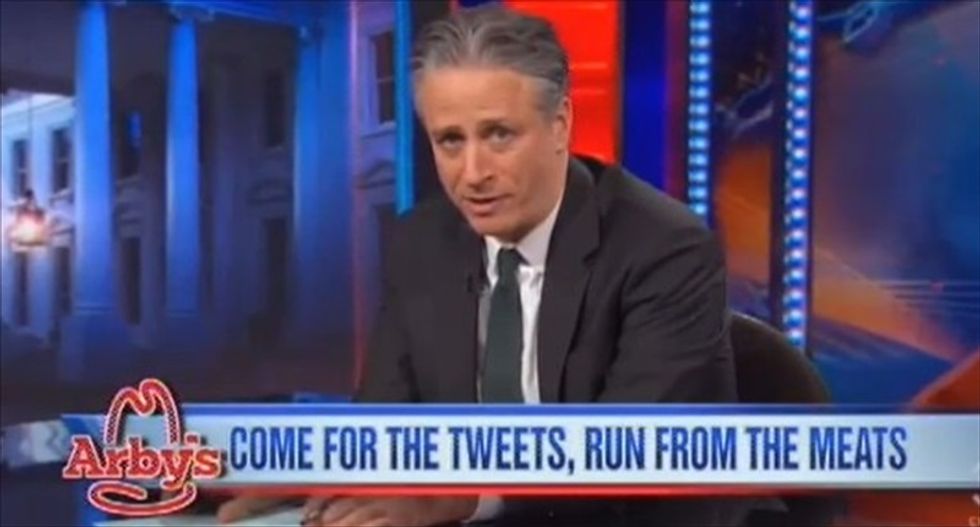 Stewart pointed out that, while Moore argued that a federal court ruling striking down the state's ban on marriage equality would "ring chaos and confusion into the system," local probate judges were openly saying they would not follow the higher court's decision because of their religious beliefs.

And that, Stewart explained, ran against the mandate of Amendment 1, the anti-"Sharia law" bill that bans the implementation of any ruling based on "foreign law." The bill was featured in a report from correspondent Aasif Mandvi last month.

"Where was the Bible written again? Last time I checked, ancient Galilee is not one of the 50 states. Or even one of them territories that nobody knows about. Which makes it foreign law," Stewart said on Wednesday. "The kind of foreign law you'd explicitly banned from judicial decisions. You have f*cked yourselves with your own statute. Or as I hope it comes to be known, Brownbacking."

The "Brownbacking" reference came from Stewart's attempt to create a new term for Kansas Gov. Sam Brownback (R) after he issued an executive order revoking LGBT state employees' right to be covered under workplace protection laws.

"It being Kansas, I guess Brownback clicked his heels three times and said, 'There's no place like homophobia,'" Stewart said.

Stewart also touched on the attention he received on Tuesday following the announcement that he would leave the program later this year.

He also noted that his longtime nemesis, Arby's, offered him a job after his Daily Show run concludes.

"My only question as a future employee would be, to work there, would I have to handle, serve, touch, eat, or even look at what you so generously describe as 'food'?" Stewart asked, before explaining, "That's right, Arby's. This motherf*cking thing ain't over."