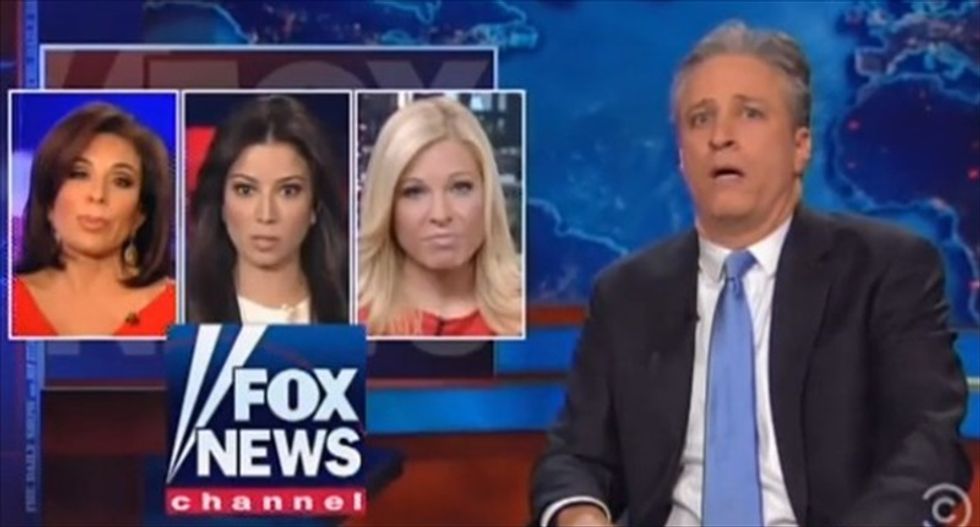 Even Daily Show host Jon Stewart was shocked by Fox News' recent actions on Tuesday -- not that they misreported a story, but that they actually apologized for it.

"I'll be damned," Stewart said after watching examples of what he called Foxus Contritus in action. "How bad does bullsh*t have to smell before the odor is detected by people who live on a mountain made out of that substance?"

The network issued multiple on-air apologies last weekend for reports about "no-go zones" that were shut off to non-Muslims in both France and England.

"Wow, Birmingham, England is totally Muslim and non-Muslims don't go in," Stewart said sarcastically. "That must be so inconvenient for the 78 percent of Birmingham residents who are not Muslim."

Fox's reporting led to not only ridicule from British Prime Minister David Cameron and the French comedy show Le Petit Journal, but the threat of a lawsuit from Paris Mayor Anne Hidalgo.

But even if 'no-go zones' don't exist, Stewart and correspondent Aasif Mandvi said, some Americans are taking steps to stop what they call the spread of "Sharia Law" in the U.S.

Mandvi reported that Alabama voters overwhelmingly voted in favor of Amendment 1. The law, passed last November, bans "foreign law" from being used inside any state court.

"So the law is about protecting Alabama from something that's never been a problem for anyone in Alabama or any other part of the United States, but it could be," Mandvi asked residents during a group interview.

However, none of Mandvi's subjects could name any particular "foreign law" that was in danger of penetrating the legal system.

"It's better to have it and not need it than need it and not have it," one woman told him.

But a skeptical Mandvi changed his tune when the head of the Alabama Christian Coalition, Randy Brimson, informed him that the Bible could be seen as "a foreign law."

"Christianity could be adversely affected by this law," Brimson said.

"Whoa, whoa. Christianity started in the United States," Mandvi responded, prompting Brimson to remind him that it actually started in Judea.

"You're saying Jesus is not American -- do Americans know this?" Mandvi asked.

Watch Stewart's commentary and Mandvi's report, as posted online on Tuesday, below.