Michigan pediatrician: God doesn't want me to treat your baby because you're lesbians 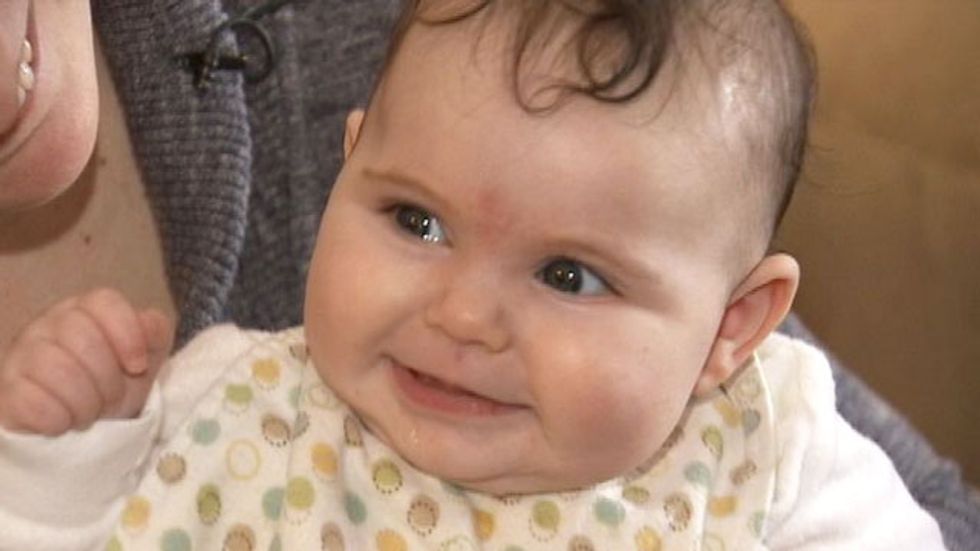 A Detroit-area pediatrician has refused to treat a baby girl because the child's parents are a same-sex couple.

According to MyFoxDetroit.com, Krista and Jami Contreras got a shock when they brought their newborn daughter Bay Windsor Contreras to Dr. Vesna Roi for her first medical visit.

In spite of the fact that they had set up an appointment with Dr. Roi well in advance, they were met by a different physician, who informed them, "I'll be your doctor, I'll be seeing you today because Dr. Roi decided this morning that she prayed on it and she won't be able to care for Bay."

Krista and Jami were shocked.

"As far as we know Bay doesn't have a sexual orientation yet," said Jami to Fox Channel 2, "so I'm not really sure what that matters."

The couple -- who were married in Vermont in 2012 -- had a home birth in October after meeting with Roi for a prenatal consultation. At the time, said Krista, everything seemed fine.

That made the snub by Dr. Roi all the more painful and unexpected, the women said, that their child should face discrimination on her sixth day of life.

"We're not your patient -- she's your patient," Jami told Channel 2. "And the fact is that your job is to keep babies healthy and you can't keep a baby healthy that has gay parents?"

"It was embarrassing, it was humiliating and here we are, new parents trying to protect her," she said. "And we know this happens in the world and we're completely prepared for this to happen other places. But not at our six-day-old's wellness appointment."

The new mothers have found another pediatric group for their daughter. On Feb. 9, the couple received a letter from Dr. Roi that read, in part, "After much prayer following your prenatal, I felt that I would not be able to develop the personal patient-doctor relationships that I normally do with my patients."

She continued, "(P)lease know that I believe that God gives us free choice and I would never judge anyone based on what they do with that free choice."

Krista Contreras told the Detroit Free Press that on that day in October, she wasn't sure at first if she'd even heard the other doctor correctly.

"I was completely dumbfounded," she said. "We just looked at each other and said, 'Did we hear that correctly?'"

There is no federal law or state law in Michigan protecting LGBT people from discrimination by medical providers.

Roi told the Free Press on Tuesday that she can't comment on the case directly and just wants to get on with her work.

"My life is taking care of the babies," she said. "I love my families, my patients. I love my kids. And I have become very close with all my patients."

Attorney Dana Nessel told Fox 2, "We already don't have laws to protect these sort of families. And worse, we are considering passing laws that allow further discrimination."

So-called "religious freedom" laws would allow anyone from florists to wedding cake bakers to pharmacists to hospital anesthetists to refuse to do their job if doing so would violate their "sincerely held religious beliefs."

Only 22 states have laws prohibiting doctors from refusing to treat patients based on their sexual orientation or gender identity.

The American Medical Association (AMA) strongly urges physicians not to deny care to LGBT people, but has no explicit rules regarding the practice.

"Respecting the diversity of patients is a fundamental value of the medical profession and reflected in long-standing AMA ethical policy opposing any refusal to care for patients based on race, gender, sexual orientation, gender identity, or any other criteria that would constitute invidious discrimination," said the group in a statement.

The Contrerases say they hope that by going public with their story, they can ensure that children from same-sex families won't face discrimination in the future.

"Hopefully us telling our story can make sure by the time she's six years old this kind of thing can't happen," said Krista.

View Dr. Roi's letter to the Contrerases, embedded below:

Letter: Pediatrician explains why she refused to treat baby of lesbian couple