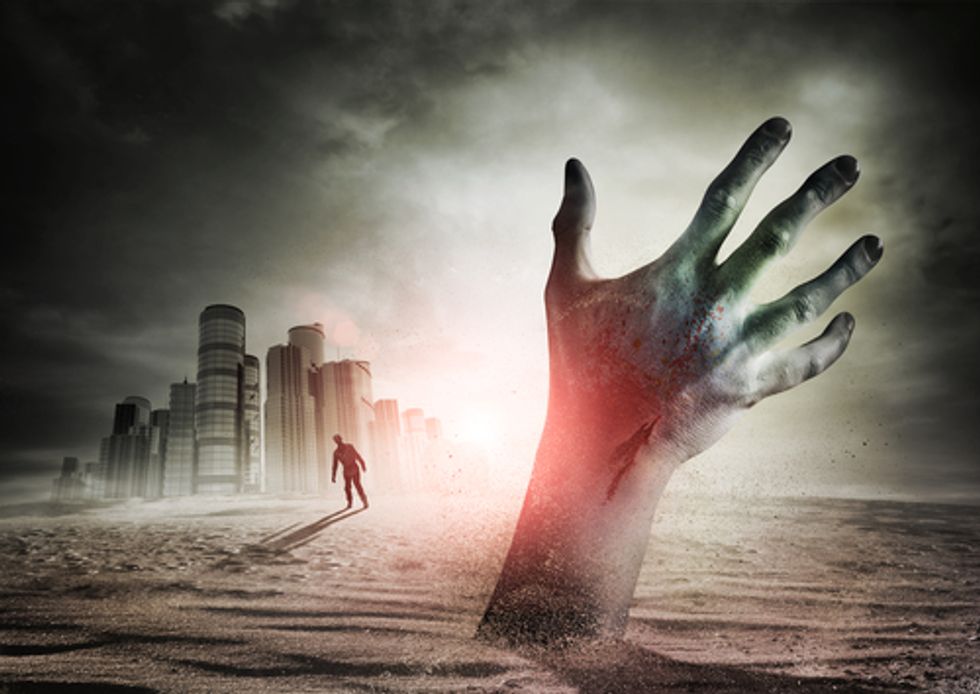 Great, the birthers are back.

I don't know if it's that they're bored or if ISIS has something to do with it or, per Jeb Bush hiring his brother's foreign policy team,* conservatives are interested in starting up another publicity campaign to sell another war in the Middle East the second they secure another Bush in the White House. But for some reason, conservatives have been really turning up the hints that President Obama is a "secret" Muslim, which is, of course, right out of the McCarthy playbook of accusing people of being secret communists.

For those who are unaware, the basic premise of this particular conspiracy theory is that Obama is only pretending to be a Christian, but that he's secretly a follower of Islam who wants to bring death to America. The theory is an offshoot of birtherism, which is the belief that Obama is faking his American citizenship. There's many variations on this, but all share two basic false premises: 1) All Muslims hate America and 2) Obama's rise to the presidency shows this secret Muslim conspiracy to end America has reached the highest levels of government. All variations also are just a rather unsubtle way for conservatives to imply that black Americans are not "real" Americans.

Since the Obama-is-a-secret-Muslim theory is just birtherism, slightly remixed, I thought it was put to bed back when the growing chorus of conservatives hinting belief in the fake birth certificate theory was put to bed, when Obama shamed them into silence by producing the long form birth certificate. The whole incident was an embarrassing reminder that Republicans, in their hatred of Obama, had allowed racist conspiracy theories to run unchecked and swirl ever closer to the mainstream positions of their party and being called out so publicly like that mostly quelled the hinting around about Obama's supposed Kenyan birth.

But now it's back, starting with Rudy Giuliani making some statements about how Obama isn't a patriot, which is understood widely as a euphemistic nod towards the birther/secret Muslim conspiracy theory. That this is what he was doing was confirmed when he tried to cover his ass by saying, "“Some people thought it was racist — I thought that was a joke, since he was brought up by a white mother, a white grandfather, went to white schools, and most of this he learned from white people."  He added, “This isn’t racism. This is socialism or possibly anti-colonialism.” Considering that the journalist in question doesn't seem to have asked about race, this defensive posturing suggests that Giuliani was absolutely making reference to the birther conspiracy theory when he said, "He wasn’t brought up the way you were brought up and I was brought up, through love of this country."

And the fact that he whips out the "joke" line to defend something that isn't funny at all and he doesn't seem to really think of as funny only doubly confirms it. Back in 2011, Adam Serwer noted that the "I'm joking" birther comments had become a genre of birtherism on their own:

So yeah, very little doubt there that Giuliani was making a birther comment to his audience and now has been caught flat-footed and is spinning furiously. Of course, one strategy birthers employ when caught hinting at stuff that is demonstrably false---the birth certificate conspiracy, the "secret" Muslim thing---is to start arguing that the burden of proof is not on them to provide evidence that the president is secretly conspiring with ISIS. No, they believe Obama bears the burden of proof to show that he's not.

So you have Giuliani:

He also challenged a reporter to find examples of Mr. Obama expressing love for his country.

“I’m happy for him to give a speech where he talks about what’s good about America and doesn’t include all the criticism,” Mr. Giuliani said.

So you can see how this game is played. If you do provide quotes from Obama praising America, then those quotes will be deemed not good enough. Anything short of the President dropping trou and jacking off at the first few notes of "The Star-Spangled Banner" is considered proof that he is a secret Muslim America-hater.

Erick Erickson was playing the same game with Christianity:

This game is familiar to anyone who has seen dudes playing it online in order to undermine feminists. Luke McKinney at Cracked called it the "Duh-DoS" strategy:

A Distributed Denial of Service (DDoS) attack is when multiple sources overload a target computer with requests to prevent it from getting anything done. The Duh-DoS is the organic equivalent, with multiple people asking duh-worthy questions. If the target answers, they're wasting their energy on someone with no intention of listening. If they don't answer, they're accused of admitting there's no real problem. No matter what they do they're at a disadvantage, which is exactly the problem they were fighting in the first place.

It works on more infernal and shittier levels than a Malebolgian leak. It resets every discussion (imagine a basketball forum demanding that the concept of points be re-explained at the start of every thread). It automatically devalues the woman's experience, because her statement that she experienced sexism is invalidated by implication: She must provide external proof. It also elevates the questioner to the position of authority, the ultimate judge who must be satisfied before he'll deign to consider the problem. As opposed to an asshole rando begging for the block button.

In this case, a woman's experience isn't what the Duh-DoS are devaluing, but Obama's experience of being an America-lover and a Christian. They come at him with a bunch of asinine accusations and when people point out that the accusations are asinine, they start demanding higher and higher levels of proof that the accusations aren't true. But it's obvious there is literally no level of proof that they will accept, because the point of this exercise is to establish white conservative men as the arbiters of what counts a "patriotic" or "Christian" or "American". But the reality is anyone playing this game has only performed the service of showing they never deserve to be taken seriously again, in case you were making the mistake of taking them seriously in the first place.

*Seriously, if Jeb Bush's opponent doesn't show this Venn diagram every chance they get and ask if we really need a third war with Iraq, they are failing basic campaign tactics. 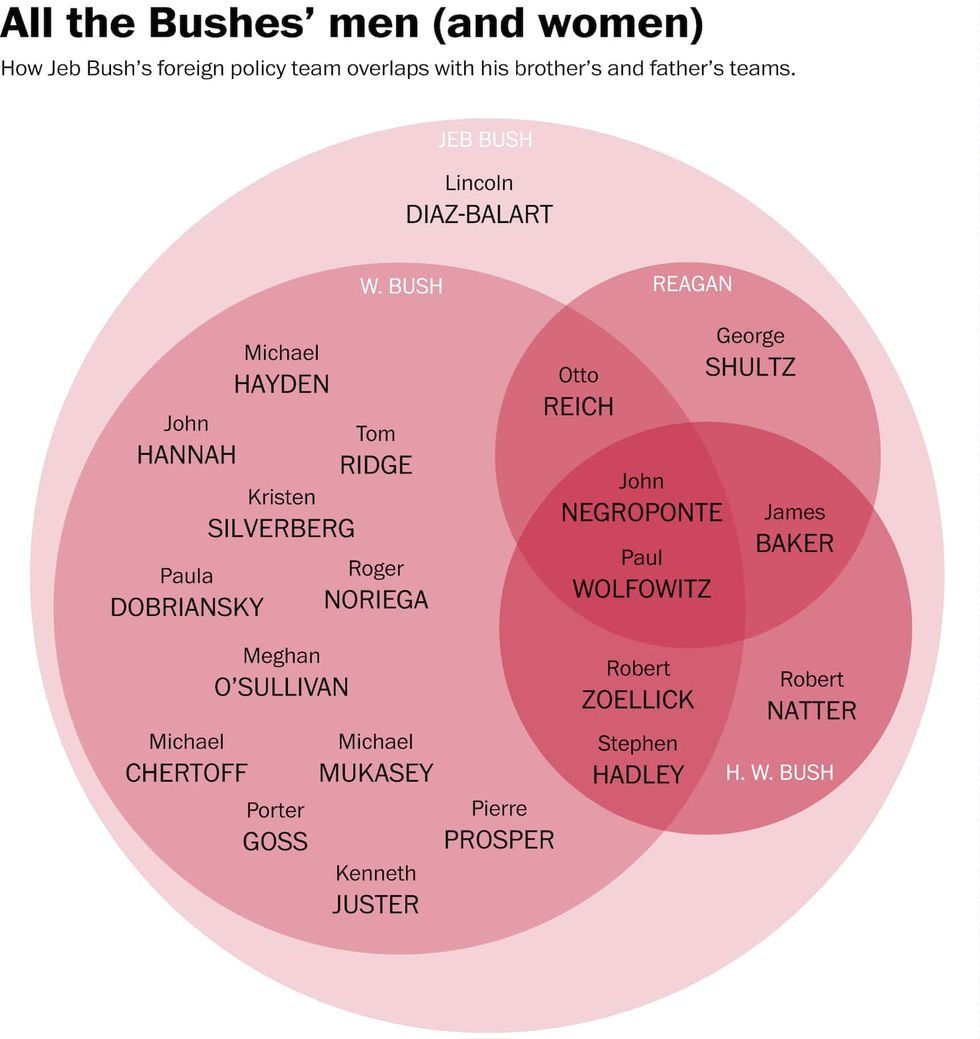