Pat Robertson warns of bestiality wedding cakes: 'What if somebody wanted to marry his dog?' 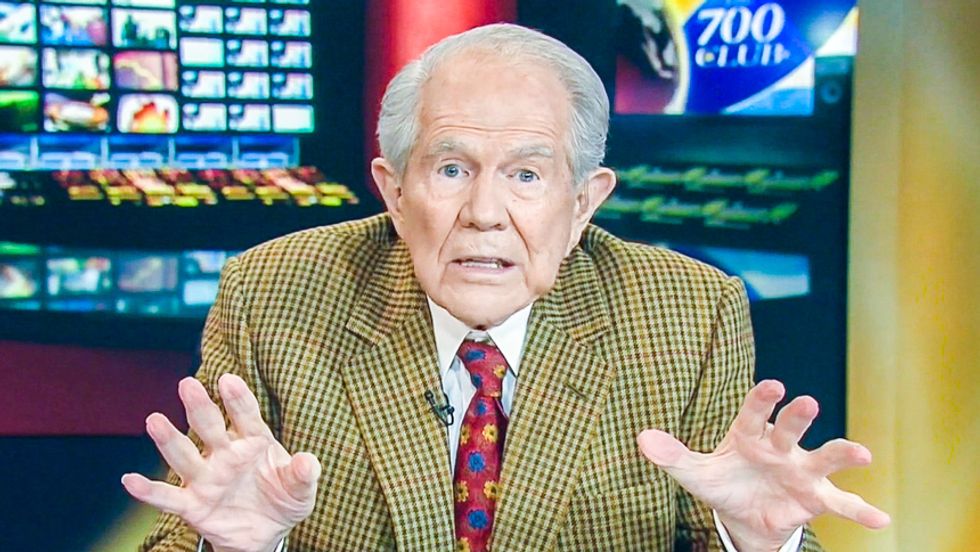 TV pastor Pat Robertson warned on Thursday that the government could force Christian florists and bakers out of business if they did not cater to weddings where men marry dogs.

After a Washington state judge found on Wednesday that a Christian florist had violated the state's anti-discrimination law by refusing to sell flower arrangements for a same-sex couple's wedding, Robertson asserted that an "intelligent judge" would have ruled against the gay men.

"To say that some procedural anomaly in the statute overrides the fundamental religious freedoms of the people, it's just crazy," he insisted. "And I hope that the lawyers for this florist will appeal this thing to get into the federal courts."

"But this is outrageous!" the conservative preacher continued. "To tell a florist that she's got to provide flowers for a particular kind of wedding. What if somebody wanted to marry his dog? She's got to have flowers for that? What if there's a polygamous situation where a guy has five wives and he wants to have five ceremonies, and she's going to be forced by the law to provide them flowers. I mean, this is crazy."

Robertson recalled that a court had also ruled that George Washington University had to provide accommodations for a "campus gay group."

"I asked [Cardinal John O'Connor], 'What would you do if you were in charge of it?' He said, 'I'd close the school down. Just like that, I'd close it down.'"

"Well, some of these bakers and florists may be forced out of business if the courts make them do things contrary to their beliefs," the televangelist concluded.