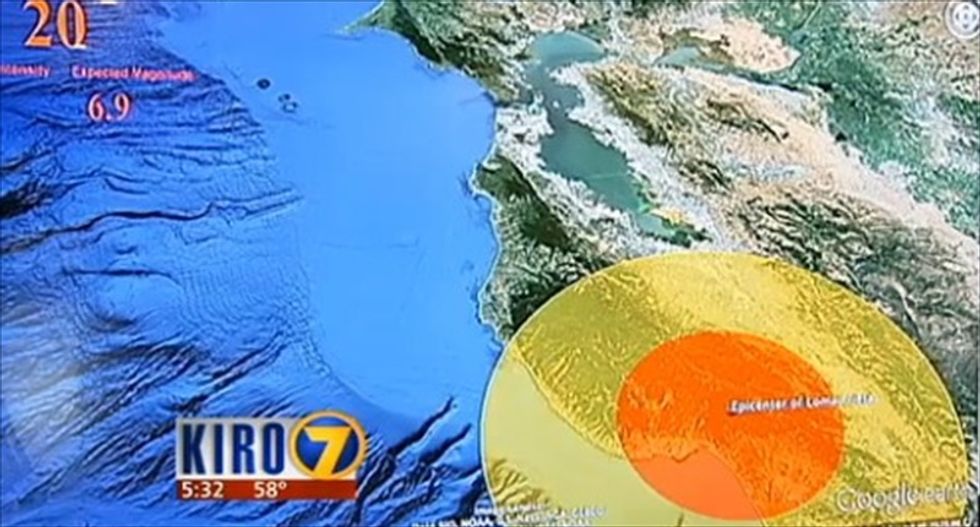 Testing began on Tuesday on the first early warning system to predict earthquakes before they rattle Oregon and Washington, with a group of businesses and hospitals trying out the tool before it is made available to the public, scientists said.

The Pacific Northwest Seismic Network system will emit a blaring siren and a vocal warning that says "Earthquake. Earthquake. Shaking to begin in ... 15 seconds," the research team from the University of Washington said in a statement.

The technology will issue an alert for any earthquakes above magnitude 3, which typically occur somewhere in Washington and Oregon about every two to three weeks, it said.

A group that includes hospitals, utilities and emergency managers in the Pacific Northwest, as well as major Seattle-based corporations Boeing and Microsoft, were meeting on Tuesday for a workshop on implementing and testing the new system.

"The test group is a cross-section of our region's economy so we can find the best ways of reducing losses from the next earthquake," director John Vidale, a professor of Earth and space sciences at the University of Washington, said in the statement.

The technology, based on a similar tool being implemented in California, was created by researchers from the University of Washington and University of Oregon, and is overseen by the U.S. Geological Survey.

Hundreds of seismometers around the Pacific Northwest will send readings to computers at the University of Washington, which will analyze the data and create an automated alert as quickly as four seconds after detecting quake activity.

Japan developed an earthquake warning system after the devastating 1995 Kobe temblor, which caused 6,000 deaths. When the system picks up an earthquake, the public is warned via television and radio stations, cell phone alerts and loud speakers.

The Pacific Northwest tool will be made available to the public after a robust testing period.

"Eventually, we want to provide simple, fast and uniform coverage to protect the citizens and infrastructure," Vidale said.

The Pacific Northwest is part of the Ring of Fire, which arcs around the Pacific Ocean and is home to more than 400 volcanoes and 90 percent of the world's earthquake activity.

In 2013, the Oregon Seismic Safety Policy Advisory Commission issued a report warning that as many as 10,000 people could die when, not if, a massive earthquake and tsunami occurs in a fault off the Pacific Northwest coast.

Watch a report on the system, as aired on KIRO-TV on Tuesday, below.