Right-wing CPAC 2015 wants you to know: You are in terrible danger 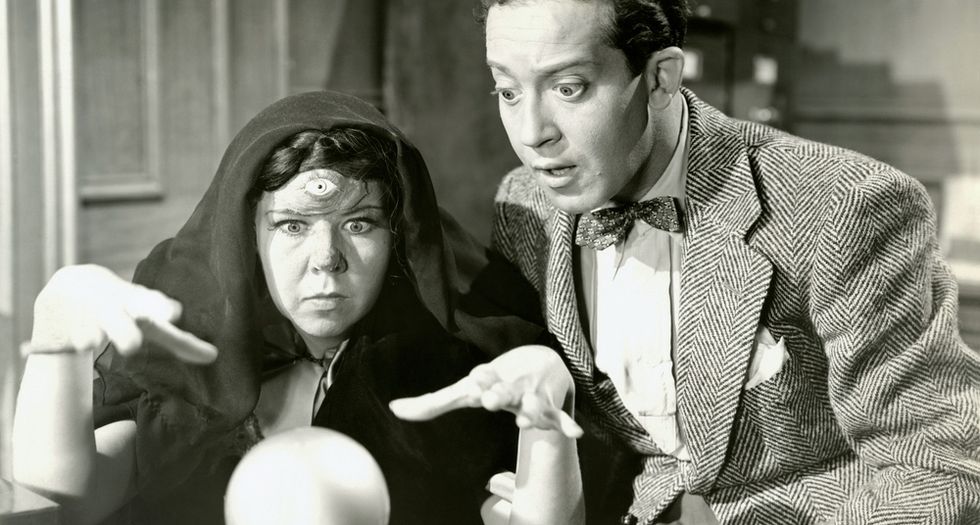 From warmongers to conspiracy theorists, all of those present can agree that America needs to be afraid

Welcome to the Conservative Political Action Conference, a three-day-long performance from an improv troupe whose hat has only has one statement in it: you’re in terrible danger. But that doesn’t mean you’re in terrible danger right now. Right now, there are seminars. About the danger. I have been to them, as part of my quest to be America’s Most Impervious Man. I don’t even care to what.

After a lunch consisting of a bowl of nails and a mean old dog, I attend the “America at Risk” seminar featuring speakers “Callista Gingrich” and “Newt Gingrich.” Technically, this statement is true, because they speak, and their words come out of speakers. Unfortunately, neither are here. Instead, after spending approximately one jillion dollars to attend CPAC, everyone in the Gaylord Hotel’s Chesapeake Rooms 4-6 gets to watch a $9.99 DVD . From 2010.

“America at Risk” is a well-shot piece of propaganda, with appropriately sinister documentary music and Ken Burns-esque pans across pictures of bad people. At one point, we are informed that, in 2009, “There were over a dozen terrorist cases in the United States.” The vague wording really works for me. I immediately wonder which of the dozen involved that white Nazi from Maine trying to build a dirty bomb or the white Nazi patriot shooting people at the Holocaust museum . Then I realize that these terrorist “cases” probably did not include white people, militias, separatists or sovereign citizens, since the number would probably be off by an order of magnitude.

Still, I enjoy seeing Marc Theissen claim that waterboarding works, that the Muslim Brotherhood controls one third of all mosques in America, and listening to a man explaining that we are currently experiencing Islam’s “third great jihad.”

Of course, what I enjoy is irrelevant. What the audience revel in is hooting at the screen whenever Barack Obama says anything divergent from what they agree with. “Islam has a proud history of tolerance”, Obama says in 2009. “Yeah where?” answers the audience, who call him an “idiot” and “liar,” before subsiding with a lot of sheeshes and head-shaking. “We see it in Andalusia, during the Inquisition,” Obama goes on to say. “Yeah, when they killed everyone” adds someone who does not seem to be aware that neither history books, the Muslims of Cordoba or Barack Obama can hear him.

I eventually leave the room and start heading to the other side of the Gaylord, where former UN Ambassador John Bolton, Arkansas Senator Tom Cotton and Montana Representative Ryan Zinke answer the question: “When Should America Go to War?” And, folks, lemme tell you, it is all the dang time.

Watching these guys is amazing. Bolton, inventor of FreeRepublic.com ’s mandatory mustache, opened early with, “We should have stopped Hitler at the Rhineland in 1936.” Cotton says, “If any state in the west had stood up to Adolf Hitler,” then sort of trails off into nothingness, perhaps remembering 1939-1945. When talking about how extreme force acts as a deterrent, Cotton says, “America is like Rome,” without mentioning Rome’s unnecessary wars of profit that served as a distraction from domestic political unrest. Churchill’s name comes up twice.

Bolton’s core thesis is that, “American strength is not provocative. American weakness is provocative”. Hence the allusion to Rome and the old Roman expression, Si vis pacem, para bellum . He then says that, “This is not a debate between interventionism versus non-interventionism, or between unilateralism or multi-lateralism,” which seems fairly obvious as soon as he starts talking about unilaterally going to war to stop anything he can think of. Cotton adds that the world has to know that we are willing to go to war to defend our national security interests, especially against trans-national terrorist groups. In a span of only few words, he has defined US interests as “everything everywhere.”

When asked if he would have supported the Iraq War, Cotton says he would have agreed with “Hillary Clinton and John Kerry, who made the right decision to support president George W. Bush.” This audience hoots, too. That is, until Zinke says that he would not have supported the 2003 invasion. The comment stings, since Zinke was a Navy SEAL and also opened his comments moments earlier by noting that he’d been to more funerals than there were people in the packed room. I guess you can’t win ‘em all.

Somewhere after the actual veteran has Debbie-Dowernered things, the Heritage Foundation’s James Carafano tells the assembled crowd that “we need to get back into the missile defense business in a big way.” What a funny way of phrasing that.

Still Bolton is on his game. You don’t get to be the Ur-Stache by being a slouch. “The war was correct,” he says, saying that Saddam would have had uranium-enriching centrifuges up and running immediately. “This saved the world from a nuclear disaster,” he says, which is a good job, considering all the other disasters just around the corner.

He then goes on to explain that we should have spent the last ten years better integrating the Baltic states into NATO, to discourage further Russian expansion.“We’re past that,” he says, sadly. “That’s why we’re in such danger.”

Businesses weigh asking customers to put masks back on in light of new CDC guidelines. ‘For most people, this is a huge step backward’

CHICAGO — At least one Chicago grocer didn’t wait for updated recommendations from health officials to require customers — vaccinated or not — to mask up again while shopping. Green Grocer Chicago owner Dileep Gangolli brought back the store’s mask requirement about two weeks ago as COVID-19 cases began to rise. After looking at the area’s vaccination rate, Gangolli said he worried the risk of a customer or employee contracting the virus was too great. “My fear was one of someone coming in not even knowing that they were infected,” he said. New guidance from the Centers for Disease Control and...