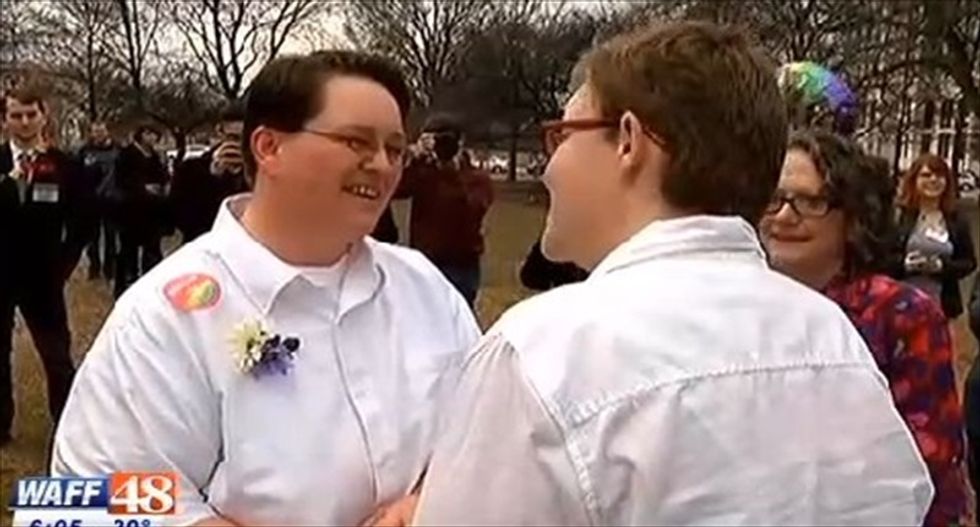 A same-sex couple gets married in Alabama. [WAFF-TV]

A Baptist church in Huntsville, Alabama could soon be kicked out of a group of Southern Baptist churches after openly supporting marriage equality and hosting a same-sex wedding ceremony, The Birmingham News reported.

Members of the Madison Baptist Association reportedly recommended "disfellowshipping" Weatherly Heights Baptist Church following a meeting on Tuesday regarding a Feb.9 ceremony performed by Rev. Ellin Jimmerson, an unpaid "minister to the community" at Weatherly Heights.

The group, which contains about 90 congregations in Madison County, will formally vote on the issue on March 5.

By the time Jimmerson performed the ceremony, the association -- an affiliate of the Southern Baptist Convention -- had criticized the federal court ruling that struck down the state ban on marriage equality.

"We are deeply saddened that, as of February 9, 2015, homosexual couples have been permitted to marry in Huntsville and the state of Alabama," the group said in a statement. "The Madison Baptist Association in no way endorses this decision or its resulting actions."

Weatherly Heights' senior pastor, David Freeman, had expressed support for same-sex marriages in a September 2013 sermon that was posted online, saying that the Bible "does not address adult, loving, monogamous, same-sex relationships."

"The church has taken the passages that address promiscuity, predators, and abuse and applied them to homosexual relationships in general," Freeman said in the sermon. "That, in my opinion, is wrong."

Freeman confirmed the meeting to the News, conceding that his beliefs ran counter to the association's by-laws.

A spokesperson for Freeman's church, Heather Reed, told WAFF-TV that membership has increased since Jimmerson's ceremony, fueled in part by "wedding week," an event where several churches who backed marriage equality provided volunteer ministers after probate judges refused to give gay and lesbian couples marriage licenses.

"I've gotten so many messages since wedding week just saying how enthusiastic they were that the church was so involved and that right now Weatherly Heights Baptist would take that stance, to stand on the right side of history," Reed said. "So many people have asked me, 'Can I go to that church? Will they accept me there?' They're ready to get back into church."

Watch WAFF's report, as aired on Wednesday, below.