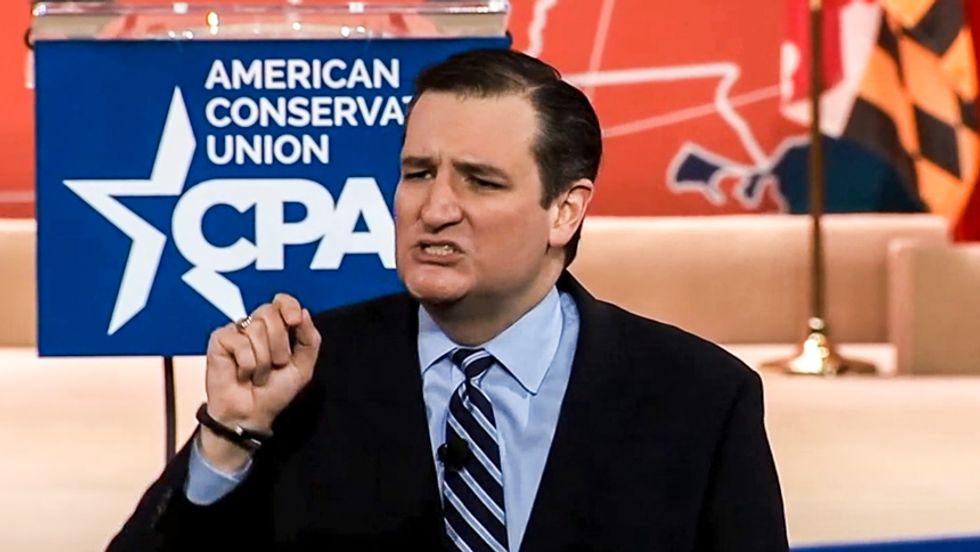 Probable presidential candidate Texas Senator Ted Cruz did his best to claim the mantle of Ronald Reagan at CPAC on Thursday with a fiery speech about how he was not all talk, but all action.

But things got really interesting at the end of his talk and then the q&a session afterwards. In the video segment we've embedded below, you'll see Ted ask people to text the word "constitution" to a telephone number. Why? Who knows. He didn't say. But it seemed patriotic as all get out.

He thanked the crowd, and then Fox News host Sean Hannity joined him on stage to ask him questions.

Earlier in the day, when Laura Ingraham had done the same with New Jersey governor Chris Christie, she did a pretty good job asking somewhat challenging questions, which Christie handled with some flair.

Hannity, however, lofted the friendliest softballs imaginable to Cruz in what quickly turned into a Lloyd and Harry routine.

Hannity started out by daring Cruz to reveal, how had he bravely survived criticism for helping to shut down the government in 2013?

Hannity: Tell us how much you hate the Republican leadership in Congress.

Cruz: I want to disrupt politics like I was Uber.

Yadda, yadda. But then, Hannity finally asked an interesting question: What did Cruz think about Colorado legalizing marijuana?

Cruz joked that Colorado had supplied CPAC brownies, and he and Hannity then indulged in a little stoner humor as Cruz kidded about being on the 'Magical Mystery Hannity Hour.' Mr. States Rights then had to admit that if Colorado wanted pot, it was OK with him, even though he doesn't favor legalization himself.

And so it went. It was definitely the most entertaining segment of the first half of CPAC's first day. Here's the video...