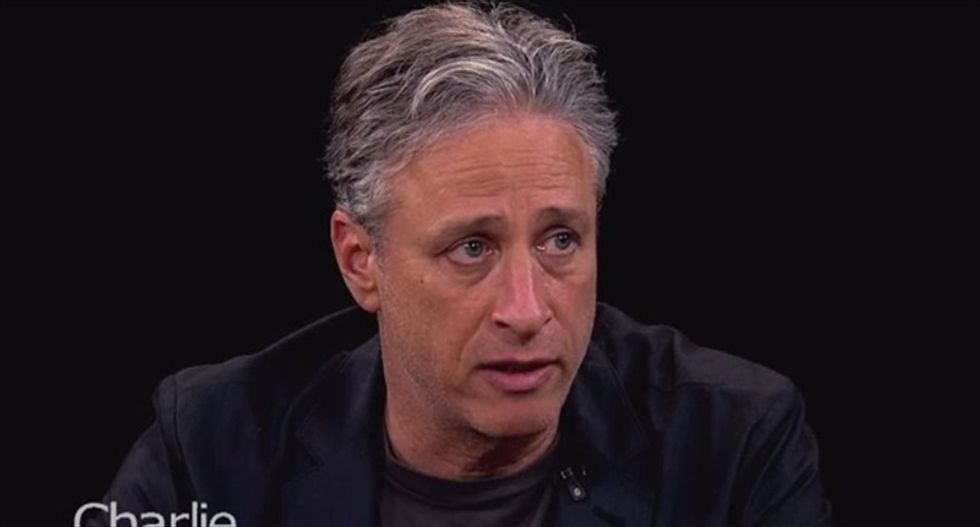 Jon Stewart’s Tuesday night announcement that he’ll be leaving the Daily Show garnered an audible cry of disbelief from his live studio audience. Stewart himself was visibly emotional: “What is this fluid?” he jokingly asked, making Frankenstein-like gestures toward his eyes and heart. “What are these feelings?”

Stewart has clearly left a mark on comedy since he took over The Daily Show’s anchor desk from Craig Kilborn in 1999. By 2003 – the year Stewart won his first Emmy award – the satirical news show’s ratings had almost tripled, with an average viewership of nearly one million people. Since then, The Daily Show has spun off no fewer than three programs (The Colbert Report and The Nightly Show with Larry Wilmore, along with HBO’s Last Week Tonight with John Oliver).

The Daily Show may never have been the legitimate news source it’s often touted to be, but above all Stewart deserves credit for repeatedly pointing out the considerable dearth of substantive content in network news broadcasts. His tenure may ultimately be remembered more for how he shook up the news media than for the laughs his show generated.

The Daily Show vs. network news

The entire show, of course, is a send-up of so-called “real” TV newscasts, and one of Stewart’s trademarks is taking media networks and personalities to task for failing to do their jobs as professional journalists. Meanwhile, Stewart also includes truly meaningful political commentary and discussion.

In fact, a study I conducted with two graduate students at Indiana University compared The Daily Show to broadcast network presidential election coverage. We found the programs to be equally substantive in their coverage – which is to say, not very substantive at all.

Stewart is clearly a comedian first and foremost (as he has often insisted). Not surprisingly, we found that the content of his coverage skewed heavily toward humor rather than substance. Nonetheless, there wasn’t any more substance in the broadcast television networks' coverage.

The study received a lot of interest from the media, and their primary takeaway was that Jon Stewart was a legitimate journalist. Stewart and Stephen Colbert were even touted as “America’s Anchors” in a Rolling Stone cover story. It’s a rather lopsided portrayal of the study – the exact sort of media malfeasance Stewart repeatedly skewers.

What does it say about network news programs when studies have shown their content to be no more substantive than a comedy show’s?

In reporting on our study, most of the media missed the cautionary message in our conclusion: that the networks’ coverage was no better than a comedy show’s.

However, that message was not lost on Stewart: he regularly critiques the news media for falling down on the job. Furthermore, in covering politicians, The Daily Show points out flaws and hypocrisies in their policies and personal behavior that professional journalists often fail to report. Stewart’s crack team of comedy writers is able to dig up footage of politicians contradicting themselves that many trained journalists with access to network newsroom resources have failed to find.

Who will hold the media accountable?

Coincidentally (or perhaps not), public trust in the media has continued to wane during Stewart’s tenure at The Daily Show (though public confidence in news media had already begun to erode before then).

For better or worse, Stewart is considered one of the most credible media personalities; many younger viewers rely on his show as their main source of political news and analysis. In the course I teach on comedic news, students are often surprised to hear The Daily Show referred to by scholars as “fake” news. It’s no small irony that Stewart’s announcement came on the same day that NBC Nightly News' Brian Williams – the highest-rated broadcast news anchor – was suspended for six months without pay for misrepresenting events that occurred while he covered the Iraq War 12 years ago.

In classic form, Stewart was quick to point out that competing news media outlets pounced on the Williams story, but failed to similarly probe their own misrepresentations about the need to engage in the Iraq War in the first place.

As Stewart quipped on his show Monday night, “Never again will Brian Williams mislead this great nation about being shot at in a war we probably wouldn’t have ended up in if the media had applied this level of scrutiny to the actual f–ing war.”

Now with Stewart stepping down, who will apply this level of scrutiny to the “real” news?