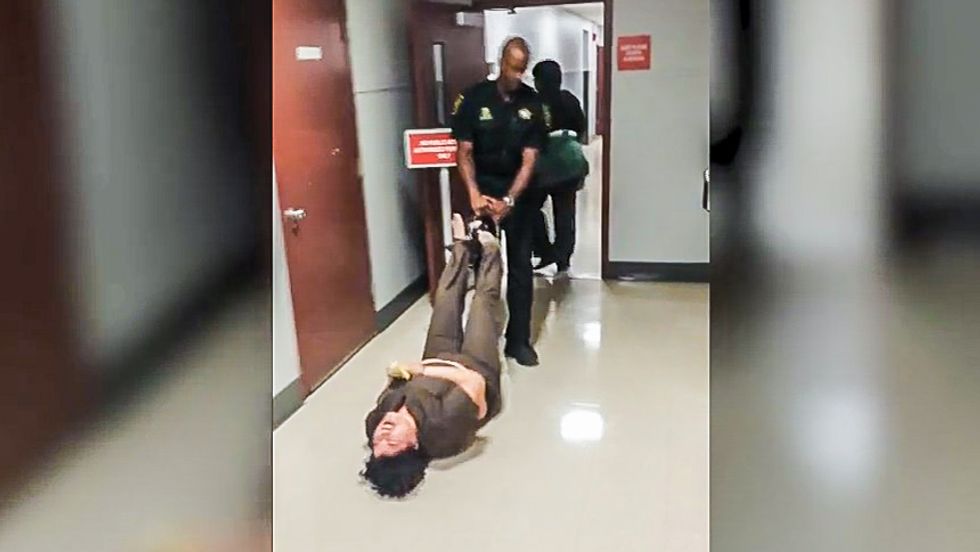 An investigation into a Florida deputy was launched this week after video surfaced showing him dragging a handcuffed mentally ill woman through the Broward County Courthouse by her shackled feet.

Attorney Bill Gelin was in the courthouse on Monday and used his cellphone to capture the dramatic video of Broward County Deputy Christopher Johnson dragging 28-year-old Dasyl Jeanette Rios down a hallway, the Sun Sentinel reported.

The court had just declared Rios mentally incompetent in a felony trespassing case. According to WSVN, Rios couldn't say goodbye to her mother after the ruling, and was taken to a hallway. When she refused to sit on a bench, Johnson began dragging her through the courthouse.

"Stop! You're hurting me!" Rios yells. "You're f*cking hurting me! I hate my life! I wish they would kill me already! Why do I have to be alive?"

"I gave you a chance," Johnson replies.

Public Defender Howard Finkelstein told the Sun Sentinel that Johnson should be charged with a crime.

"This is nothing less than treating a mentally ill patient like she's a reptile," he insisted. "It's shameful. I believe a crime was committed. For God's sake, this is 2015. We don't drag human beings down the hallway of a public courthouse. A crime has been committed and that deputy should go to jail."

Attorney Bill Gelin told WSVN that the deputy had more civilised options if the woman refused to move.

Deputy Johnson, a 27-year veteran of the Broward County Sheriff's Office, was ordered to have no contact with inmates until an internal affairs investigation could be completed.

"I am concerned by the way the deputy handled this situation, because there were other courses of action he could have taken," Broward County Sheriff Scott Israel said in a statement. "Internal Affairs has initiated a complete and comprehensive investigation, and the deputy has been placed on restricted duty pending the outcome."

"I think he should be arrested for what he did," she remarked. "He committed a battery on her, and the same way that people have to go through the criminal system and defend themselves, he needs to defend his actions, and I plan to go forward to the sheriff. This gentleman does not deserve to wear a badge."