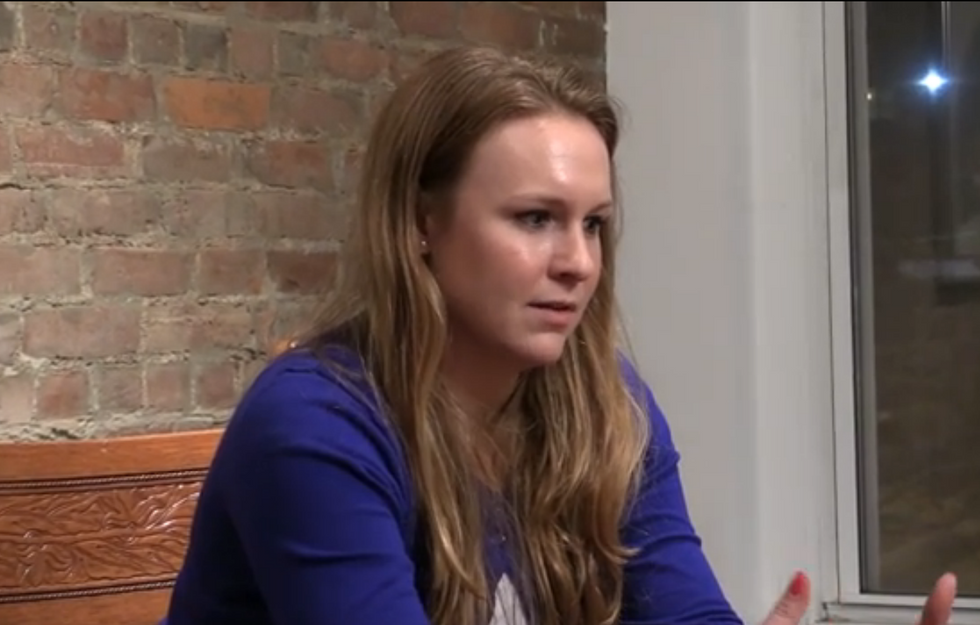 A woman who graduated from the State University of New York at Stony Brook claims that the university forced her to litigate her own sexual assault case in a student tribunal and never contacted authorities on her behalf following an attack that took place in 2014.

According to LoHud.com, 22-year-old Sarah Tubbs said that she was sexually assaulted after an alcohol-fueled party on Jan. 26, 2014. Stony Brook badly botched its handling of the subsequent investigation, Tubbs says, and she is now suing the university for Title IX violations.

Tubbs -- who graduated from the university in May -- said that after the party in 2014, at which she had played drinking games and consumed multiple alcoholic beverages, she accompanied a male friend back to his dorm room with the intention of having sex.

When they arrived at his room, Tubbs' lawsuit says, she realized she was seriously intoxicated and told her companion that she did not want to engage in sexual activity at that time.

The male student reportedly ignored her and went on to orally sodomize her without her consent, to penetrate her vagina with his fingers and to attempt vaginal intercourse.

Tubbs said that she was only semi-conscious during the attack and at some points, she blacked out altogether.

"I froze and there were parts of the night where I couldn't fight because it's not an option," she said to LoHud.

Two days after the attack, Tubbs screwed up her courage and reported the assault to campus police. She was ordered to undergo a hospital rape exam first, then to return to the campus police office and report the rape.

Tubbs said she followed instructions, and two weeks after the assault, she filed a formal complaint. However, the officer who heard her complaint reportedly told her that his department could not help her because she did not scream "No!" or physically fight back.

The officer also informed her that the District Attorney's office would react in much the same way, that if she did not violently resist, then she would likely not have a case.

University officials interviewed the male student -- who LoHud declined to name -- and in May, informed Tubbs that she had one week to prepare her case against her attacker in a student tribunal.

Tubbs, who had no legal training, was required to prepare exhibits, draw up a presentation and pursue witness testimony to make her case. Furthermore, she was required to allow her alleged attacker to cross-examine her before university officials and fellow students.

"I would say the hardest part was hearing his voice because it's the voice I hear in my flashbacks," Tubbs said. There were no police or campus security present for the five-hour tribunal in May.

Tubbs -- who was barred from bringing her therapist to the hearing -- said, "One of my biggest concerns ... was that he would get aggressive and retaliate."

Nonetheless, she went through with the hearing, which found her attacker not responsible and declined to pursue the action further.

Tubbs said that she was scarred by the experience and suffers flashbacks and has been diagnosed with post-traumatic stress disorder (PTSD). She believes that the university's method of adjudicating sexual assaults is flawed and biased toward attackers, who know that most victims would rather drop their cases than run the gauntlet of the student judiciary.

Stephen Thompson -- the sexual aggression services director at Central Michigan University -- said that the Stony Brook system of requiring purported victims to prove their case against their attackers is "about as absurd as you can possibly get."

"The harder you make it on a survivor, the less likely they're going to stay with a complaint," Thompson said.

Tubbs is suing under Title IX of the Education Amendments of 1972, the landmark education bill that outlaws gender discrimination at all educational institutions that receive federal funds. Stoney Brook is only one of 11 New York colleges and universities current facing sexual assault cases under Title IX.

In December of 2014, Stony Brook adopted a new consent policy in an effort to address campus rape problems that have come to light at universities across the country.

Tubbs said that she wants to make sure future sex assault survivors aren't forced to endure the same type of ordeal that she has been through. The student tribunals must stop, she said.

"I don't think it's the rape that makes the person a victim," said Tubbs to LoHud.com. "I think it's the systemic failure that makes someone from a survivor to a victim. I can honestly say I won't stop fighting until those systems change."